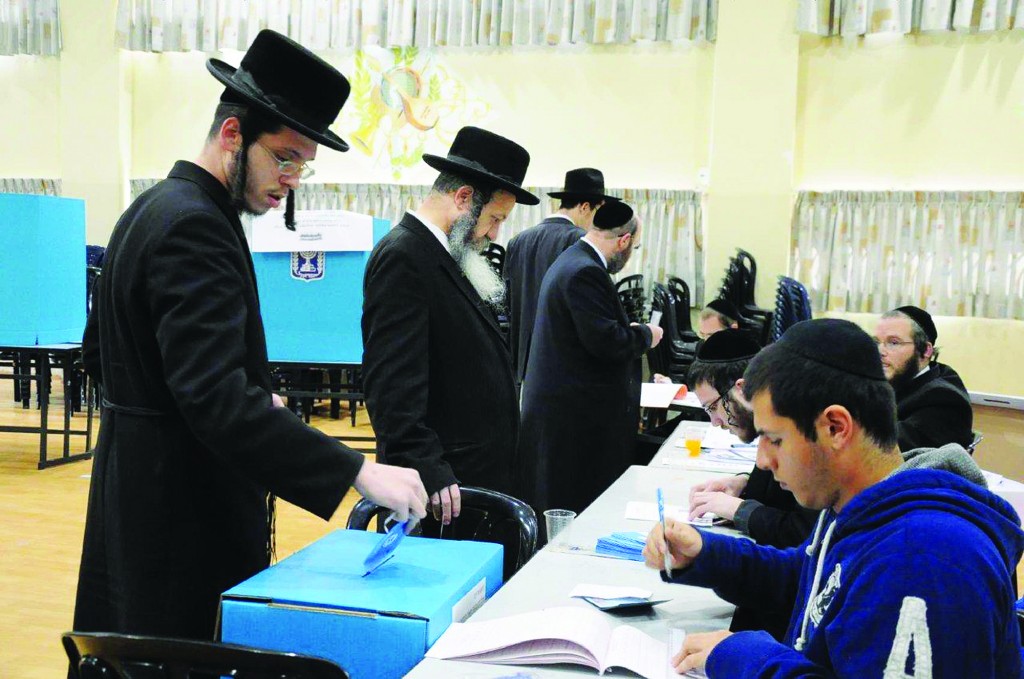 The Likud-Beiteinu party, which a few short weeks ago was looked upon as an electoral juggernaut ready to crush the fragmented and feuding center-left parties, emerged from Tuesday’s election battered, if not beaten.

Exit polls by all three major news channels indicated that Likud-Beiteinu would take only 31 seats in the Knesset — a loss of 11 from what the parties have in the current Knesset — while newcomer Yair Lapid’s Yesh Atid party came in second with 18-19, and is considered the big winner of these elections.

Labor succeeded in growing to 17 seats, up from 13 in the last elections, but apparently missed being the second-largest party, and will suffice with third place. The national religious Jewish Home garnered 12 seats. Shas and UTJ apparently both grew; at press time, Shas had gained at least one seat to 12, and UTJ was likely to end up with 7 seats up from 5. Tzipi Livni’s newly-established Movement party seems to have gained 7 seats, and the left-wing Meretz more than doubled to 7.

Kadima, which was the largest party in the outgoing Knesset with 28 seats, did not pass the threshold and will hold no seats in the coming Knesset.

Overall, the rightist bloc was projected to win a combined 61 Knesset seats versus 59 for the center-left. That meant that Israeli Prime Minister Binyamin Netanyahu would have his work cut out for him in forming a governing coalition, and that he might well face a formidable move to stop him, if opposition parties could unite to do so.

But there was far more at stake than Binyamin Netanyahu’s political career.

United Torah Judaism MK Rabbi Yisrael Eichler earlier in the day said that he was concerned about “the increased turnout in non-religious areas” during a visit to the party’s headquarters in Elad.

“This shows that the main issue in this election is not diplomatic, security or economic or security concerns but that there is a war against G-d and His Torah.”

During his election day campaign tour, UTJ MK and Deputy Education Minister Menachem Eliezer Moses said that the election was “a critical time which will determine the future of the chareidi community.”

Knesset Finance Committee Chairman Rabbi Moshe Gafni stressed that every chareidi person must vote. “This is a fateful election; no one can stay at home,” he declared.

What the electoral outcome will portend for the chareidi community was as yet unclear. Much will depend on the fierce coalition politicking which will no doubt fill the coming days.

The word from Shas was relatively upbeat.

“We should all vote to strengthen the Torah, to strengthen Judaism and the Jewish people. I turn to the Sephardim in particular to say to all who love the Torah that everyone should go and vote for the Shas movement and fulfill the commandment of strengthening the Torah.”

Shas triumvirate leader Aryeh Deri expressed satisfaction with his party’s showing, and promised to campaign for Israel’s poor in the coming government, The Jerusalem Post reported.

“We will represent the have-nots in the next government regardless of sectorial considerations. Poverty has no color and poverty has no kippah,” he said.

Whether Shas or UTJ would be part of any coalition was much in doubt, however.

A short time after the polls closed on Tuesday night, Education Minister Gideon Saar (Likud) declared Netanyahu the winner and invited all parties to join his coalition.

“Binyamin Netanyahu will be the next prime minister,” Sa’ar declared, while adding, “It’s going to be a long night.”

Final results were not expected to be announced by the Central Election Committee before 4 or 5 a.m. Israel time.

Labor Chairwoman Shelly Yachimovich’s statement on Tuesday night reflected the drama of the outcome, and just how long the night might prove to be.

“There is no doubt that in front of our eyes political drama is being stirred up, that the final results we won’t know until morning,” she said, adding that there is “a good chance of a revolution.”

She also indicated that she would be working “seriously and discreetly” to assemble a coalition to block Netanyahu from a third term.

However, Likud MK Danny Danon said that the joy of the opposition was mistaken. “This time, again, the Left doesn’t understand the results of the election,” Danon said.

“The Right bloc is the one representing the will of the people. Yachimovich shouldn’t celebrate.”

The biggest shock of the election was Yesh Atid. None of the polls since the party’s establishment last year predicted such a strong showing for the anti-chareidi, former journalist Yair Lapid. Labor and Jewish Home were rated ahead of the fledgling candidate. Yet, overnight it appeared that he was to become the head of the second largest party in the country.

Yesh Atid candidate Adi Kol claimed that the party was “absolutely the source of the higher voter turnout,” as he told The Jerusalem Post.

The surest indication of Lapid’s new status was the phone call he received from Netanyahu on Tuesday night. According to Ynet, he told Lapid: “We have a chance to do great things for the State of Israel.”

Several hours before that, on Tuesday afternoon, apprehension had mounted at Likud-Beiteinu headquarters that the high voter turnout would favor the center-left opposition and possibly jeopardize their hold on power.

“Likud’s rule is in danger,” Netanyahu warned two hours before the polling stations were due to close at 10 p.m. in a late appeal for support described by Reuters as “frantic.”

“There are reports that in regions that have traditionally been Likud strongholds, turnout has been lower than the national average,” Netanyahu said during a visit to a polling station in Ashdod. “I therefore call on all generations of Likud voters to drop everything and go vote.”

“It isn’t by chance that Netanyahu is stressed,” Yachimovich said late on Tuesday afternoon. “The voter turnout is astounding and … indicates that a transition is coming. It proves that [people] want to see a different government and a different prime minister in power.”

In the Arab sector, the turnout was higher than expected, the Post reported. Arab leaders had told their constituents that staying at home would be a passive vote for a right-wing, anti-Arab government.

Although the polling was generally peaceful and orderly, the police reported that by late afternoon they had received approximately 350 reports about irregularities or possible voter fraud, which they were investigating.

The CEC began tallying votes after the polls closed, at 10 p.m. All the votes are counted at their respective locales, and then checked to ensure that the results add up. Then the results are uploaded to a centralized computer system.

Around 4:00 or 5:00 a.m. CEC expects to have near-final results, barring special votes such as soldiers and hospitalized voters.