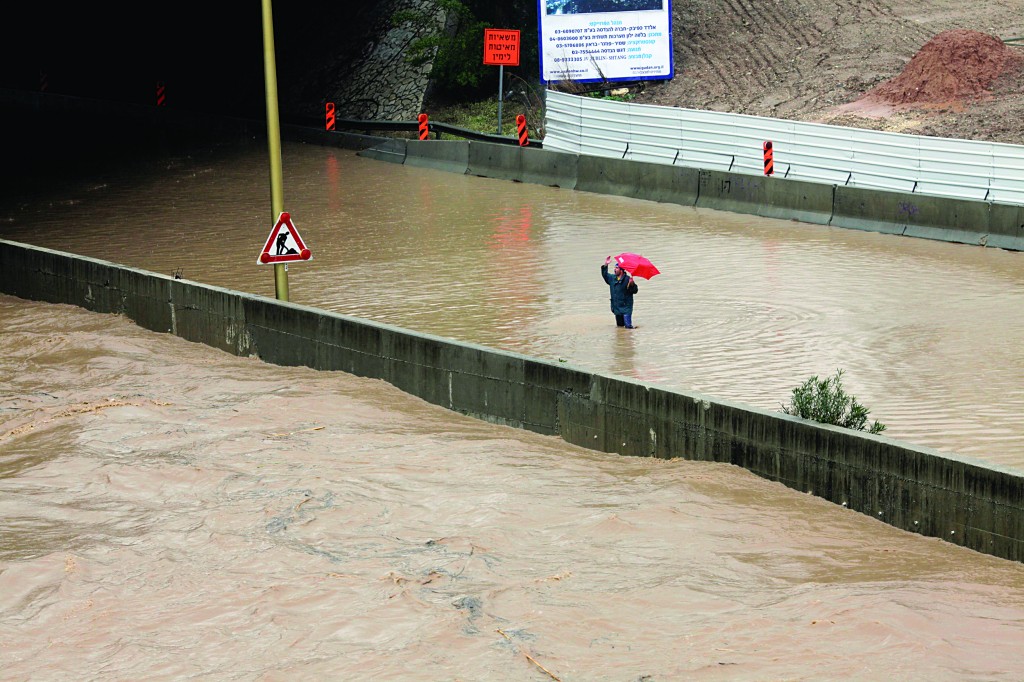 A storm-soaked Israel staggered through another day of road and rail closings on Tuesday, as the country braced for even more severe weather on Wednesday, including the possibility of snow in Yerushalayim and elsewhere.

Tel Aviv was declared “Under Water” in a Jerusalem Post headline. The city’s main artery — the Ayalon Highway, or Highway 20 — as well as the city’s train stations were shut down due to flooding on Tuesday morning, but reopened in the afternoon.

By early Tuesday morning, the Tel Aviv municipality reported it had already responded to 521 storm-related incidents since the end of last week, including flooded apartments and yards, fallen trees and branches, obstacles blocking roads, fallen traffic lights and signs, objects falling from roofs, and torn cables.

The Yarkon and Ayalon Rivers in the Tel Aviv area were swollen to capacity and at risk for continued flooding. The city said it was ready to provide shelter for people forced to leave their homes.

Dozens of people were rescued by emergency responders in flooded locations around the country.

An Israel Air Force team from Unit 669, the special search and rescue division, rescued 15 people who were trapped on the roof of their building in Baqa-jatt, near Haifa, after the area was flooded. They were taken off the roof and evacuated to Hillel Yaffe Medical Center in Hadera in mild condition.

Another 699 unit was called to Lake Alexander, north of Netanya, to rescue seven people who escaped the rising water levels by climbing to the roof of their car. They were taken to Meir Hospital in Kfar Saba suffering from mild hypothermia, Ynet reported.

The Herzliya train station was again closed in the morning, and operations in the entire railway system were slowed. Israel Railways asked the public to refrain from riding the trains where possible and announced that regular overnight routes were cancelled for inspection and repair.

Several main roads in the north and center of the country were also flooded out.

Travelers arriving at Ben Gurion Airport on Tuesday discovered that the rail shuttle  to and from the airport had been disrupted by weather conditions. Israel’s Airport Authority has organized buses to Tel Aviv free of charge from the airport. In the Negev, the storm also produced other effects. The Environmental Protection Ministry issued a cautionary for vulnerable populations — heart or lung patients and the elderly — to stay indoors, away from the dust storm.

High winds were felt all over the country, reaching velocities of about 50 miles per hour in the north and center, according to the Israel Meteorological Service (IMS).

The IDF was adapting to weather conditions as necessary. The  Northern Command has stocked bases with enough food for a week without resupply.

Maj. Sharon Ozolai, an engineering officer on the northern border, said every soldier has been issued a storm suit, a snow suit, and warm gloves.

With temperatures continuing to drop on Wednesday and Thursday, there is a good chance of snow all the way to Yerushalayim and perhaps as far south as the Negev, the IMS said.