Prime Imam On a Mission 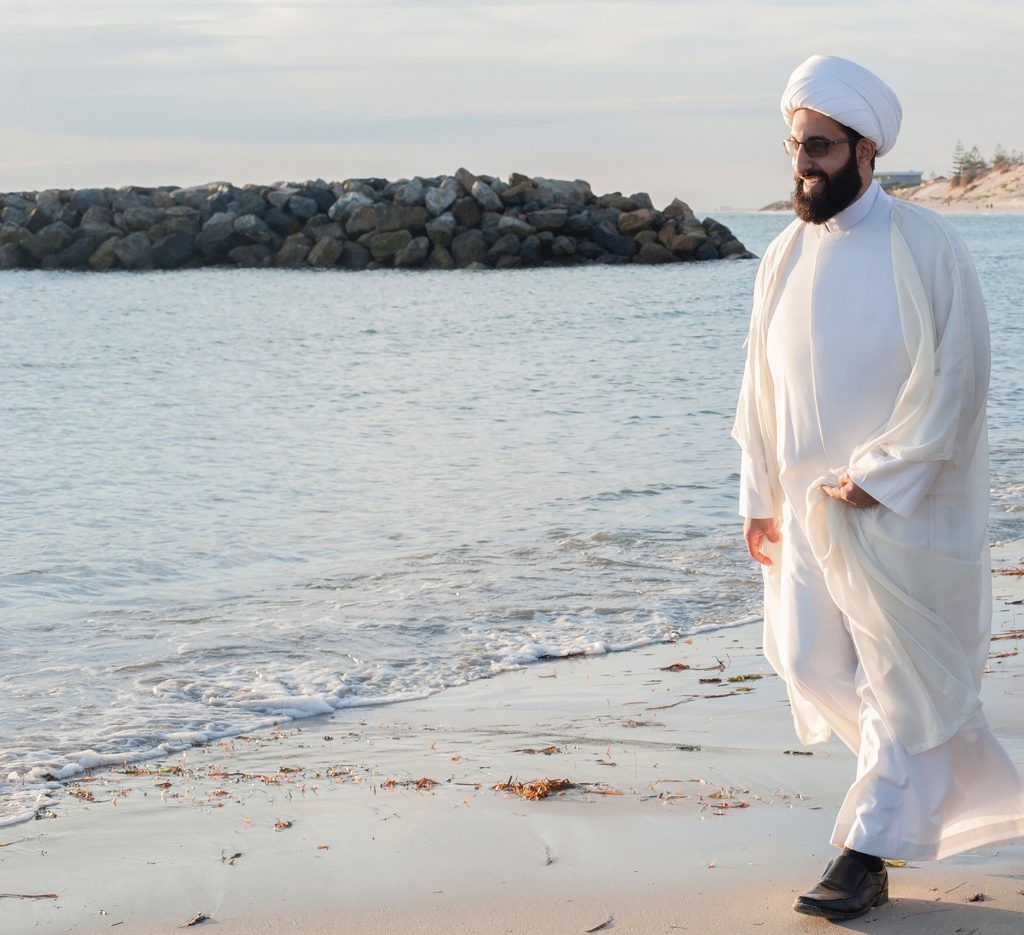 An Interview With Imam Mohamad Tawhidi

The flowing robe, turban, and thick dark beard of Imam Mohamad Tawhidi recall the ayatollahs he studied under in Iran, his birthplace. Although he immersed himself in Islamic studies in the Iranian Al-Mustafa International University, the similarity ends there. An Australian citizen since 1998, Tawhidi is known as the self-proclaimed Imam of Peace, the celebrated cleric turned Islamic reformer.

As a Shia imam, Tawhidi is proud of his lineage of scholars and grand ayatollahs of Iraqi descent, which he says stretches back to the companion of the founder of Islam. A noted author, Tawhidi spoke with Hamodia during a New York visit, in part arranged by Americans Against Anti-Semitism.

Tawhidi is no stranger to controversy. As a Muslim cleric unafraid to speak out against other Muslim clerics, he comes in for his share of criticism. However, he presses back against critics who question his background and in particular his quitting his university studies. “Al-Mustafa is not a university,” Tawhidi explains, “but rather the headquarters for over 2,000 universities. I dropped out of a school under Al-Mustafa because it was ideologically a Hezbollah training camp. It was the best decision I made in my life to leave this extremist school.”

The young cleric’s ideological transformation was a gradual one. While in school, he began questioning the views of the “extremist fundamentalists who blamed everything wrong on the Jews.” Losing family members in Iraq to ISIS later convinced Tawhidi that he “wasn’t going down that road” of radicalism.

But when I ask the Imam if he is considered a renegade Muslim, Tawhidi emphatically says no. “I am not a renegade. I am a traditional Muslim cleric. I can go into any mosque and lead in prayers. I had a mosque and I still have a congregation of over 1,500 people. Although I’m tolerant, I am not a secular person or a liberal.”

Regarding his opinions on Israel and the Jews, Tawhidi insists that he is rare in that his interpretations of the Koran are the authentic ones and in variance with others who misinterpret them. His interpretations do not “stray away from the fundamentals of my faith” and are the source of both his questions and answers.

“I started asking questions about the Jews. I have been taught that the Jews are the enemies. We cursed the Jews, Israel, and America after every prayer when I was in school. I began asking, ‘What have they done to me?’ So I started reading the Koran. I am a Shia Muslim and realized that I have ties in Mecca and Medina and elsewhere, but there is nothing that connects me to Palestine. We have in the Koran the idea that Israel and Jerusalem belong to the Jews.”

Pointing to the Al Aqsa Mosque in Jerusalem, Tawhidi says the founder of their faith could never have visited it because it was built after his death. “But when I approached my teacher to point it out I was told to be quiet.”

Herein lies the problem, Tawhidi explains. “One verse makes an army. They use this to link it to politics and claim it’s theirs. They will die for it. I’m not interested in the politics; I’m interested in the religion. If there is nothing that connects me to Palestine then why am I dying for it? It’s like saying, let’s die for Seattle or Las Vegas.”

But it was his personal interaction with Jews that ultimately transformed Tawhidi’s opinions of them. After Tawhidi began to publically criticize Islamic extremists, he was vilified. “I was seriously attacked, as were my family and everyone attached to me. Muslims were silent, and the left, the media, and politicians were all against me. The only community that stood by me was the Orthodox Jewish community.”

A random act of kindness by an Orthodox Jew later cemented Tawhidi’s resolve to defend the Jews. When his car broke down one rainy night on an Australian Outback highway, the only one who stopped to help was an Orthodox Jew. Initially loathe to accept help from someone “we consider impure and were taught to hate,” Tawhidi demanded, “Are you a mechanic?” Ultimately, accepting assistance from the Jew helped disabuse him of misconceptions and prompted him to seek clarification from Orthodox rabbis. This led him to conclude that “our theology is very similar. We believe in one G-d.”

Gradually, the Imam has become one of the most prominent Muslim voices both on mainstream and social media, speaking out against Islamic extremist ideology and anti-Semitism. “Anti-Jewish sentiment starts with Muslim theology and jurisprudence, and then Islamists come and try to coopt it for their politics. So much brainwashing has led to the idea that Jews are the problem of everything on the planet. The outcome is not only anti-Semitism, but the idea of annihilation. Jerusalem is just a small issue that is part of a serious agenda over many, many years. What drove the Mufti of Jerusalem to shake Hitler’s hand? He believed it was his religious duty.”

I ask Tawhidi what bothers other Muslims most about him and he immediately points to his use of the English language and his ability to express himself through the media. However, Tawhidi differentiates between censorious extremist Muslims and moderate ones, many of whom think like him. “The amount of clerics, sheiks and grand ayatollahs that contact me is not tens but hundreds. You’d be surprised. The grand ayatollahs contact me through their sons because they don’t want a direct contact.”

But why the silence, I ask Tawhidi. Among the 1.6 billion Muslims, why aren’t the moderate ones more vocal? Tawhidi explains that many are afraid for their own safety or for their position because they rely on religious centers to pay them. Others might face a language barrier or have no access to the media.

When asked about his own safety, the Imam relies on the integrity of his mission to protect him. There is no fatwa put on him like Salman Rushdie because, in addition to “knowing too much,” his beliefs do not defy the Koran. “I am not violating G-d by quoting the Koran’s references to Aqsa Mosque’s sacredness but not its location in Jerusalem.”

Yet, Tawhidi admits that his beliefs are targeted because they threaten the Muslim political and paramilitary rallying cry. “They are bothered with me because I am pro-Jewish rights and pro-Israel. They have a problem with Israel today. If the war was between Muslims and Christians, like at the time of the Crusades, visiting a church would be seen as traitorous and tarnishing the image of our religion. Today the war is between Muslims and Jews.”

What about persecution of Christian minorities in Muslim countries? “Muslims can easily blame attacks on Christians on ISIS or al-Qaida,” he responds. “But when Hamas attacks, the Muslims say they have the right to because the Jews started it and took their land. Even those Muslims who talk about interfaith dialogue, in the bottom of their hearts they don’t wish for a Jewish state to exist. It’s hypocritical and the reason I never attend them.”

When I shift the focus to Muslims in American politics and the controversy surrounding Congresswomen Ilhan Omar and Rashaid Tlaib, the Imam becomes passionate. “When I first heard two Muslim women are running for Congress I was so happy because I thought this was now the opportunity for Muslims to have a voice other than the voice of ISIS and return us to pre- 9/11 days in America. But when they got elected and all their politics focused on the Jews, who are such a minority, I realized this is exactly what I ran away from. Now we have the same situation, except with lipstick. I knew immediately that these people are promoted by CAIR [Council on American-Islamic Relations] and similar organizations.”

Tawhidi claims Omar and Tlaib have “disappointed many Muslims.” But he stresses, “I’m not here to fight Ilhan, because she’s not just Ilhan. Ilhan is an ideology. If she goes, tomorrow someone else will take her place. I’m criticizing what that ideology breeds.”

That ideology, I point out, has a champion in quite a different sector. When I ask Tawhidi to explain the irony of the political alliance between Islamists and leftists, whose contradictory religious and social belief system diverge on everything but a common anti-Zionist and anti-Semitic creed, he maintains that’s nothing new. “This strategy has existed in Islam for many, many years, from the time of the prophet Mohammed.”

Muslims enlist the help of others who may stand for everything they oppose and pay them to fight their wars, Tawhidi explains. “This alliance is the same as with the Democratic Party. They are using the Democrats as a vehicle. If it wasn’t them they would find another party and pump it with millions to fight for them.”

I ask if leftist pushback against President Trump is driving the fight. “The leftists like anyone who is against Trump, no matter who,” Tawhidi says. “White Christians who oppose Muslims will still vote for Omar just because she’s a Democrat. Anti-Semitism thrives in this atmosphere. Omar believes that she can get away with anything, and no matter what she says, like the [comment she made about] ‘Benjamins,’ they will be biased in defending her.”

This is why leftist politicians and the media quickly resort to charges of Islamophobia while defending Omar and others like her. Tawhidi decries this hypocrisy. “Many Muslims are killed by other Muslims and the media doesn’t like to talk about it. That’s not Islamophobia. I don’t believe that there’s such a thing as Islamophobia. Phobia is an irrational fear. Fear of ISIS is not irrational.”

Tawhidi believes this politicizing of Islam is the greatest threat today, whether in America or in the Middle East. Regarding the Israeli-Palestinian conflict, he identifies the indoctrination of Palestinians against Jews by their leaders as the real culprit. “They are completely indoctrinated. There is no other focus. Little boys who are interviewed in the media and asked what they want to be, answer, ‘I want to kill Jews.’”

Tawhidi is convinced Trump’s Mideast peace plan will fail. “Abbas would rather die than look like a coward in front of his people.” He is equally skeptical about the lure of anticipated economic incentives, pointing to the huge amounts of money Hamas receives from Qatar and spends on rockets and tunnels, instead of their people. “The people are hungry but Hamas openly doesn’t care about the people. The Iranian people are starving because Iran is giving money to Hamas and Hezbollah.”

“They don’t need money,” Tawhidi insists. “Why would you offer them money?” The only way to “wake them up” is to “treat them the same way they are treating their starving people” and sanction them, like America is doing to China, North Korea and Iran. “If you cut the foreign aid and then offer them money with expectations, then they will respond.” And he underscores that the real threat in the Middle East is coming from the Shia militant Islamism of Iran and Hezbollah.

The Imam of Peace is working to reform this very threat of militant Islam. Emphasizing how “everything that happens in Washington has a direct influence on the global narrative,” much of his efforts are concentrated in America. Tawhidi plans to launch an organization and educational program to educate a new generation of Muslims and save them from radicalization. With his platform already reaching millions of people, Tawhidi seeks to prevent others from rewriting history and distorting the truth. “CAIR is not the only voice,” he declares. “I also want a voice.”