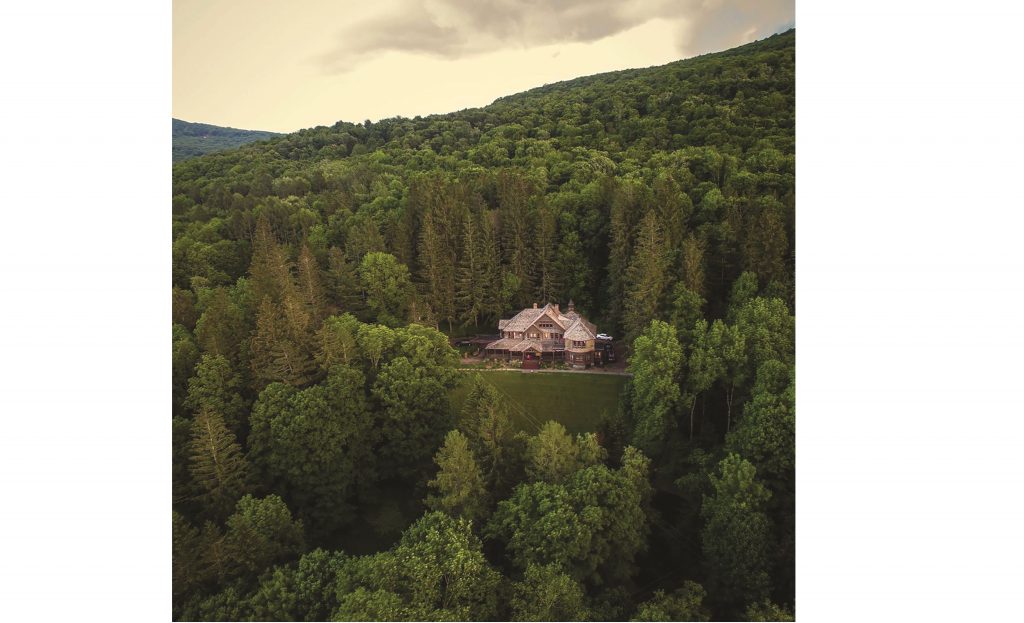 Shady Brook Bungalows in the Catskill Mountains hosted the families of some of the great talmidei chachamim of the time, among them Harav Leib Malin, zt”l, Rosh Yeshivah of Beis Hatalmud in East New York and Harav Yisrael Chaim Kaplan, zt”l, Mashgiach of Beis Medrash Elyon in Monsey. The bungalow colony was a ‘beis vaad lachachamim,’ where the Torah leaders spent their bein hazmanim rejuvenating with their families.

A young [Harav] Naftali Kaplan, shlita, today a Rosh Yeshivah in Beis Hatalmud, sat reclining in a chair, his gemara propped in his hands as he learned in a relaxed position. As Harav Leib Malin passed by, he gazed at the young bachur with a look of dismay and chastised him for what he perceived as a lack of kvod haTorah. “Azoi lernt men? — Is that how one learns?” he asked.

“Nein, azoi dachet men — No, this is how one vacations,” the young bachur countered.

Fuhren oif dacha, or the time Gedolim spent in an environment where they could breathe crisp air, take a refreshing walk and relax a bit was not seen as taking a break from their limud haTorah or avodas Hashem, but rather as a means to revitalize their bodies and invigorate their spirit in preparation and anticipation of the upcoming months.

In Line With Their Inclination

“When my father was learning in the Mir during the 1930s, he traveled with several other American boys to a resort area in the mountains for a bit of a vacation,” Harav Moshe Yosef Scheinerman, shlita, said about his father, Harav Elchanan, zt”l. “As American boys, they exercised and spent their time enjoying the fresh air. One day, Harav Yerucham Levovitz, zt”l, the Mashgiach of the Mir, came to visit them. Rav Yerucham was very attached to them and said special mussar vaadim for the Americans. When he arrived, the bachurim quickly grabbed their hats and jackets, and surrounded the improvised stage that they’d set up for the Mashgiach to address them. Before he began, Rav Yerucham instructed the bachurim to make themselves comfortable by removing their hats and jackets, and insisted they sit down as well. He understood that they were there to relax, and he did not want to interrupt it by imposing a serious atmosphere.”

After his mother passed away in 5759/1999, my father-in-law, Reb Pesach Nagel, emptied the contents of her apartment and brought them into his house. Boxes of sefarim were stacked on the table, and he offered his children and their spouses to choose anything they wanted. An ancient Chovos Halevavos with German translation caught my eye, and he promptly handed me the sefer as a keepsake. As we perused the boxes, I discovered another sefer that piqued my interest. Sefer Avodas Levi, authored by Harav Yaakov Yitzchak Ruderman, zt”l, in 5690/1930, seemed oddly out of place in Opapa’s collection. As a product of Oberland, the highlands of Czechoslovakia, it seemed odd that he would posses this sefer written by a Litvishe Gadol.

“This sefer has quite a story behind it,” my shver said. “But first, let me show you a piece in the sefer that will surprise you as well.” He turned to Siman 23, which was a letter written in 5688/1928 to Harav Yissachar Shlomo Teichtal, zt”l, Hy”d, who was then the Rav in Pishtian (Piešťany), Czechoslovakia, which happened to be the hometown of my shver. Rav Teichtal had sent his sefarim, Mishnas Sachir and Tov Yigal, to Rav Ruderman, and as was customary, Rav Ruderman reviewed them and responded with his thoughts on some subjects in the sefarim.

“You are probably surprised why Rav Teichtal sent his sefarim to Rav Ruderman, and why he responded,” my shver said. “Well, Pishtian was a resort town which had wonderful hot springs, and many people visited there during the summer months, especially those who sought relief from their pain from rheumatoid arthritis. Rebbetzin Ruderman suffered greatly from this malady, and they stayed in Pishtian for a while and boarded by my parents. While the Rebbetzin utilized the therapeutic baths of the hot springs, Rav Ruderman headed to the home of the Rav and they spent hours speaking in learning. Later, they continued their discussion through correspondence.

“How my father received Rav Ruderman’s sefer is connected with one of these visits to Pishtian. One day, Rav Ruderman’s only child, Chana, wandered off, nowhere to be found. The townspeople combed the entire neighborhood, but she seemed to have disappeared. My father refused to give up, and he scoured every nook and cranny, and finally found her in a cellar, where she had fallen through a trap door which opened to the street. The Rudermans couldn’t stop thanking my father, and insisted that if he was ever in their area, he must come and visit them in their home.

“In 5790/1930, Rav Ruderman moved to America, and in 5693/1933 he opened Yeshivah Ner Yisrael in Baltimore. After my parents immigrated in the early 1950s, they decided to pay a visit. Rav Ruderman welcomed them warmly, and as they reminisced, he gave my father a copy of his wonderful sefer, which contained his thoughts on the sefarim of Rav Teichtal.”

“It’s interesting that you mention how Rav Ruderman spent his vacation to speak in learning with the Rav of the city,” I said. “I remember how a bit over a decade ago, I saw him in Camp Agudah as he spoke in learning for hours with Harav Mordechai Gifter, zt”l, the Rosh Yeshivah of Telshe in Cleveland. Although the camp had one guest suite for their ‘Shabbos Gadol,’ they were forced to refurbish a second one because Rav Gifter insisted that he wanted to spend his vacation speaking in learning with Rav Ruderman.”

Rav Gifter had another distinctive practice during his annual stay in Camp Agudah. Unlike others, he insisted on davening each morning together with the “Junior Minyan,” where the youngest bunks davened each day. The innocence of the tefillos of these youngsters brought special satisfaction to the Telshe Rosh Yeshivah. “Perhaps if we had something like this in Europe, which infuses the young children with such joy for Yiddishkeit, we would not have lost so many of them to the various ideologies of the times,” Rav Gifter once remarked.

The Brisker Rav, Harav Yitzchak Zev Soloveichik, zt”l, suffered from asthma, and would spend several weeks each summer convalescing in Krinitza (Krynica-Zdrój), Poland, a town where the fresh mountain air and the mineral spa made the resort a favorite of many Gedolim.

One summer, the Brisker Rav met Harav Baruch Ber Lebowitz, zt”l, the Kamenitzer Rosh Yeshivah and a prime talmid of the Rav’s father, Harav Chaim Brisker, zt”l. When Rav Baruch Ber told the Rav that he felt the air in Krinitza was extremely good, the Rav expressed his surprise. “I suffer from asthma, so I can judge the quality of the air. But how do you know that the air is so good here?” he asked.

Before the talmidim of Telshe Yeshivah would leave for their summer break, Rav Gifter would tell them, “Bein hazmanim iz far di kleine masechtelach — the intersession is best used to learn some of the small masechtos [on your own].”