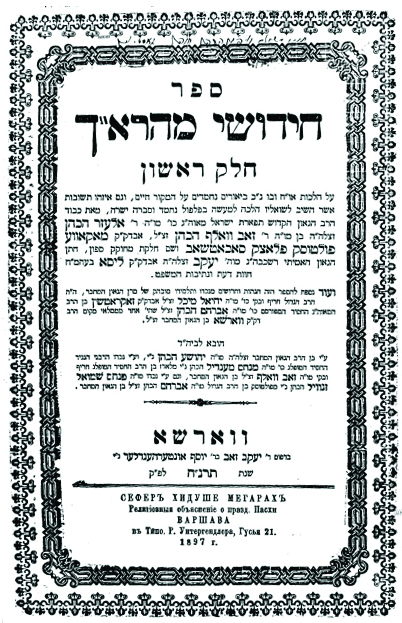 Harav Elazar Hakohen of Poltosk was the son of the wealthy Rav Zev Leipziger, and son-in-law of Rav Yaakov Luberbaum, Rav of Lisa and mechaber of the Chavas Daas and Nesivos Hamishpat.

Reb Elazar was a devoted talmid of Harav Simchah Bunim of Peshischa, Harav Menachem Mendel of Kotzk and the Chiddushei Harim of Ger. After the petirah of the Chiddushei Harim, he was among those who did not transfer his allegiance to Harav Chanoch Henoch of Alexander, but instead followed Harav Avraham Landau of Tchechnov.

He considered  Harav Zev Wolf Hakohen of Lask his main Torah teacher, and he also studied under his renowned father-in-law. Raised in great wealth, he did not accept a rabbanus until his vast business dealings failed; then he became Rav in Makov.

He served as Rav there twice; he also served in Sochotchov, and twice in Poltosk, and his chassidim referred to him by that name. Twelve years before his petirah he returned to Sochotchov, where he was niftar at the age of 90.

He was eulogized by Harav Yisrael Yehoshua Trunk of Kutna and Harav Chaim Eliezer Waks of Pietrokov-Kalish.

He wrote many sefarim, including Chiddushei Maharach on the Shulchan Aruch; a commentary on Pirkei Avos; Zecher Tzaddik V’yesod Olam, a eulogy on the Chiddushei Harim; and Zichron Nifla’os on the Haggadah.

His two sons were Harav Avraham, a Dayan in Warsaw; and Harav Tzvi Hirsch, an Av Beis Din in Zgierzh. His son-in-law was Harav Dovid Dov Meislish, Av Beis Din of Lask.

In 1854, the “Charge of the Light Brigade” took place during the Crimean War as an English brigade of more than 600 men, facing hopeless odds, charged the Russian army and suffered heavy losses.

In 1859, radical abolitionist John Brown went on trial in Charles Town, Va., for his failed raid at Harpers Ferry. (Brown was convicted and hanged.)

In 1918, the Canadian steamship Princess Sophia foundered off the coast of Alaska; some 350 people perished.

In 1929, former Interior Secretary Albert B. Fall was convicted in Washington, D.C. of accepting a $100,000 bribe from oil tycoon Edward L. Doheny. (Fall was sentenced to a year in prison and fined $100,000; he ended up serving nine months.)

In 1960, the Bulova Watch Co. introduced its electronic “Accutron” model.

In 1971, the U.N. General Assembly voted to admit mainland China and expel Taiwan.

In 1983, a U.S.-led force invaded Grenada at the order of President Ronald Reagan, who said the action was needed to protect U.S. citizens there.