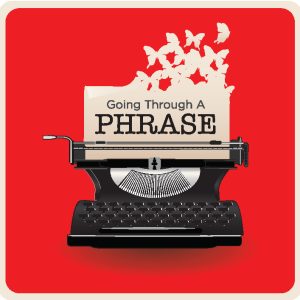 Call me a perfectionist (thank you), but whenever I write, edit or proofread, I keep my reference toolkit close at hand.

Along with essential dictionaries, thesauruses and usage manuals, I keep Hamodia’s style sheet open and ready. It helps me avoid such bloopers as having three different spellings of the same word or, worse, the same name.

As indispensable as the style sheet is, I have to admit that I was puzzled by one entry that seemed to have split the same word into two:

They seemed to be just variant spellings of the same word. What’s the difference?

So I followed the watchword, “You could look it up.” And I discovered that I had underestimated the framers of the style sheet.

In The Joys of Yiddish, Leo Rosten defined shmooze as:

So the origin is Hebrew, not German, which would make the common spelling “schmooze” a mistake.

But the game changer here is “in time.” To switch metaphors, it’s a signpost to the watershed — where the meaning diverged into two separate streams.

Things and words change over time. In Semantic Antics, Sol Steinmetz wrote that one of the ways words change is “transfer or extension of meaning.” For example, “In the 1400s the word summit meant literally ‘the topmost part, as of a mountain or hill.’ Later, the meaning was transferred to the figurative sense, ‘the highest point or degree, the acme,’ as in ‘He’d reached the summit of happiness.’ The meaning was further extended in the 1950s to ‘the highest political level.’”

Thus, the mountain top led to the summit meeting. It could be held in a basement and still be called a summit.

The concept of shmuess maintained its connotation of listening (though not its spelling).

“1. Any serious talk or discussion on a moral or ethical issue: SERMON … 2. An informal conversation: CHAT. … 3. To converse informally; to chat or prattle: CHATTER. … 4. shmooze out — To scold mildly: CHIDE.”

Guy Kawasaki was one of the original marketing team that made the Apple Macintosh (not the McIntosh apple) a household word. One of their strategies was what he called “The Art of Schmoozing” — networking on steroids.

Shmoozing, Kawasaki said, is “The process of building … social connections. … If you’re hesitant about this, because you’re shy or you consider it offensive or manipulative, you need to change your mind.” Good shmoozers “want to know what they can do for you, not what you can do for them. If you understand this, the rest is just mechanics.”

Sadly, like many good ideas, shmoozing went from buzzword to buzz saw.

A New Yorker cartoon shows two businessmen in a restaurant. One, punctuating his words with his stem glass, says: “Trust me Mort — no electronic-communications superhighway, no matter how vast and sophisticated, will ever replace the art of the schmooze.”

Allan Metcalf (recently retired executive secretary of the American Dialect Society) wrote, in Predicting New Words, about Professor Paul Lewis, who coined “Frankenfood, a scary word for genetically modified foods.” Following on that success, Lewis coined “schmoozeoisie, a combination of schmooze and bourgeoisie. ‘This is that class of people who earn their living by talk. It includes such traditional groups as teachers and therapists, but it’s expanding. … Government is all schmoozeoicrats taking trillions and giving back words.”

Michael Wex says (what he spells) shmoos is “a real conversation, begins with the idea of partnership. It’s no accident that shmoos comes from a Hebrew word that means ‘tiding, rumor’; something that you’ve heard rather than something that you’ve said.” He mocks the Merriam-Webster definition “to chat in a friendly and persuasive manner especially so as to gain favor, business, or connections”; calling it “careerist nudnik-ery” that contradicts the meaning of the original.

The art of the shmuess is empathic listening.

The first time I spoke with the Amshinover Rebbe, shlita, I was startled by how he listened. He was listening more actively than I was speaking. He was hearing even what I didn’t say.

Of course I can’t reach that level. But even this New Yorker can try to do more than just keep quiet, waiting for the other guy to finish … so I can get back to what I was saying.

So there you have it. Shmooze is all talk. Shmuess is all ears.

And when you can balance them … ah, now you’re talking!