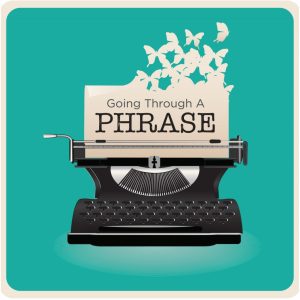 One of the worst things about a cold (I’m feeling much better, thank you, and thank G-d — not necessarily in that order), is that it’s so infernally undignified. I’m not complaining, mind you … I count my blessings.

I think one reason the sniff-hack-kerchoo (definitely a case for Dr. Seuss) is so low down the totem pole of ailments, is the terminology. How seriously can you relate to something called “the common cold”?

Oxford English Dictionary has citations going back to 1712 for the phrase “catch one’s death of cold.” But it’s understood to be an exaggeration.

William Safire began a column, “My eyes water as I write this: I am afflicted with coryza. That’s a fancy but time-honored name, pronounced ‘kuh-RYE-zhah,’ for what some doctors call the common cold.”

Safire said that doctors “never use the words common cold in front of patients, nor do the sniffling sufferers call what they suffer from a common cold, because common trivializes the ailment.”

But why is it called a cold? “That name for a disease causing inflammation of the nasal mucous membrane was called a cold because it was associated with chills, a frequent concomitant of fever. But what do you call a cold when it is unaccompanied by a chill?”

Safire’s friend and fellow journalist Alistair Cooke suggested flu or catarrh. Safire explained, “Catarrh is rooted in the Greek for ‘to flow down,’ and has nothing to do with chills and fever; it is a more accurate description of a runny nose. …” Flu is “a more serious and sometimes killing respiratory disease, which some people — who wouldn’t be caught dead with anything as common as a cold — like to call their sniffles.”

“Hashem gives it to us to see if He can have an influenza on us.”)

There is a more scientific name for the common cold. Ever see a rampaging rhinoceros? The word comes from the Greek rhin — nose, and keras — horn. The rhino’s viral etymological cousin is what makes us take it on the nose. Harvard Health newsletter says that “200 specific viruses that can cause the common cold have been identified. The virus family that causes the most colds is called rhinovirus.” So it’s a family feud between us and the rhinovirus.

Scientists proclaim that cold is a misnomer for the rhino attack. The Harvard newsletter says, “There is no evidence that going out in cold or rainy weather makes you more likely to catch a cold.” And Yale agrees. The “Mythbusters” column in Yale Scientific magazine said that cold temperature has nothing to do with catching colds. “Despite popular belief, it is not, however, guilty of causing you to cough and sneeze all night, causing your throat to hurt, or causing your sinuses to weigh 10 pounds. Correlation does not always imply causation, and cold weather does not cause the common cold.”

Smithsonian Smart News reported a study that throws a (dry) blanket on the cold exposé and shows there is something to the old belief. (Pardon my not citing the long-winded title and nine authors of the study; it would eat up my word count.) Their bottom line: the rhinovirus thrives and reproduces best at cold temperatures. “Thus, cooler temperatures can enable replication of the common cold virus, at least in part, by diminishing antiviral immune responses.”

I don’t know if the scientists at Yale talk to each other, but New York Times science columnist Carl Zimmer (Wall St. Journal lingwizard Ben Zimmer’s older brother) wrote, “Scientists have never been sure why [rhinoviruses] are so effective, but now a team at Yale University may have found a clue. The scientists argue that rhinoviruses have found a blind spot in the human immune system: They take advantage of the cold air in our noses.” (Stay tuned for brother Ben’s unraveling the confusion over the term “antibiotic,” you shouldn’t need it.)

It hurts to remember, but back in the ’80s, for a long time — too long — I had dropped out of touch with Rabbi Shlomo Carlebach, z”l. Then we met at a wedding and he started to give me a hug. I stepped back and told him, “I have a cold.”

He frowned and said, “Don’t be so cold.”

The best remedy is one I heard from a doctor. But he didn’t prescribe it. It was prescribed to him.

The doctor was close with the previous Amshinover Rebbe, zy”a. Once, the doctor came to speak with the Rebbe and he — the doctor — was coughing. The Rebbe told him:

“You need tea and Tehillim. But both have to be hot.”