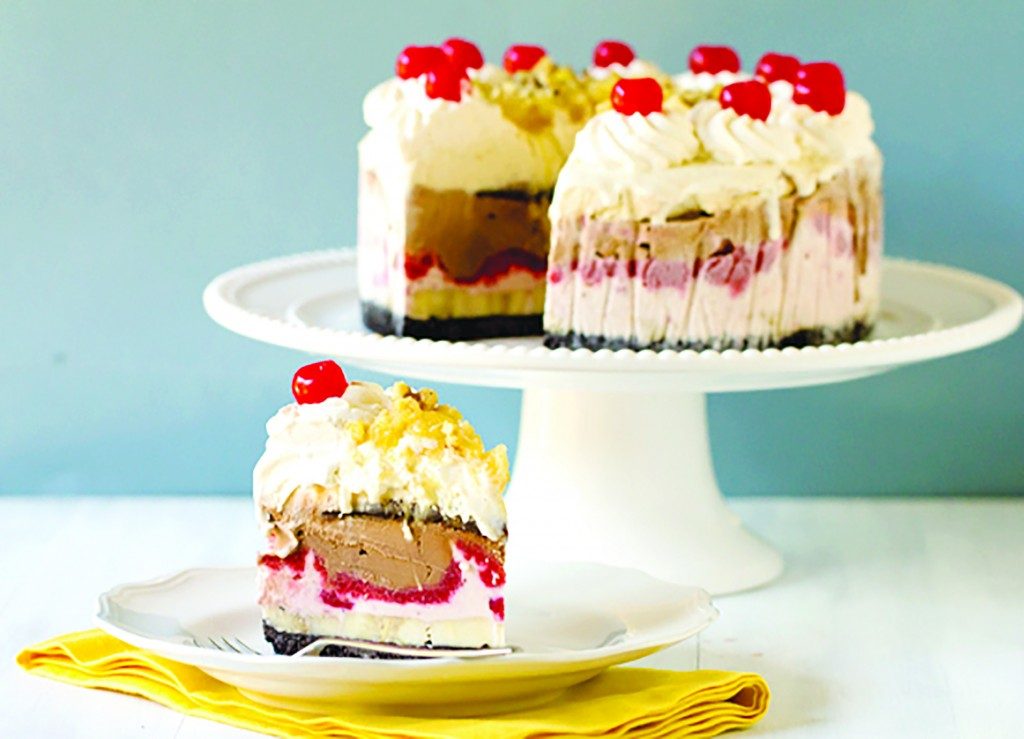 A banana split is a classic ice cream dessert. A banana is cut in half lengthwise — hence the name — and placed in a long dish. There are many variations, but the classic banana split is made with scoops of vanilla, chocolate and strawberry ice cream. Pineapple chunks, strawberries and chocolate sauce are spooned over the ice cream and it is garnished with crushed nuts, whipped cream and maraschino cherries.

It is believed that David Strickler, a 23-year-old assistant pharmacist who enjoyed creating ice cream sundaes at the store’s soda fountain, invented the banana-based triple ice cream sundae in 1904.

And even though its price of 10 cents was twice the price of other ice cream treats, it caught on with local college students.

The 100th anniversary of the invention of the banana split was celebrated in 2004 and August 25 was designated as the official day to celebrate this popular dessert.

The Walgreens pharmacy chain is credited with spreading the popularity of the banana split. The early drug stores operated by Charles Rudolph Walgreen in the Chicago area adopted the banana split as a signature dessert. Ice cream fountains in the stores attracted customers who enjoyed ice cream treats while waiting for their prescriptions to be filled.

Over the years, lots of different versions have been invented and turned into cakes, pies and layered frozen desserts. Try our version for a simple summer dessert that’s sure to impress.

For the ice cream:

For the whipped cream:

Spray an 8- or 9-inch springform pan with nonstick cooking spray. Line the bottom and sides with parchment paper; set aside.

Combine the cookie crumbs with the melted butter, tossing until all the crumbs are evenly moistened. Press into an even layer in the bottom of the prepared pan. Top with the banana slices. Place the pan in the freezer for at least 15 minutes.

Spread the strawberry ice cream over the bananas. Top with the puréed strawberries. Place the pan back in the freezer for at least 30 minutes.

Use an offset spatula to spread the chocolate ice cream into a smooth, even layer. Pour the chocolate sauce over the ice cream. Return to the freezer for at least 1 hour, or until completely frozen.

Use an offset spatula to spread the vanilla ice cream into a smooth, even layer. Cover with plastic wrap, return the assembled cake to the freezer and freeze overnight.

Combine the heavy cream, sugar and vanilla extract in the bowl of a stand mixer. Using the whisk attachment, whip on medium-high speed until the cream is light and fluffy and holds a medium to firm peak, 2 to 3 minutes.

Unmold the ice cream cake and place on a platter. Pipe the whipped cream into rosettes around the outer edge of the cake. Top each rosette with a maraschino cherry. Fill in the space in the middle with the crushed pineapple and top with chopped walnuts. Return to the freezer until ready to serve.

Use a hot, dry knife to cut the cleanest slices. Dip your knife in a glass of hot water, wipe it clean with a towel, and cut a slice. Repeat between every slice. Store any leftover ice cream cake in an airtight container in the freezer — but you probably won’t have any left to put away!