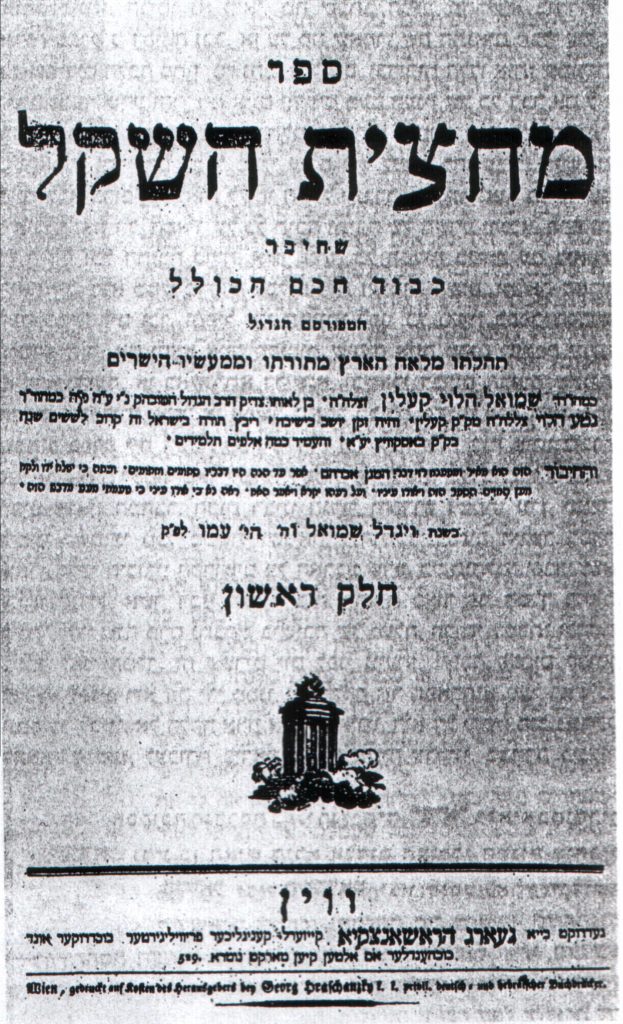 Today is a Yom Tov, as cited in Megillas Ta’anis. Today, the harsh decrees of the Yevanim that forbade Torah study, and the observance of milah and Shabbos was annulled through the wisdom of Rabi Yehuda ben Shamua and his colleagues, who beseeched the authorities night after night until the decree was cancelled.

In 5284/1524, the wicked ruler of Egypt, Achmed Pacha, decreed the extermination of the entire Jewish community but, miraculously, he was killed. In commemoration of the great miracle, this day was observed annually as “Purim of Cairo.”

The Machtzis Hashekel, Harav Shmuel Kelen of Boskowitz, zt”l, was born in 5484/1724 to Harav Nosson Nota, zt”l, who descended from an esteemed lineage. On his mother’s side he was a descendant of the Avodas Hageirshuni and the Maharal of Prague.

From his early youth he learned with great diligence, as his son attests, “He did not walk four cubits without Torah, from morning to evening; even during the night he would not rest, rather he stayed up and learned.”

Rav Shmuel spread Torah in his great yeshivah in the city of Boskowitz, one of the most important communities in Moravia. He despised Rabbanus and throughout his lifetime vehemently refused to accept prominent positions that were offered to him, humbly claiming that he was not worthy. Likewise, he refused to allow his children to serve as Rabbanim until his son, Harav Binyamin, zt”l, had absolutely no other source of income, at which time he accepted the Rabbanus in Boskowitz.

His son writes about his father’s piety and koach hatefillah, remarking that people from far and wide would flock to his doors so he could daven for them.

His renowned chibur, Machatzis Hashekel, is a peirush on Magen Avraham, Orach Chaim. The Magen Avaraham’s writing was difficult due to its brevity; the Machatzis Hashekel unlocks its complexity with his broad explanations.

In addition, he authored a number of other lesser-known works with the title Machatzis Hashekel: a peirush on the Shach in Yoreh Deah; a peirush on Maseches Bava Basra; on Hilchos Gittin, Kiddushin, Niddah, Melichah, Basar v’Chalav, Shechitah and Taaroves.

Before his petirah he asked that a simple matzeivah be erected on his gravesite. People, however, did not heed this request and built an elaborate one. That same night the matzeivah cracked, and they immediately changed it, lekayem retzon tzaddik.

In 1933, in German parliamentary elections, the Nazi Party won 44 percent of the vote; the Nazis joined with a conservative nationalist party to gain a slender majority in the Reichstag.

In 1946, Winston Churchill delivered his speech at Westminster College in Fulton, Missouri, in which he said: “From Stettin in the Baltic, to Trieste in the Adriatic, an ‘iron curtain’ has descended across the continent, allowing police governments to rule Eastern Europe.”

In 1970, the Treaty on the Non-Proliferation of Nuclear Weapons went into effect after 43 nations ratified it.

In 1998, NASA scientists said enough water was frozen in the loose soil of the moon to support a lunar base and perhaps, one day, a human colony.

In 2002, President George W. Bush slapped punishing tariffs of eight to 30 percent on several types of imported steel in an effort to aid the ailing U.S. steel industry.