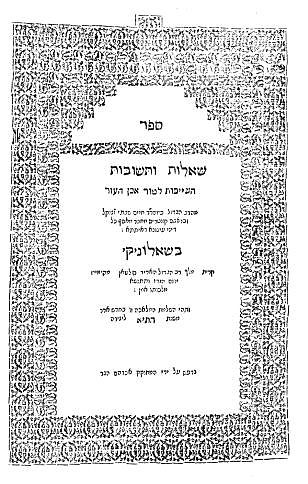 In 3411/, the last prophecy of the last Navi, Zecharia, was that the Jews should not mourn on Tishah B’Av during the era of the second Beis Hamikdash. 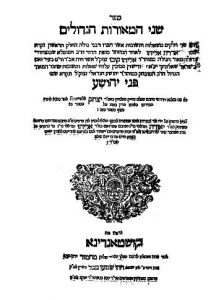 Harav Eliyahu Kubo was born about 5388/1628. His father Harav Yehudah, Hy”d, was killed al kiddush Hashem in Salonika less than 10 years later, on Shabbos, 15 Elul 5397/1637, after fighting a decree of the government.

The Kubo family was well known among Salonika Jewry for disseminating Torah in the city for many hundreds of years. The family emigrated from Spain to Greece during Geirush Sfarad, the expulsion of Jews from Spain. They were called “Kubo” after the city in northern Spain where they originated.

Rav Eliyahu married the daughter of Harav Moshe ben Rav Chaim Shabsi, the Maharchash, zt”l. The Maharchash had become Chief Rabbi in Salonika in 5443/1683; during his tenure as Rav, many hundreds unfortunately converted to Islam together with Shabsai Tzvi.

After the petirah of his father-in-law, the Maharchash, Rav Eliyahu was appointed Rav of Salonika and Rosh Yeshivah of the local yeshivah gedolah. He taught hundreds of talmidim, notably Harav Tzvi Ashkenazi, the Chacham Tzvi, zt”l, and Harav Shmuel Yitzchak Modielano, zt”l.

Rav Eliyahu suffered much in his lifetime. Two of his sons were niftar in an epidemic in 5444/1683; a third son, Rav Yehudah, was niftar the same year that he was.

His daughter was married to Harav Yehoshua Chandali.

In 1859, militant abolitionist John Brown was hanged for his raid on Harpers Ferry the previous October.

In 1942, an artificially created, self-sustaining nuclear chain reaction was demonstrated for the first time at the University of Chicago.

In 1954, the U.S. Senate passed, 67-22, a resolution condemning Sen. Joseph R. McCarthy (R-Wis.), saying he had “acted contrary to senatorial ethics and tended to bring the Senate into dishonor and disrepute.”

In 1969, the Boeing 747 jumbo jet got its first public preview as 191 people, most of them reporters and photographers, flew from Seattle to New York City.

In 1970, the newly created Environmental Protection Agency opened its doors.