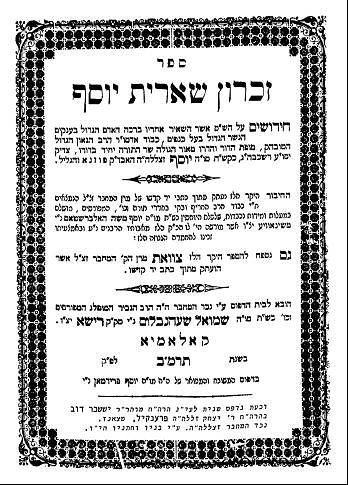 Harav Yosef of Posen was born in Zolkova in 5496/1736. His father, Harav Moshe Pinchas, was Rav in Sevirse, near Lvov, and later in Zolkova. His mother, Rebbetzin Rivkah, was the daughter of Rav Yisrael Isserl, son-in-law of the Maharsha.

When Rav Yosef became bar mitzvah, Harav Yechezkel Landau, the Noda BiYehudah, chose him as a chassan for his oldest daughter, Freyda. After the wedding Rav Yosef remained in his hometown, Zolkova, near his father who provided support so as to enable him to become great in Torah. Later, Rav Yosef moved to be near his esteemed father-in-law, first in Yampola and then in Prague.

Although young, Rav Yosef was recognized as a leading talmid chacham and asked to become Rav in Viktov. He was later Rav in the kehillos of Skohl, Yavrov and finally Posen.

Rav Yosef was appointed Rav in Posen in 5540/1780, and remained there until his petirah. He founded a yeshivah gedolah there.

His anivus was outstanding. It is related that every day, while his room was full of people who had come with their questions to the Rav, his Rebbetzin would come in and scoff at him, telling all the people that her husband was not a talmid chacham at all. Rav Yosef would sit there silently and ignore her ranting, never getting upset or disturbed by her outbursts. The people could not understand this: How could she denigrate and humiliate her great husband?

It was only after his petirah on 5 Adar 5561/1801 that the reason finally emerged. While Rav Yosef’s mittah was still on the ground, his Rebbetzin came over with tears on her cheeks and cried out, “Reb Yosef, be grateful to me for carrying out your instructions to embarrass you in public! It was your explicit condition before our wedding that I should treat you with disrespect. You were worried that you might fall into arrogance, and therefore forced me to carry out my part in the deal. Who knows better than I your real tzidkus and greatness in Torah?”

As she finished speaking, as if to show his consent and give his agreement to her words, a wondrous thing occurred — Rav Yosef was seen nodding his head in agreement to the truth of her words.

In 1922, Sultan Fuad I proclaimed himself the first king of modern Egypt.

In 1985, the first internet domain name, symbolics.com, was registered by the Symbolics Computer Corp. of Massachusetts.

In 1996, the Liggett Group agreed to repay more than $10 million in Medicaid bills for treatment of smokers, settling lawsuits with five states.