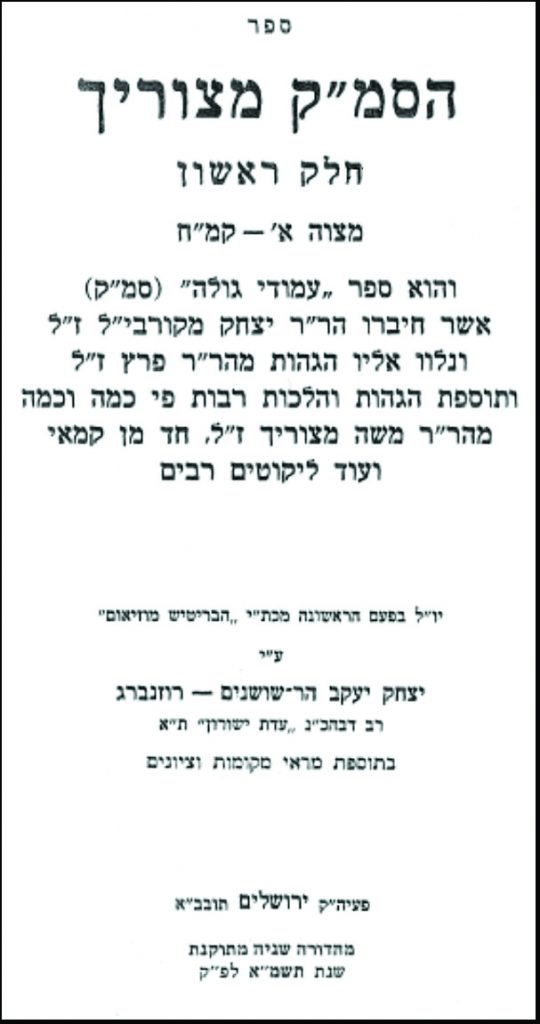 Rambam observed this day as a personal Yom Tov in honor of his discovery of Ezra Hasofer’s sefer Torah.

In 5677/1917, the Turkish government that ruled Palestine at that time authorized the return of the Jews who had been expelled from Yaffo and Tel Aviv.

In 5727/1967, the Old City of Yerushalayim was recaptured during what is known as the Six-Day War, and the Kosel once again became accessible.

He also learned under Rabbeinu Shmuel of Aubra, one of the French Baalei Tosafos and a close associate of Rabbeinu Peretz and Rabbeinu Yonah of Girondi.

Rabbeinu Yitzchak is best known for his work Sefer Mitzvos Katan, also known by its acronym SeMaK, a compilation and concise listing of the 613 mitzvos. It is based on the concept of the Sefer Mitzvos Gadol, SeMaG, of Rabbeinu Moshe of Coucy, but does not delve into the discussions behind the decisions.

The sefer is divided into seven “pillars” for the days of the week, which he calls Amudei Golah. In it he explains which mitzvos are applicable in these days, hence the name Golah (meaning applicable even in galus).

He dispatched the Sefer Mitzvos Katan at his own expense to Jewish communities in Western Europe so that they might copy its contents as a record of the mitzvos they were obligated to fulfill.

Many of the Rishonim, and later the Acharonim, wrote notes on the SeMak.

In 1775, John Hancock was unanimously elected President of the Continental Congress in Philadelphia, succeeding Peyton Randolph.

In 1844, Samuel F.B. Morse transmitted the message “What hath G-d wrought” from Washington to Baltimore, as he formally opened America’s first telegraph line.

In 1937, in a set of rulings, the U.S. Supreme Court upheld the constitutionality of the Social Security Act of 1935.