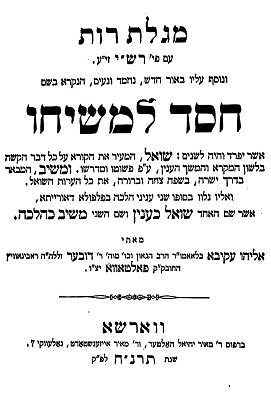 In 2449, Bnei Yisrael paused at Marah after crossing the Yam Suf. The Gemara in Sanhedrin 56b relates: “In Marah, Hashem commanded the Jews to observe 10 mitzvos: the seven Mitzvos Bnei Noach, plus monetary laws, Shabbos, and kibbud av va’eim.”

In 3412, Daniel saw a vision. The passuk says (Daniel 10:5-12): “On the shore of the Chiddekel River, a man clothed in linen … his face like the appearance of lighting, his eyes like flaming torches … was revealed to Daniel. [According to most meforshim, the man was Gavriel.] And the people (Chaggai, Zecharia and Malachi) did not see him … And the man comforted him: ‘Do not fear, Daniel, for from the first day that you set your heart to understand and to fast before your G-d, your words have been heard.’” (See meforshim there for further explanation.)

Harav Eliyahu Akiva Rabinowitz was born in 5621/1861. He was the son of Harav Dov, zt”l, Rav of Schillel and Pontnitza. As a young boy, Eliyahu Akiva was known as the iluy of Wackshne.

He was the brother-in-law of Harav Eliyahu Dovid Rabinowitz Teumim, zt”l, the Aderes, Rav of Poltava.

Known for his firm opinions and blessed with eloquence, Rav Eliyahu Akiva fought those who tried to undermine the Torah-true way of life. Fierce and unafraid, he was always ready to defend the kodshei Yisrael that were under constant attack.

At the deathbed request of his father (with the din of a shechiv mera), Rav Eliyahu Akiva refrained from entering into personal arguments defending his positions; anyone who wanted to know his opinion could read it in his articles in the press.

Rav Eliyahu Akiva was the editor of Hapeles for five years, as well as founding editor of Hamodia. In both positions he worked with a clear vision of what European Jewry at the time was facing and addressed the issues with vigor and courage.

On Erev Pesach 5677/1917, during matzah-baking, Rav Eliyahu Akiva collapsed. He was niftar a week later, on 24 Nisan.

Of his many writings, Chesed Lemishicho on Megillas Rus was printed as a sefer.

In 1867, by a single vote, the United States Senate ratified a treaty with Russia for the purchase of Alaska.

In 1983, the space shuttle Challenger ended its first mission with a safe landing at Edwards Air Force Base in California.