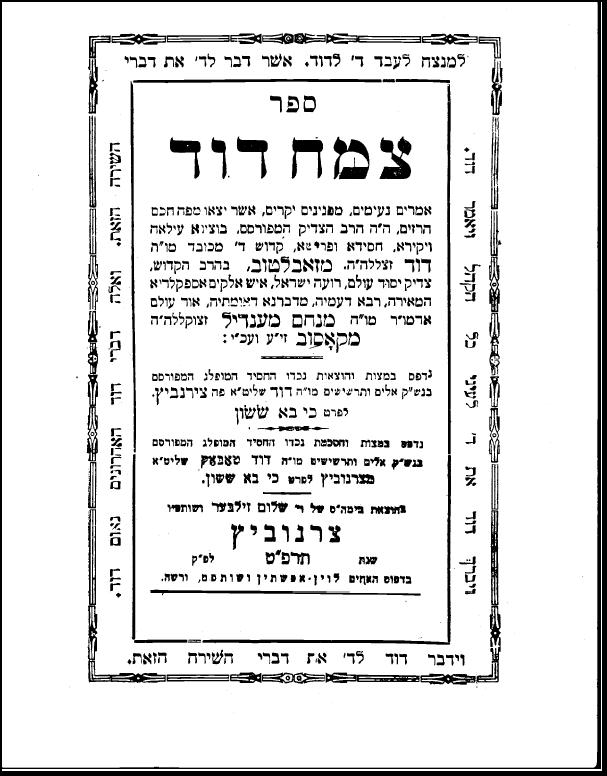 In 5694/1934, German President Paul von Hindenburg died, paving the way for a complete takeover by Adolf Hitler, ym”s, when the Reichstag appointed him head of state and commander-in-chief of the German armed forces.

In 5702/1942, the first train carrying Jews was deported from Belgium to Auschwitz.

The German SS murdered 2,750 Jews of Lancut, Poland, in the Falkinia Forest. Hy”d.

5717/1957, Harav Aharon Rokeach, zt”l. He became the Admor of Belz in 1927, with a following of thousands. He lost his sons in the Holocaust, but escaped the Nazis through great miracles. In 1944 he re-established his court in Tel Aviv, where Belzer Chassidus flourished once again. His chiddushei Torah are saved in the sefer Mahara.

Harav Dovid Hager, born in 5557/1797, was the son of Reb Menachem Mendel of Kossov, founder of the Viznitz dynasty and mechaber of Ahavas Shalom.

Reb Dovid was taken as a chassan by Reb Moshe Leib of Sassov, marrying his daughter Pessia Leah.

After the petirah of his father on 17 Cheshvan 5586/1825, Reb Dovid succeeded him as Rebbe in Zablatov. He was also named Rav of the city.

Reb Dovid was renowned for his intense avodas Hashem, dedicating all his time to Torah and tefillah.

He was close with all the leading Rebbes of his time and discussed important issues with them. He was known for straight and profound thinking; Reb Yisrael of Ruzhin called him “the wisest man on earth.”

Reb Dovid was especially close with Reb Meir of Premishlan. Once, when Reb Dovid visited Reb Meir, the latter sent all the Chassidim who had traveled to his court to ask for a brachah from Reb Dovid, explaining that Reb Dovid’s brachos had a special zechus because of his forefathers and they would come true.

His sons were Reb Yaakov, who succeeded his father as Rebbe in Zablatov; Reb Tzvi Hirsh of Pichinzen; Reb Menachem Mendel of Damitsch; Reb Yechiel Michel of Strozhnitz; and Reb Alter, who was niftar in his youth.

In 1916, President Woodrow Wilson signed an act establishing the National Park Service within the Department of the Interior.