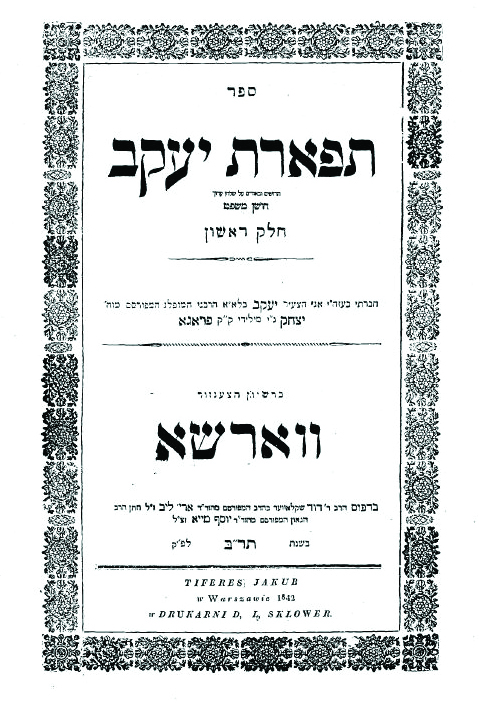 In 5455/1695, Jews of New York petition the governor for permission to exercise their religion in public. Permission was denied, because freedom of religion applied to Christians only.

Harav Yaakov Gesundheit was born in Kislev 5576/1815. His father was Harav Yitzchak, based in Praga.

As a young child, his great potential was evident. At the age of just 10, he was already seen as a budding talmid chacham.

From the age of 13 till 15, he learned under Harav Aryeh Leib Tzintz, zt”l, who served as Rav of Praga during that period.

When he was all of 16, Rav Yaakov began delivering his own shiurim daily.

It was at this time that Rav Yaakov married. His father-in-law supported the young talmid chacham.

At the age of 18, Rav Yaakov fell ill with a life-threatening illness. With much thanks to Hashem, Rav Yaakov was healed, and, to show his appreciation for the nes, Rav Yaakov took upon himself to publish his chiddushim.

The next year, Rav Yaakov began to write Tiferes Yaakov on Choshen Mishpat, which he published four years later.

In 5618/1858, his talmidim published Tiferes Yaakov on Maseches Gittin, an amazing work on the entire masechta, not missing even one Tosafos without a comment or a chiddush.

He also published other volumes of Tiferes Yaakov on Maseches Chullin and others.

Rav Yaakov was also known for his deep understanding of the Aggados, on which he elaborates when they are mentioned in the Gemara.

Rav Yaakov did not want to benefit from his Torah learning, preferring to support himself by other means, even though many leading kehillos offered him the post of Rav.

It was only after the petirah of Harav Dov Berish Meislish, zt”l, Rav of Warsaw, that he acquiesced, replacing him as Rav of Warsaw. In that capacity, Rav Yaakov enacted many takanos and waged a war against those who tried to uproot traditional Yiddishkeit.

He kept up a halachic correspondence with many of the generation’s other leading Gedolim, among them the Chiddushei Harim of Ger, Harav Avraham of Tchenov and Harav Simchah of Gumbin, zechusam yagein aleinu.

Unfortunately, Rav Yaakov did not serve long as Rav of Warsaw; after only eight years as Rav, he was niftar on 13 Elul 5638/1878.

He was buried in the section of the Warsaw Jewish cemetery designated for Rabbanim, near the entrance.

In 1814, during the War of 1812, British forces invaded Washington, D.C., setting fire to the Capitol (which was still under construction) and the White House, as well as other public buildings.

In 2006, the International Astronomical Union declared that Pluto was no longer a full-fledged planet, redesignating it as a “dwarf planet.”