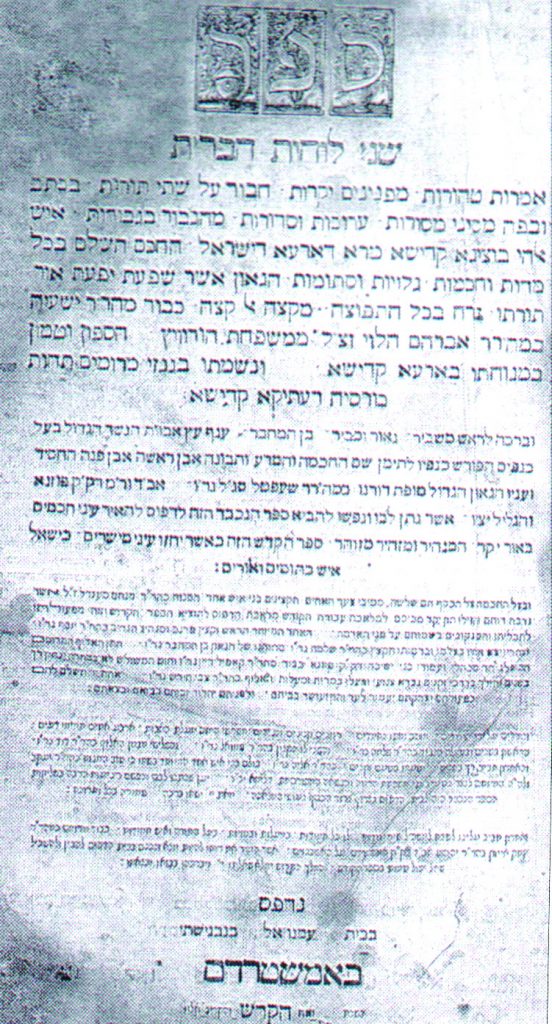 In 5424/1664, a massive gathering of the Vaad Arba Aratzos was held in Lublin. Rabbanim of the four major Eastern Europe countries convened to strengthen vital Yiddishkeit issues.

The Shelah Hakadosh was born in Prague c. 5320/1560. His father, Harav Avraham Halevi, was a Dayan in Prague, Cracow and Lemberg. The illustrious Horowitz dynasty, known for its exceptional yichus, could be traced back to Shmuel Hanavi.

The Shelah Hakadosh married Rebbetzin Chayah, daughter of Rabbi Avraham Moyal, one of the prominent members of the Vienna kehillah.

Over the years, the Shelah was Rav in various communities. In 5366/1606, he took over the rabbanus of Frankfurt, leading this prestigious kehillah and establishing a thriving yeshivah until the Yidden were expelled from the city on 27 Elul 5374/1614. While in Frankfurt, he served as a pillar of the Vaad Arba Aratzos and a member of its governing board. When the Shelah was exiled from Frankfurt together with his flock, he returned to Prague, where he was appointed Dayan in 5375/1615.

His Rebbetzin was niftar on 4 Adar 5380/1620. At that time, the Shelah Hakadosh decided to turn his dream of living in Eretz Yisrael into a reality, so he set sail for Eretz Yisrael.

When he settled in Yerushalayim, he was appointed Chief Rabbi of Eretz Yisrael.

Seeing the depths of the poverty of the settlers in the Holy Land, the Shelah sent messengers throughout the golah, particularly to the communities where he had served as Rav, initiating a tzedakah campaign that he called Yachatz — a Hebrew acronym for the three cities of Yerushalayim, Chevron and Tzfas. Later, he traveled back to Europe to collect money for the destitute Yidden of Eretz Yisrael and spent a Pesach in Constantinople.

The Shelah Hakadosh was niftar on 11 Nisan 5390/1630 and is buried in the old cemetery in Teveria, close to the kever of Rabi Yochanan ben Zakkai. In his will he wrote explicitly that no hespeidim should be said over him.

His holy sefarim, which he completed in Eretz Yisrael, were accepted and beloved by Jews the world over, which is shown by the number of times his great sefer, Shnei Luchos Habris, had to be reprinted. His famous siddur, Shaar Hashamayim, is also world renowned.

In his haskamah, the Bach wrote, “I guarantee that whoever davens from this siddur will have his tefillah accepted.” In addition, the Shelah Hakadosh authored Sheimos Hagittin, Mitzvas Tefillin and Bigdei Yesha.

The Shelah is one of three tzaddikim — the others are the Alshich and the Ohr Hachaim — who are known by the title “Hakadosh.”

In 1788, an expedition led by Gen. Rufus Putnam established a settlement at present-day Marietta, Ohio.

In 1862, Union forces led by Gen. Ulysses S. Grant defeated the Confederates at the Battle of Shiloh in Tennessee.

In 1957, shortly after midnight, the last of New York’s electric trolleys completed its final run from Queens to Manhattan.

In 1984, the Census Bureau reported Los Angeles had overtaken Chicago as the nation’s “second city” in terms of population.