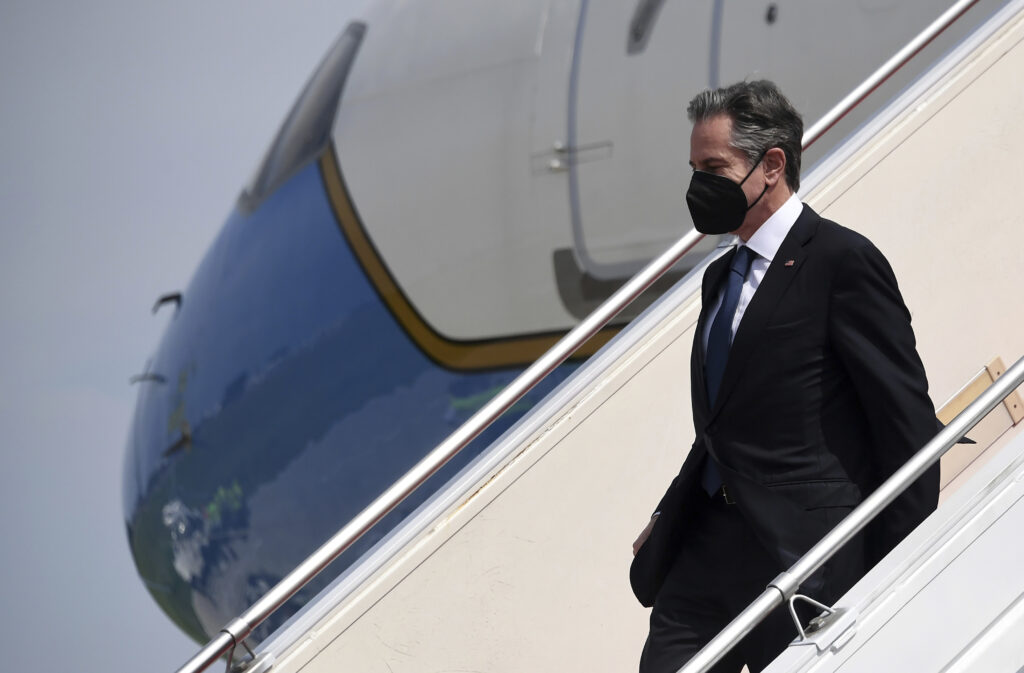 Fresh from delivering a stern new warning to Russia over Ukraine, U.S. Secretary of State Antony Blinken arrived in Indonesia on Monday to find a top aide to Russian President Vladimir Putin already in Jakarta for security talks.

Just a day after joining his Group of Seven foreign minister colleagues in issuing the blunt demand for Russia to step back from a military escalation near the Ukrainian border, Blinken began a 48-hour visit to Indonesia with his plane parking in the shadow of that of Putin’s national security adviser Nikolay Patrushev. Patrushev is considered the third most senior official in Russia’s government.

Shortly before Blinken landed, the Russian Embassy in Jakarta announced Patrushev’s visit, saying he would be in the Indonesian capital for the same two days as the top American diplomat. The timing means that Patrushev’s meetings will coincide with a major speech Blinken plans to give Tuesday on the Biden administration’s Indo-Pacific strategy.

There was no indication that the two men might meet in Jakarta. Nor was there any indication that either would acknowledge the other’s presence in Indonesia, which is the headquarters of the Association of Southeast Asian Nations and a key regional security player.

Blinken was meeting Monday afternoon with Indonesian President Joko Widodo before a full slate of events on Tuesday, including the speech. The Russian Embassy said Patrushev’s main interlocutor in Indonesia would be Law and Security Affairs Minister Mohammad Mahfud.

Blinken traveled to Jakarta from a Group of Seven foreign ministers meeting in Liverpool, England, at which he and his counterparts told Russia on Sunday to “de-escalate” its military buildup near the Ukrainian border.

The G7 called on Russia to “de-escalate, pursue diplomatic channels, and abide by its international commitments on transparency of military activities,” and praised Ukraine’s “restraint.”

The ministers warned in a joint statement that any “use of force to change borders is strictly prohibited under international law. Russia should be in no doubt that further military aggression against Ukraine would have massive consequences and severe cost in response.”

The statement came after President Joe Biden spoke to Putin in a video call last week and said he had made clear that a Russian invasion of Ukraine would have “devastating” consequences for Russia’s economy.

Moscow denies having any plans to attack Ukraine and accuses Kyiv of its own allegedly aggressive designs.

Ahead of Blinken’s current trip, which at eight days will be his longest overseas journey since taking office, State Department officials had said they expected his focus to shift from challenges posed by Russia to those posed by China as he moved from the G7 meeting in Liverpool across the globe to Southeast Asia.

It was not immediately clear if Patrushev’s presence on Indonesia would change that. In Indonesia, Malaysia and Thailand, Blinken is aiming to highlight the importance of ensuring freedom of navigation in the South China Sea, on which many of China’s neighbors have accused Beijing of encroaching.

Blinken also plans to express deep U.S. concerns about developments in Myanmar, where a military junta took power shortly after the Biden administration took office. Last week, a court in Myanmar convicted democracy leader Aung San Suu Kyi, who was ousted in a de facto coup in February, on two charges. The proceedings were widely criticized as a further effort by the country’s military rulers to roll back the democratic gains of recent years.

As Blinken visits Kuala Lumpur and Bangkok, Patrushev will be in Phnom Penh, Cambodia. One of Blinken’s most senior aides, State Department counselor Derek Chollet, was in Cambodia last week following the U.S. imposition of an arms embargo on the country, citing deepening Chinese military influence, corruption and human rights abuses.