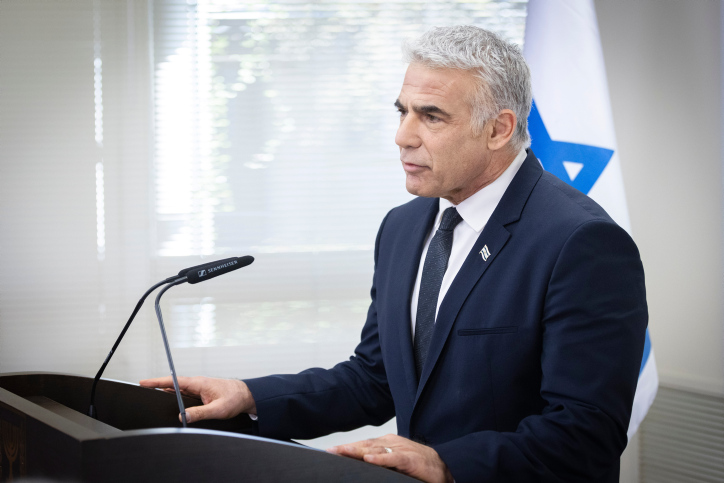 Foreign Minister Yair Lapid said on Monday that the government will revise the building plan for the Atarot area that won’t lead to a diplomatic crisis.

“The government of Israel will determine its policy on the construction of Atarot,” Lapid told a meeting of his Yesh Atid party. “We will make sure that it does not turn into a confrontation with the American government.”

Lapid promised that the issue will be resolved internally within the coalition government.

The Yerushalayim District Planning and Building Committee decided earlier in the day to delay the continuation of the construction plan in the Atarot neighborhood for the time being.

The committee determined that an environmental impact survey should be prepared regarding the plan.

The plan to build 9,000 housing units on the grounds of the disused Atarot airport had sparked concern from the international community, including the United States. The planned neighborhood, intended for chareidi residents, would be built against the security fence.

On the other side of the concrete wall lies the East Yerushalayim neighborhood of Kafr Aqab and the Qalandiya refugee camp. According to the plan, construction less than 50 meters from the wall will be banned, officials said.

During the hearing, Israeli officials observed that the new neighborhood was close to the Atarot industrial one, whose factories could reduce the quality of life for residents.

Critics of the plan said such a housing project would serve as an obstacle for a two-state solution, as it would seriously impede a contiguous Palestinian swath of neighborhoods in East Yerushalayim.

After American pressure last week, Israel indicated it would walk back the plan, but the U.S. was dismayed to see that it nevertheless remained on the docket for Monday’s meeting of the District Planning Committee.

Regional Cooperation Minister Issawi Frej (Meretz) appeared before the committee to argue against the construction of the neighborhood, despite the fact that Interior Minister Ayelet Shaked made it clear to the committee that he did not represent the government and its views on the matter. Instead he argued for the reopening of the historic Atarot airport.

District Planning Committee member Ofer Berkowitz called on the committee to approve the plan. “This is a historic and very important plan for resolving the housing crisis in Yerushalayim. There is no larger land reserve for the construction of ten thousand housing units.

“I welcome its promotion, but I objected to the committee suspending the plan. The plan could have moved forward at the same time as the the environmental survey, and not delayed. I sincerely hope that the government does not use the environmental issue as an excuse,” Berkowitz said.