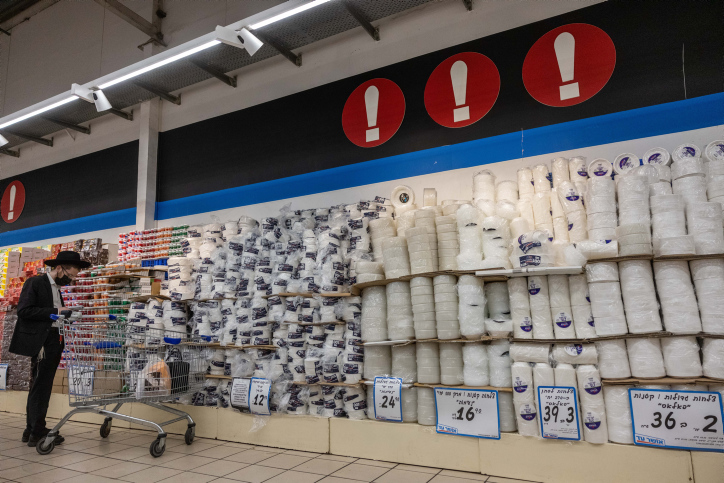 The new tax on disposable plastic utensils has been in effect for almost a month, and the Knesset Finance Committee on Wednesday heard complaints about it not just from chareidim but from manufacturers and restaurant owners as well, The Jerusalem Post reported.

While there is no doubt that the tax is effective in reducing the use of plastics—retailers say that sales of the products have fallen as much as 50%—problems have arisen with the fairness and practicality of its application.

The law, backed by Finance Minister Avigdor Liberman, was passed with little discussion, and now the Knesset has decided to conduct a review of the measure.

Tomer Moore, CEO of Strong Restaurateurs Together, told the committee that paper cups containing plastic should not be subject to the tax. As of now, the tax applies to paper cups with a plastic content of 5% or more.

“This law is going to be a direct hit to our pocket,” he said. “We seek to exclude paper cups from this law, or at least reduce the taxation on them to a minimum. Takeaway food is a significant revenue source for small places. On average, there are a million consumers a day who buy takeaway coffee in paper cups that are 100% biodegradable, with 5% plastic in them. This hurts our pockets directly,” the Post quoted him as saying.

Moore predicted that the tax, if not lifted, would raise the cost of a cup of coffee by about 8% for restaurants and cafes.

Manufacturers have requested longer payment terms to pay the taxes as they adjust to the new requirements. Others have complained at the seemingly arbitrary manner in which the tax is applied to products of different levels of thickness or plastic coating.

Manufacturer Amos Shaked pointed out that trucks carrying disposable products from the Palestinian Authority, where the tax has not been imposed, have been making more frequent deliveries in the past month, providing stores with a way to bypass the tax.

The tax is levied directly on the manufacturers, who then pass the extra cost on to retailers and consumers.

Chareidi politicians have denounced the measure from the outset as discriminating against their constituents, as the chareidi community uses plasticware at a higher rate than the rest of society.

Israelis are known to be among the biggest consumers of disposable plastics in the world. They throw away about 70,000 tons of plastics each year, and spend NIS 2 billion on such items, according to the Environmental Protection Ministry.

Committee chairman MK Alex Kushnir (Yisrael Beytenu) concluded the meeting with a request to investigate the issues before the next meeting.