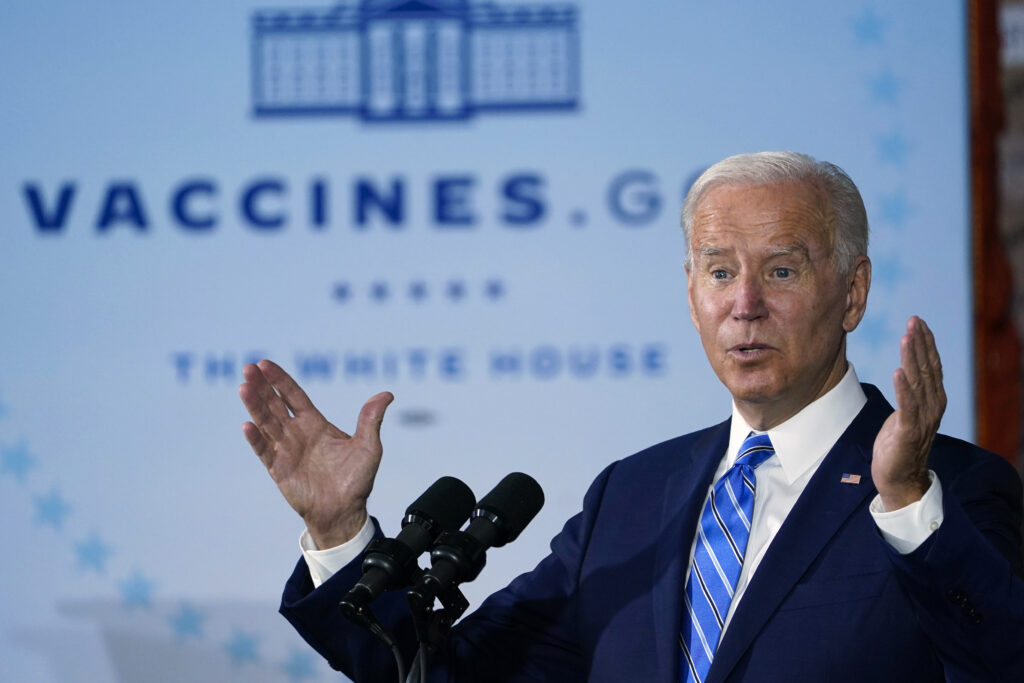 Challenges to President Joe Biden’s COVID-19 vaccine mandate for private employers will be consolidated in the U.S. 6th Circuit Court of Appeals, a panel dominated by judges appointed by Republicans.

The Cincinnati-based court was selected Tuesday in a random drawing using ping-pong balls, a process employed when challenges to certain federal agency actions are filed in multiple courts.

The selection could be good news for those challenging the administration’s vaccine requirement, which includes officials in 27 Republican-led states, employers and several conservative and business organizations. They argue the U.S. Occupational Safety and Health Administration does not have the authority to impose the mandate.

The challenges, along with some from unions that said the vaccine mandate didn’t go far enough, were made this month in 12 circuit courts. Under an arcane system, it was up to the clerk of the Judicial Panel on Multidistrict litigation to select a ping-pong ball from a bin to choose where the cases would be heard.

It was a favorable outcome for Republicans. Eleven of the 16 full-time judges in the 6th Circuit were appointed by Republican presidents.

Another court where a majority of judges were nominated by Republicans, the New Orleans-based 5th Circuit Court of Appeals, issued a ruling that put the mandate on hold.

Trump’s appointees flipped the 11th Circuit in the South to Republican control and expanded the GOP-appointed majorities in the 5th, 6th and 8th Circuits in the Midwest and South. Biden’s three appointees switched the New York-based 2nd Circuit to Democratic control.

In all, 34 objections have been filed in all 11 regional circuits plus the one for the District of Columbia. That’s where the ping-pong balls came in to play.

Under federal law, cases challenging federal agency actions get consolidated upon the agency’s request if they are filed in multiple circuit courts. Each circuit where a challenge is filed within the first 10 days of the agency taking action has an equal chance of being selected.

It was up to the judicial panel’s clerk, John W. Nichols, to select a ping-pong ball from a bin, according to a Tuesday court filing by the panel. The office denied a request by The Associated Press to allow media access to the drawing.

The employer vaccine mandate calls for businesses with more than 100 workers to require employees to be vaccinated by Jan. 4 or wear masks and be tested weekly for COVID-19. Exemptions are provided for religious reasons and for those who work at home or only outdoors.

Because it’s an unusual rule from the workplace safety agency, there is no consensus among lawyers on how the challenges will go. OSHA has issued just 10 emergency rules in the half century since it was formed. Of the six challenged in court, only one survived intact.

The Biden administration has insisted it’s on strong legal footing. It also has the backing of the American Medical Association, which filed papers in support of the mandate.

Among those challenging the rule is a consortium of construction contractors. They say they want their workers vaccinated, but that a requirement only on larger companies is just pushing vaccine-hesitant workers to take jobs with companies that have fewer than 100 employees.

A three-judge panel of the 5th Circuit extended the stay of the OSHA rule in an opinion released last Friday, expressing skepticism that the agency had authority to implement the vaccine requirement. The 6th Circuit could modify, revoke or extend the stay.

It had not yet been determined which judges from the 6th Circuit will be on a three-judge panel to hear the case or whether it will be considered by all the judges.