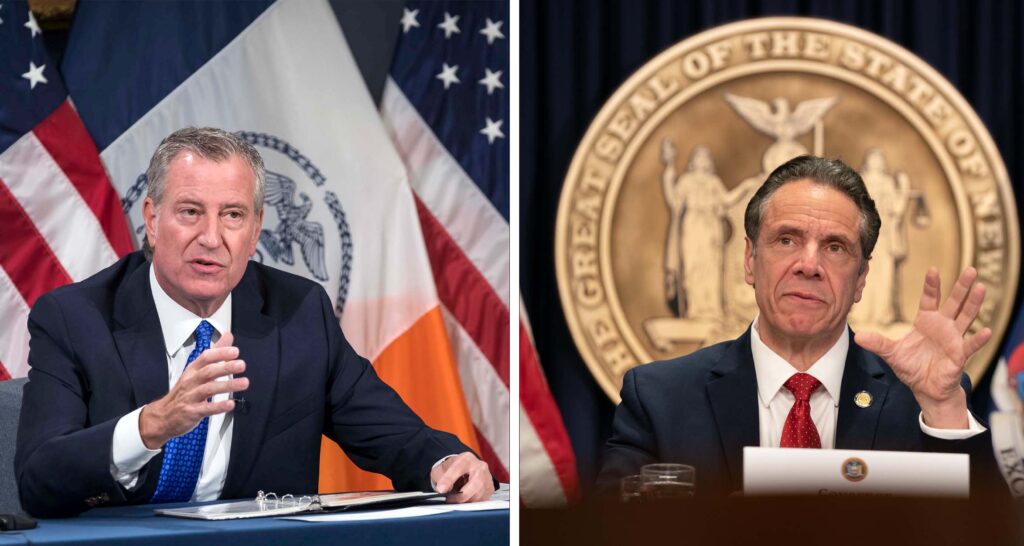 New York City Mayor Bill de Blasio said he was “confused and confounded by the zones the state created” during last fall’s COVID-19 shutdown, and said the administration of former Gov. Andrew Cuomo froze city officials out of management of the outbreak.

Long-running clashes between de Blasio and Cuomo have been brought to the fore again after state Attorney General Letitia James last week released transcripts of interviews conducted in the spring related to various investigations of Cuomo, who resigned in August. In one of the interviews, a former official at the state Health Department decried what she described as the state’s Executive Chamber excessively controlling state Health officials, and not allowing them to work with their counterparts in New York City.

“We were not allowed to collaborate with our peers in the local health departments and New York City Department of Mental Health and Hygiene, which is a critical component in an outbreak response, to collaborate with different facets of public health. They actually implemented it and we do not,” Dr. Elizabeth Dufort, former medical director of the state Health Department’s epidemiology division, who was identified in the interview transcript as State Entity Employee #2, told investigators. “Not being able to collaborate with them in the way we normally would really hindered our ability to perform our jobs, we felt. And collaborate with other associations, organizations and community based or statewide associations or organizations. That would be normal during an outbreak response, or certainly during a pandemic.”

Dufort also said that state Health officials “were advised that we couldn’t really have our routine unofficial meeting” with city officials, and that “the official meeting, everything had to be approved in advance. So it took so long to get things approved it made them very challenging to even logistically organize.” Dufort said that when this directive was give to state Health employees, “they implied it came from the Chamber.”

In response to rising COVID-19 infection rates in parts of the city last fall, the de Blasio Administration released daily rolling averages of COVID-test positivity rates by zip code. But when Cuomo enacted a partial shutdown on October 6, 2020, he used color-coded “cluster zones” rather than zip code, and the city stopped releasing the zip code data.

Elected officials representing these communities were infuriated that the city stopped releasing zip code data, because several weeks after the shutdown, they believed their areas were improving and should no longer be subjected to restrictioms – but without the data, there was no way to prove it.

Many of the neighborhoods in the most restrictive zones had high populations of Orthodox Jews, who felt the governor was targeting them by, instead of using a zip-code approach, drawing boundaries around their neighborhoods specifically. These communities felt vindicated when the Dufort transcript was released last week, in which she said, “There were metrics that our staff would work on, but they would only be announced that people met the metrics if that came from the Chamber. Some areas met the metrics and would be called a zone and others met the metrics and would not be called a zone.”

At his daily press conference Wednesday, de Blasio was asked by a Hamodia reporter about allegations of Cuomo’s banning state–city collaboration, and the zone- rather than zip-code-based approach. The mayor replied, “We thought the approach that we were taking was the clearest approach. I was confused and confounded by the zones the state created. They were somehow, you know, self-created geographical units, when we were working from well-recognized geography. And we thought it just made so much more sense to just take what we knew and work from that … Unfortunately, at that point, with that governor, if the city did something, no matter how good or how effective, the state had to do it some different way. So a lot of good work was done down here that got ignored, and the state came up with its own system. And we wanted to avoid even further confusion. So that’s why we did what we did,” in stopping to release zip-code data.

As for the lack of collaboration between city and state health officials, the mayor said, “We knew that people were being told not to talk to us — because we couldn’t get answers from them. That’s how we knew. And that’s just wrong. It was a global pandemic, it was wrong that the professionals were not really allowed to talk to the professionals and get the kind of answers that would protect people’s health.”

A Cuomo spokesperson did not respond to Hamodia’s request for comment.

The relationship between city and state appears to have markedly approved since Cuomo was replaced by former Lt. Gov. Kathy Hochul, “It’s been a wonderful collaboration with the state Health Department over the last few weeks and months,” city health Commissioner Dr. Dave Chokshi said at Wednesday’s press conference. “We’re all in this fight against the virus together. And that’s how we should all be doing our jobs as professionals.”