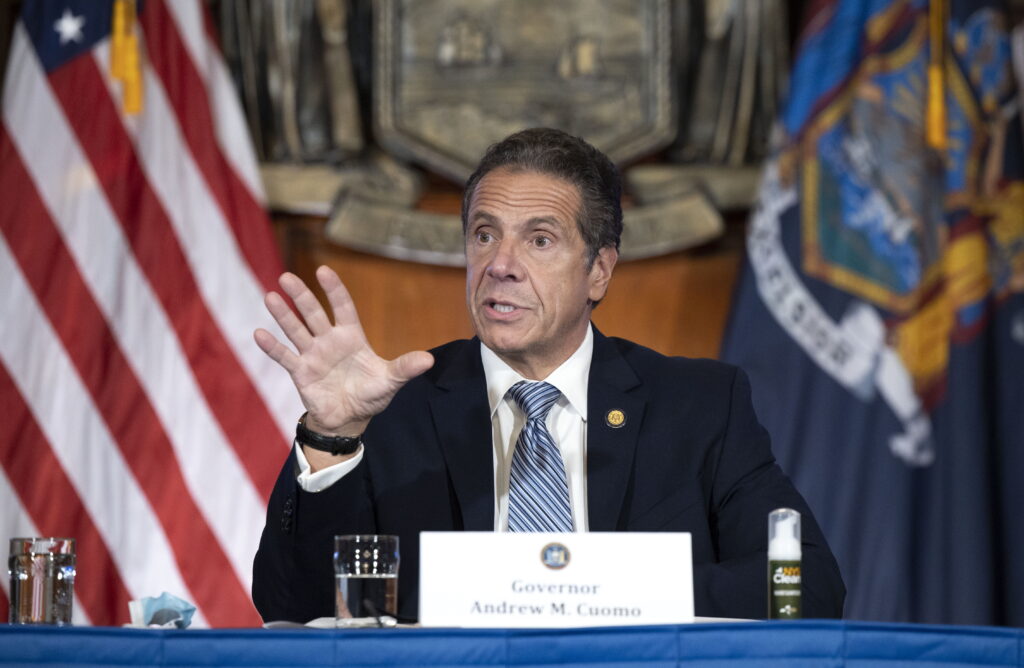 Attorney General Letita James this week released the full transcripts of the interviews by the investigators, who were looking into allegations including Cuomo’s harassment of state employees, his handling of COVID, and his using government staffers to help him work on book about his leadership during COVID. Dufort was identified the interview transcript as State Entity Employee #2.

Jewish activists who had fought the shutdown said the Health official’s statements provide proof of what the activists had alleged since the Cluster Action Initiative was first enacted.

Avi Schick, an attorney at the Troutman Pepper firm, who represented Agudath Israel and local shuls and won an injunction at the U.S. Supreme Court overturning the Initiative, told Hamodia on Thursday that the Health official’s testimony “confirms what we have known all along: the metrics and zones used to target our neighborhoods and shutter our shuls were the product of politics, not science.”

Yossi Gestetner, a co-founder of the Orthodox Jewish Public Affairs Council (OJPAC) who had waged a media battle in defense of the Orthodox community during the shutdown, said, “This is exactly what we argued last year October on an-almost daily basis in media appearances, videos, charts and in social-media posts: The state’s data were clearly showing multiple counties having worse rates than the carved-out zones created by Cuomo’s staffers, but Cuomo kept blaming that wave on Orthodox Jews.”

In response to rising COVID-19 infection rates in some areas last fall, Cuomo instituted his Cluster Action Initiative on October 6, 2020, categorizing parts of the state into various colored “zones” with different levels of gathering limitations, purportedly based on COVID-test-positivity rates.

Just hours before announcing the Initiative, Cuomo held a conference call with rabbis and community leaders, and he indicated that if they kept shuls at 50% of maximum occupancy, further restrictions wouldn’t be necessary. “The current rule is no more than 50%. In any indoor gathering 50% of capacity,” Cuomo told the Jewish leaders. “We have to follow that law. If we don’t follow that law then the infection rate gets worse. Then we’re going to have to go back to closedown. And nobody wants to do that. But I need your help in getting the rate down, and the rate will come down if we follow the rules on the mask and the social distancing and the 50%.”

But Cuomo then shocked the leaders by announcing his Cluster Action Initiative with severe restrictions: In the most-restrictive “red” zone, guidelines included limiting services at houses of worship to 10 people or 25 percent of maximum occupancy, whichever was fewer.

Jewish leaders argued they were being targeted by Cuomo, saying there were no metrics to justify delineation of the various zones that were enacted by the whims of the executive acting with emergency authority.

In an appeal to the Second Circuit Court of Appeals, Agudah alleged, “The evidence shows that [Cuomo] has wielded his total discretion to impose stringent Red and Orange Zone restrictions on predominately Orthodox Jewish communities in Brooklyn, while imposing less-restrictive Orange and Yellow Zones on other areas that carry higher COVID-19 rates but do not have significant Orthodox Jewish populations.”

In an appeal to the U.S. Supreme Court, the Agudah brief argued that Cuomo’s “efforts to whitewash the Cluster Initiative’s discriminatory origins with later-adopted and ever-evolving metrics and inconsistent re-designations demonstrate that the Cluster Initiative is not based upon science or data but on one man’s ever-changing notions: whether those notions are to target a religious minority to tamp down the ‘fears’ of the majority, or to evade this Court’s review for his discriminatory words and actions.”

The Supreme Court ultimately tossed the Cluster Action Initiative following the lawsuit by Agudah and the Brooklyn Catholic Diocese, declaring that the Initiative violated the First Amendment because “essential businesses” were allowed to remain open with fewer limitations than houses of worship.

“Even in a pandemic, the Constitution cannot be put away and forgotten,” read the preliminary-injunction ruling issued minutes before Thanksgiving 2020. “The restrictions at issue here, by effectively barring many from attending religious services, strike at the very heart of the First Amendment’s guarantee of religious liberty.”

Cuomo himself, once lauded for his press conferences and leadership during COVID, and mentioned as a potential presidential candidate, has had a swift and extraordinary fall from grace in recent months.

An order he signed early in the pandemic mandating that nursing homes accept COVID patients from hospitals was blamed for the deaths of thousands nursing-home residents. His administration then was accused of trying to cover up the true number of nursing-home fatalities — a number it released only when publicly called out by Attorney General Letitia James. Cuomo was also criticized for writing a book touting his leadership during the crisis, and accused of using state employees to help work on the book, for which he received a $5 million advance. Finally, facing threat of impeachment after accusations of harassing state employees and others, Cuomo resigned in August, and was replaced by Lt. Gov. Kathy Hochul.

James, who is challenging Hochul and other candidates for the gubernatorial seat in 2022, had appointed special investigators in March to probe the allegations against the governor, and Dufort was interviewed in May, five months after she had resigned. Transcripts from investigators’ interviews were released this week.

The transcript of Dufort’s interview paints a picture of an Executive Chamber that sought to control decisions that might normally be in the purview of the Health Department. For example, in the early days of the pandemic, when only one lab in the state was able to test for the novel coronavirus, the employee heard two colleagues discussing “the data from those test results needing to being routed rather than through the regular system called ECLRS, instead having it go to the Chamber first and delaying putting it into ECLRS where once in ECLRS the results are seen by the local health departments so they can take action or isolation and quarantine. Our state public health people — it was only who is appropriate to see it. By law there are certain permissions and then state and local health and then for the system where it goes to the doctor, of course.”

Dufort told investigators that when a high-ranking official told another employee “that it needed to go first to the Chamber,” the employee said, “No, I can’t do that,” and the official replied, “You can do this or you can quit.” Dufort said she was concerned with the procedure mandating everything go through the executive Chamber because “the labs have to get to the doctors and the local health departments immediately with this disease, it’s very important.”

When the investigator asked Dufort about the relationship between Health Department leadership and the governor’s office, Dufort replied, “As I understood it they were directed by the Chamber to do certain activities and they would then feed that down the chain to staff to implement often.”

“Our staff who worked for hours and hour on these metrics and then nothing would be announced and it was very unclear as to why they would get very frustrated. And for me that was part of my not wanting to be involved in a lawsuit about the metrics without having clarity on how they were established.”

Dufort also said that “we would be trying to get guidance out for schools how to open safely but it would come out after schools opened and feedback would be provided by people who don’t know public health or medicine,” namely “the folks in the Chamber,” such as Cuomo aides “Beth Garvey, [Jim] Malatras, these folks.”

Kalman Yeger, a New York City Councilman who represents former red-zone neighborhoods of Boro Park and Flatbush, told Hamodia on Thursday, “When we said last year that Gov. Cuomo was clearly targeting our community for destruction, we were laughed at and derided as conspiracy theorists. These transcripts prove we were right all along. Gov. Cuomo was deliberately targeting our community. His despicable behavior is now out in public.”

Chaskel Bennett, a co-founder of the Flatbush Jewish Community Coalition, unsuccessfully filed a FOIL request last October to obtain the data the state used to justify the shutdown. Bennett told Hamodia on Thursday, “The revelation by a former Health department official comes as unsurprising confirmation for what we always knew: The Cluster Action Intiative enacted by the Cuomo Administration was in fact arbitrarily designated, and not based on data or science. No matter how much pain was inflicted on families and small businesses, the Governors’s office kept moving the goalposts by creating and then hiding impossible-to-meet metrics. It is both validating and disheartening to finally see this proof of wholesale discrimination and demonization that the Orthodox Jewish community had alleged all along.”

Spokespersons for Cuomo and the state Health Department did not respond to Hamodia’s request for comment on the former Health official’s allegations about Cuomo’s cluster zones.

Below is the Health Department’s letter to Chaskel (Michael) Bennett last October, regarding his FOIL request for data that the state used to enact its Cluster Action Initiative: 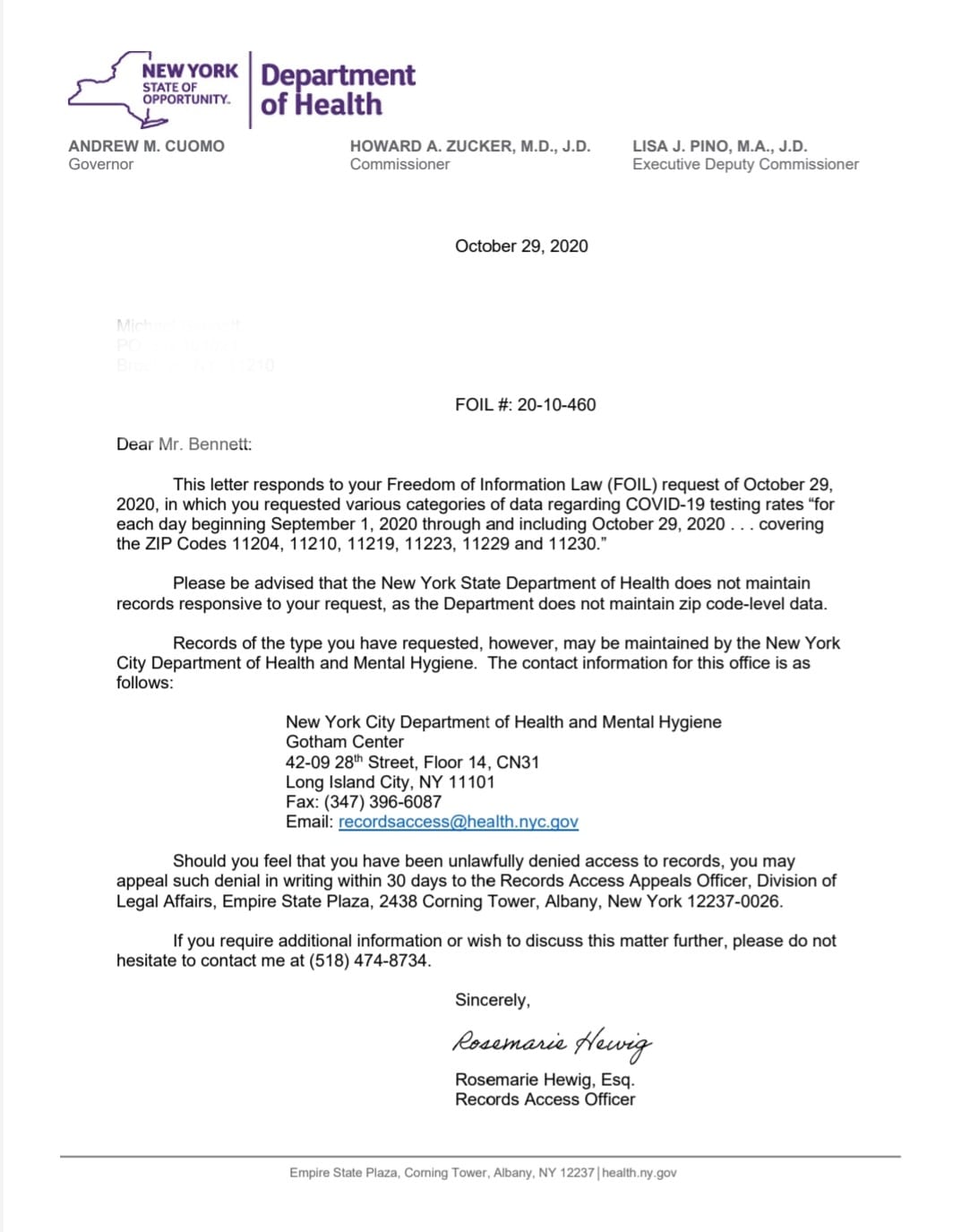