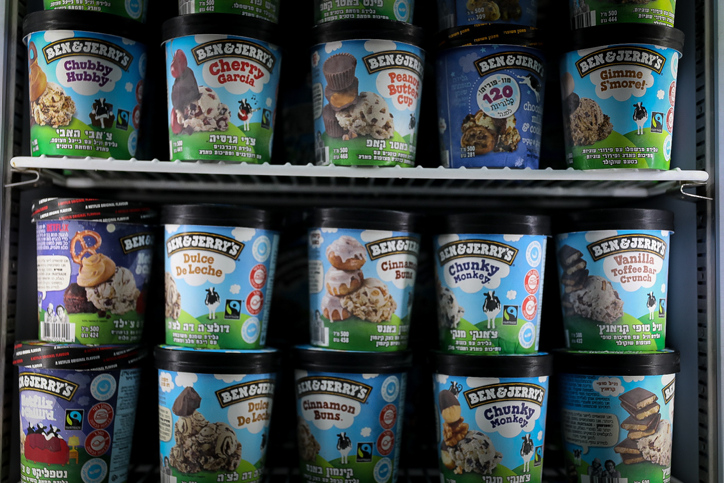 Ben Cohen and Jerry Greenfield, the co-founders of Ben & Jerry’s, dismissed accusations they supported the boycott of Israel following the ice cream maker’s decision to stop selling its products in Yehudah and Shomron in an interview with Axios on HBO Sunday.

“I think [the outrage] is largely based on misinformation. I think Ben and Jerry’s and Unilever are largely being characterized as boycotting Israel, which is not the case at all,” Greenfield said.

Cohen explained, “We were always in favor of the two-state solution, [but] the policy of the Israeli government has been to endorse the settlements in the occupied territories that keep making it harder and harder to actually have a two-state solution.

“I don’t view it as withholding money. We just don’t want our ice cream sold in the occupied territories,” he said.

Asked by Axios reporter Alexi McCammond whether they should move to halt all Israel sales if they disagree with Israeli policies, Cohen retorted, “Well, I disagree with the U.S. government, but we couldn’t stop selling in the U.S. I think it’s fine to be involved with a country or to be a citizen of a country and protest some of the country’s actions.

“We hugely support Israel’s right to exist but we are against a particular policy,” he said.

Cohen, however, was more indignant, saying, “[It was] totally fine because it’s absurd. What, I’m anti-Jewish? I’m a Jew. My family is Jewish. My friends are Jewish.”

Greenfield added that “one thing that’s different [between Israel and other issues] is that what Israel is doing is considered illegal by international law. And so I think that’s a consideration.”

In what appeared to be a decision aimed at singling out Israeli settlements, the U.S.-based ice cream company Ben & Jerry’s announced in July it would no longer be sold beyond the Green Line after 2022. The move drew immediate condemnations from Israelis and a call to boycott the company’s products.

According to the company, whose headquarters are in Vermont, “We have a longstanding partnership with our licensee, who manufactures Ben & Jerry’s ice cream in Israel and distributes it in the region. We have been working to change this, and so we have informed our licensee that we will not renew the license agreement when it expires at the end of next year.”

The company added that it would continue to operate in Israel “through a different arrangement.”

Although it was unclear if this was part of the boycott, divestment and sanctions (BDS) campaign waged against Israel among some left-wing circles in the U.S., it appears to fall in line with the goals pushed by progressive radicals on the left in the U.S. and beyond, which have accused the company of being part of Israel’s alleged discriminatory practices against Palestinians.

The company had come under attack by BDS activists over its willingness to operate in Israel through a licensee that sells its product in Yehudah and Shomron. During the recent conflict between Israel and Hamas in May, the attacks intensified and the latest move appears to be the company’s response to this criticism.