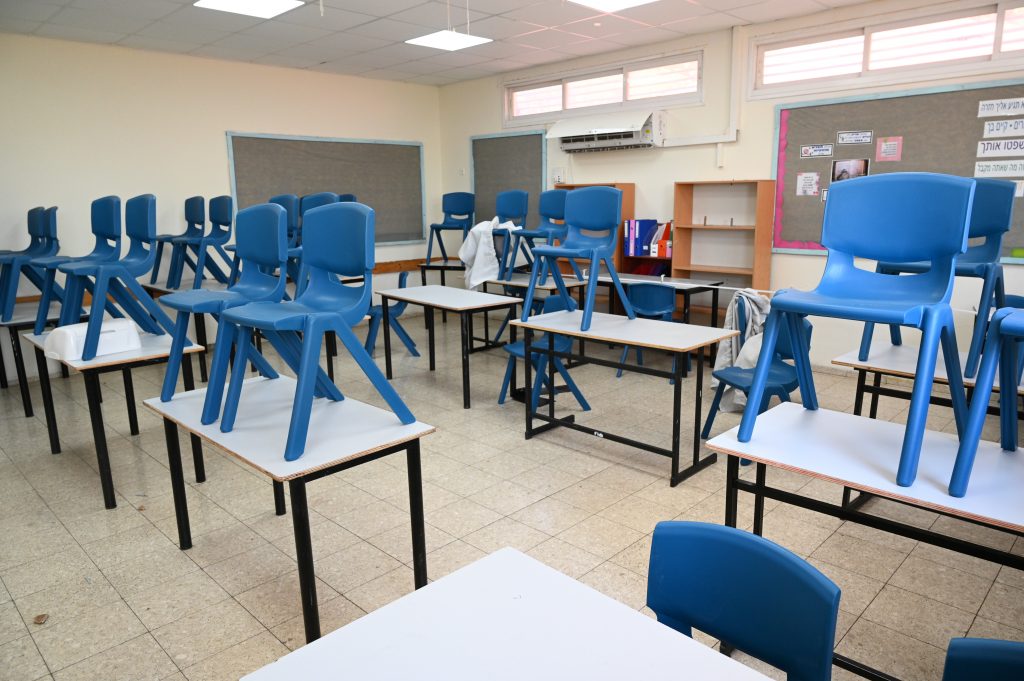 Half of all Israeli school teachers are slated to lose their Green Pass and could be sent home from their classrooms on Sunday when new COVID-19 regulations requiring a booster shot six months after the administration of a second vaccine dose come into effect.

Over one million Israelis have not yet received their third dose and will lose their valid vaccination or recovery certificates starting on Oct. 3, including an estimated 70,000-80,000 teachers.

Since the start of the school year in September, teachers have been asked to present a valid Green Pass – proof of vaccination, a negative COVID test result, or a document proving recovery from the virus – in order to enter schools.

However, last week the Health Ministry announced that teachers who fail to present a valid Green Pass will not only be forbidden from entering schools but also will not get paid moving forward.

Ran Erez, chairman of Israel’s Association of Secondary School Teachers, warned that there would be chaos on Sunday as a result of the new regulations unless the government agrees to a two-month delay.

“What the [government] is planning on implementing is essentially a form of collective punishment that is completely unreasonable and out of proportion,” Erez said. He points out that Prime Minister Naftali Bennett “was previously education minister for four years and he knows the teaching community. Teachers are devoted and know that they have a duty to ensure the well-being of Israeli children.”

According to Erez, some 70,000-80,000 teachers will lose their Green Passes because they have not yet had the chance to go and get their booster shot.

“We’re talking about tens of thousands of teachers who haven’t had the chance to get the booster and it’s not that they are anti-vaxxers – they’ve already gotten the first and second doses,” he added. “But you need to give people enough time to go and get vaccinated.

Erez, who recently sent a formal letter to Bennett asking for an extension, argued that teachers are being unfairly singled out from among public workers. He also noted that high school students themselves are not required to follow the same stringent set of guidelines.

“A 15-year-old student can be just as dangerous and infect others just as much as a 30-year-old teacher,” Erez said.

As a stopgap measure, teachers can obtain a temporary Green Pass by providing a negative COVID-19 test result. But Erez’s association notes that it often takes several hours and up to three days to receive results for a standard PCR test.

A spokesperson at the Education Ministry confirmed that some 50% of teachers will probably lose their Green Pass in the coming days. However, it said that this daunting figure could change by the weekend when the numbers are updated.

Fortunately, the number of education personnel who are completely unvaccinated and who also refuse to get tested remains very small, according to the ministry.

“As of September 1, there were 300 teachers who refused to get vaccinated and get tested,” the Education Ministry spokesperson said.

In spite of concerns over the looming regulations, a spokesperson from the Israel Teachers’ Union, which is not affiliated with the Secondary School Teachers’ Association, said that the vast majority of schools are expected to open as planned. “Teachers who are unvaccinated can take a test; they don’t have to be vaccinated,” the spokesperson said.

Rather than focusing on booster shots, the government needs to address the main issue facing Israel’s education sector, she said, namely, the fact that there is a severe shortage of teachers that has led to untenably large classroom sizes. Some estimates say that roughly 10,000 teachers are urgently needed.

“Everyone is running away from this sector,” the spokesperson said. “We’ve already requested [from the government] to have smaller classrooms, but this idea has unfortunately been turned down.”