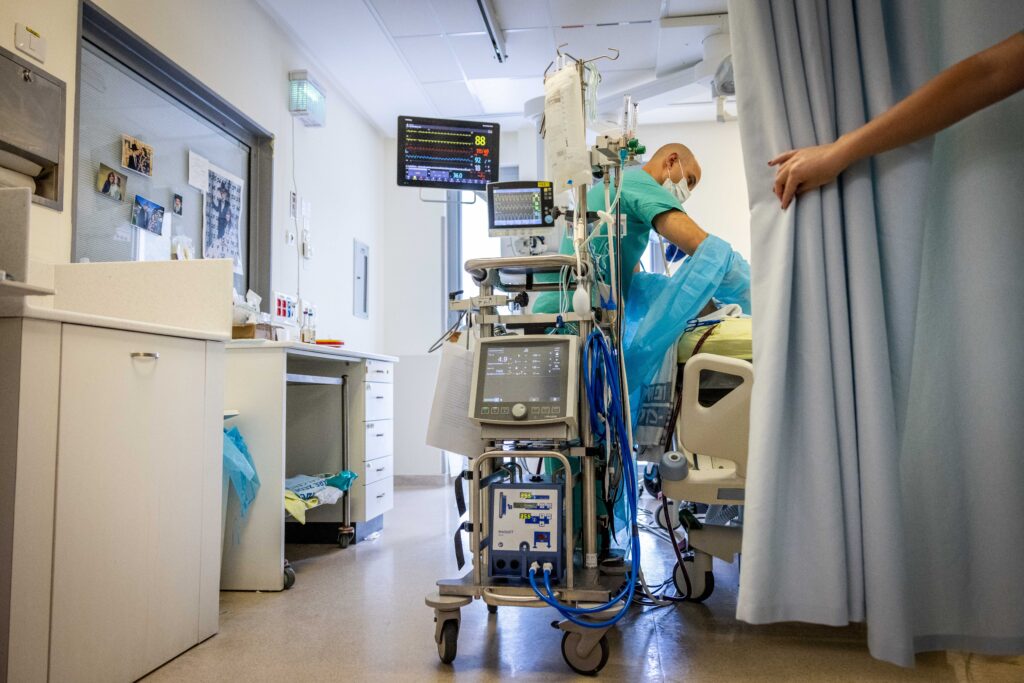 There is increasing concern that Israel will run out of available ECMO machines as a record 53 seriously ill patients were hooked up to them at hospitals across the country, Israel Hayom reported. Of those 53 patients, 91% are unvaccinated. The majority are adults aged 40 to 60. Four percent of patients on ECMO machines received one dose of the vaccine, while 6% had received two out of three available doses. None of them received all three doses of the vaccine.

Last week, Health Ministry Director General Nachman Ash announced he would establish a committee to look into providing hospitals with additional ECMO machines, costing NIS 80,000 (around $25,000) each. There is also a pressing need for trained medical staff and technicians to operate the machines.

With morbidity levels on the decline in the general population, the health system is now focusing its attention on sharp increases in infections in the Arab sector.

“The low scope of vaccination in the Arab sector, alongside a lack of restrictions on gatherings that allow for the continued holding of mass weddings and mass gatherings, serve to increase the continued spread of the virus in Arab society,” according to a senior member of the committee tasked with reining in the virus in Israel’s Arab community.

“Many Arab Israelis have gone back to visit the Palestinian Authority territories, where the coronavirus is running wild, and many of them are being infected and infecting their relatives and their close surroundings when they return to Israel. Just the last day, 20 Palestinians who contracted the virus died in the Ramallah area, and out of 10,000 who were tested, 30% were found to be confirmed carriers [of the virus]. Those are crazy numbers, and everything trickles into Arab society in Israel and from there to the general population.”

According to the senior official, “The government must consider imposing restrictions because in the absence of minimal restrictions on gatherings, like mass weddings, it will be very difficult to flatten the curve in the Arab sector and that will clearly also impact the data for wider society.”

Some argue the discrepancy in morbidity levels is due to the Arab education system remaining open over the last three weeks, at a time when the Jewish education system was closed for the Yamim Tovim. In addition, there are those in the Arab sector who further say the community suffers from a combination of a shortage of Arabic language information on the pandemic and the spread of false information.

Adalah – The Legal Center for Arab Minority Rights in Israel petitioned the High Court to order the addition of Arabic language text to green pass certificates as well as stop issuing the Hebrew language-only green passes until a discussion is held on the subject in another 10 days. In its petition, Adalah argued the lack of Arabic language text was a violation of a High Court ruling on the status of the Arabic language in the State of Israel. Responding to the petition, the state argued it was not legally required to add Arabic text to the pass and that doing so would be technically difficult.

In some Arab neighborhoods of Yerushalayim, there have been claims of a lack of access to vaccines. In addition, a significant portion of the Arab population is uninterested in getting the jab.

In a statement, the Yerushalayim Municipality responded that “in cooperation with the IDF’s Home Front Command, the municipality is conducting a large-scale campaign to encourage vaccination, this alongside the establishment of many vaccination points in all the city’s neighborhoods, including in the east of the city.”