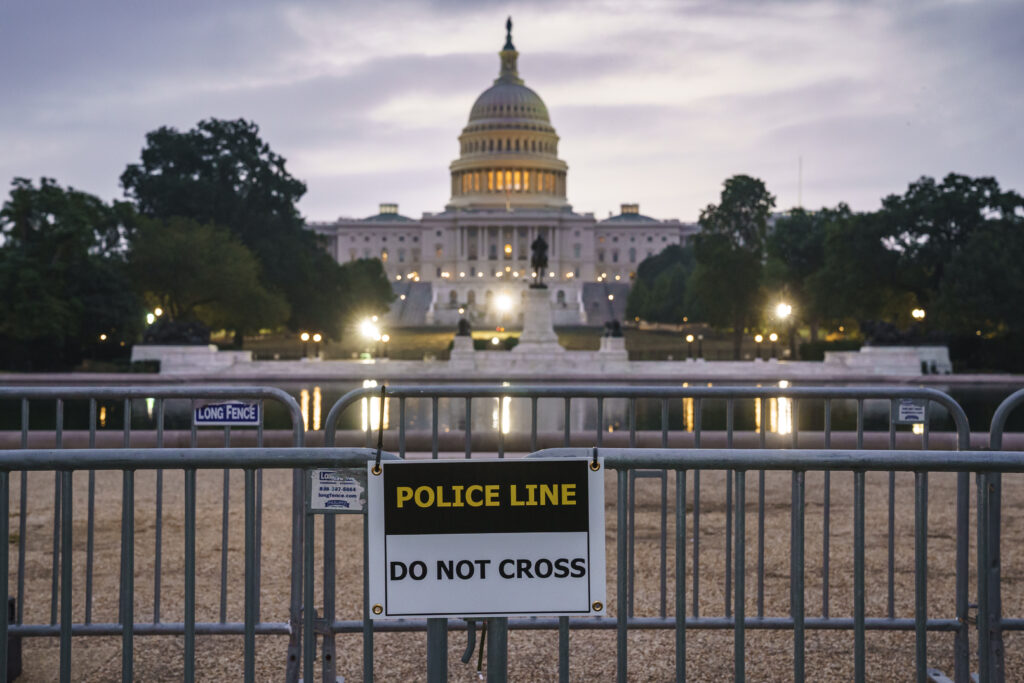 In a city still on edge after the Jan. 6 insurrection, law enforcement bore down in large numbers on the Capitol on Saturday over concerns that a rally in support of the jailed rioters would turn violent. It didn’t.

The crowd was sparse and incidents were few.

The low turnout also called into question whether such rallies will have any staying power as the organizers attempt to tap into the rage of Jan. 6 without the presence of the former president.

Law enforcement had prepared for a confrontation by erecting temporary fencing around the Capitol and deploying heavy dump trucks to ring the rally site. Local police departments and the U.S. National Guard were on standby.

The security might have been unnecessary in the end, but the volatility around the lie that the 2020 election was stolen and the presence of extremists and white nationalist groups on Jan. 6 have made it impossible to predict how such events will go.

U.S. Capitol Police said they received intelligence information leading up to the weekend that was similar to what was missed in January, when law enforcement was only expecting a free speech protest and Trump supporters violently stormed the Capitol.

Republican lawmakers, including those who had voted that day to challenge Biden’s election, avoided Saturday’s rally. Rally organizer Matt Braynard took elected officials to task for not backing up those now in jail and introduced candidates who are running for elected office.

Counterprotesters stood by and jeered. Some held anti-Trump signs and one man who had confronted some of the pro-Trump protesters was quickly removed by police, who used bicycles to shield him from the crowd as they escorted him down the street.

One person was arrested in the crowd for carrying a knife and a second man was arrested after someone reported to officers that they saw him carrying what appeared to be a handgun, police said. Two other people who police say were wanted in Texas – for a firearms charge and probation violation – were also arrested after being pulled over near the Capitol Saturday morning.

Braynard, a former Trump campaign staffer, opened in calm and deliberate tones. He said the event was for the defendants held behind bars.

On Jan. 6, dozens of law enforcement officers were left bloodied and and beaten as the crowd of rioters, some armed with pipes, bats and bear spray, charged into the Capitol, quickly overrunning the overwhelmed police force. One officer was beaten and shocked with a stun gun repeatedly until he had a heart attack.

The Associated Press reviewed hundreds of court and jail records for the Capitol riot defendants to uncover how many were being detained and found roughly 63 held in federal custody awaiting trial or sentencing hearings.

At least 30 are jailed in Washington. The rest are locked up in facilities across the country. They have said they are being treated unfairly, and one defendant said he was beaten.

The U.S. Court of Appeals for the District of Columbia Circuit has set standards for judges to apply in deciding whether to jail a Capitol riot defendant. A three-judge panel of the appeals court ruled in March that rioters accused of assaulting officers, breaking through windows, doors and barricades, or playing leadership roles in the attack were in “a different category of dangerousness” than those who merely cheered on the violence or entered the building after it was breached.