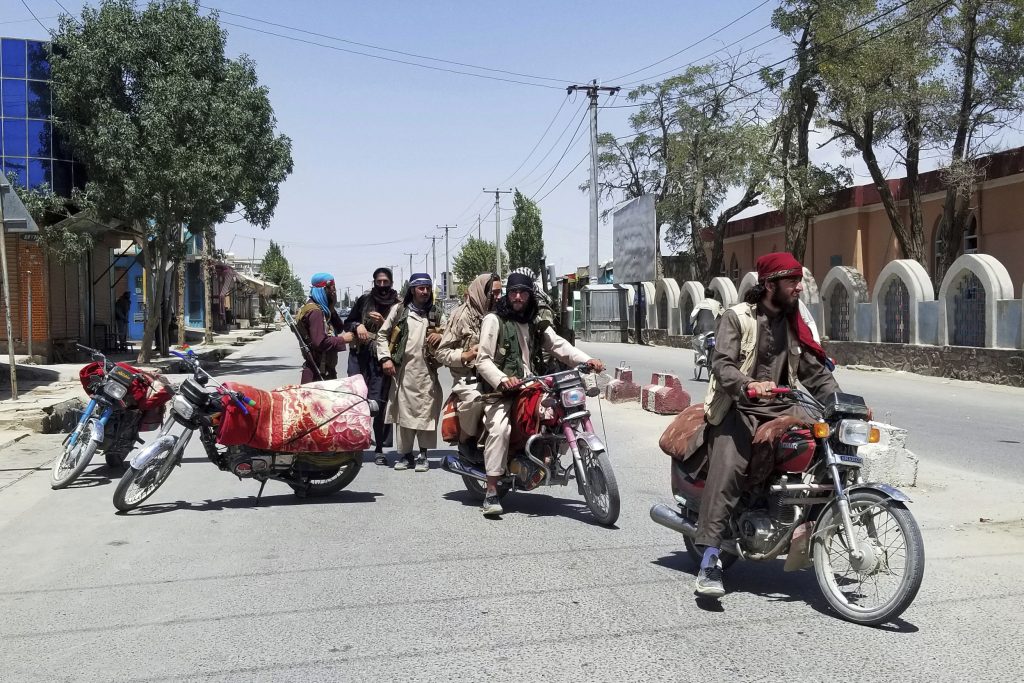 The Taliban captured a provincial capital near Kabul on Thursday, the 10th the insurgents have taken over a week-long blitz across Afghanistan as the U.S. and NATO prepare to withdraw entirely from the country after decades of war.

The terrorists raised their white flags imprinted with an Islamic proclamation of faith over the city of Ghazni, just 130 kilometers (80 miles) southwest of Kabul. Sporadic fighting continued at an intelligence base and an army installation outside the city, two local officials told The Associated Press.

The Taliban published videos and images online showing them in Ghazni, the capital of a province with the same name.

Afghan security forces and the government have not responded to repeated requests for comment over the days of fighting. However, President Ashraf Ghani is trying to rally a counteroffensive relying on his country’s special forces, the militias of warlords and American airpower ahead of the U.S. and NATO pullout at the end of the month.

While the capital of Kabul itself has not been directly threatened in the advance, the stunning speed of the offensive raises questions of how long the Afghan government can maintain control of the slivers of the country it has left. The government may eventually be forced to pull back to defend the capital and just a few other cities, as the fighting displaces thousands of people.

Mohammad Arif Rahmani, a lawmaker from Ghazni, said the city had fallen to the insurgents. Ghazni provincial council member Amanullah Kamrani also told the AP that but added that the two bases outside of the city remain held by government forces.

Kamrani alleged that Ghazni’s provincial governor and police chief made a deal with the Taliban to flee after their surrender. Taliban video and photos purported to show the governor’s convoy passing by Taliban fighters unstopped as part of the deal. The two officials could not be immediately reached for comment.

Militants crowded onto one seized Humvee and drove down one main road in Ghazni, with the golden dome of a mosque near the governor’s office visible behind them, yelling: “God is great!” The insurgents, cradling their rifles, later gathered at one roundabout for an impromptu speech by a commander. One militant carried a rocket-propelled grenade launcher. They smiled as children and the curious gathered around them.

The loss of Ghazni marks yet another strategic setback for Afghan government forces. The city sits along the Kabul-Kandahar highway, a major road that connects the Afghan capital to the country’s southern provinces. That could complicate resupply and movement for government forces, as well as squeeze the capital from the south.

Already, the Taliban’s week-long blitz has seen the militants seize nine other provincial capitals around the country. Many are in the country’s northeast corner, pressuring Kabul from that direction as well.

Angry at pan-Arab satellite news network Al-Jazeera for reporting on troops earlier surrendering in Kunduz, Gen. Ajmal Omar Shinwari said the channel would be investigated by authorities. Al-Jazeera, based in Qatar where the Taliban has a diplomatic office, did not immediately respond to a request for comment.

Fighting meanwhile raged in Lashkar Gah, one of Afghanistan’s largest cities in the Taliban heartland of Helmand province, where surrounded government forces hoped to hold onto that provincial capital.

On Wednesday, a suicide car bombing marked the latest wave of violence to target the capital’s regional police headquarters. By Thursday, the Taliban had taken the building, with some police officers surrendering to the militants and others retreating to the nearby governor’s office that is still held by government forces, said Nasima Niazi, a lawmaker from Helmand.

Niazi said she believed the Taliban attack killed and wounded security force members, but she had no casualty breakdown. Another suicide car bombing targeted the provincial prison, but the government still held it, she said. The Taliban’s other advances have seen the militants free hundreds of its members over the last week, bolstering their ranks while seizing American-supplied weapons and vehicles.

“The Taliban used civilian houses to protect themselves, and the government, without paying any attention to civilians, carried out airstrikes,” she said.

With the Afghan air power limited and in disarray, the U.S. Air Force is believed to be carrying out strikes to support Afghan forces. Aviation tracking data suggested U.S. Air Force B-52 bombers, F-15 fighter jets, drones and other aircraft were involved in the fighting overnight across the country, according to Australia-based security firm The Cavell Group.

The U.S. Air Force’s Central Command, based in Qatar, did not immediately respond to a request for comment Thursday.

The success of the Taliban offensive also calls into question whether they would ever rejoin long-stalled peace talks in Qatar aimed at moving Afghanistan toward an inclusive interim administration as the West hoped. Instead, the Taliban could come to power by force — or the country could splinter into factional fighting like it did after the Soviet withdrawal in 1989.

In Doha, U.S. envoy Zalmay Khalilzad has met with diplomats from China, Pakistan and Russia in an effort to warn the Taliban they could again be considered international pariahs if they continue their offensive, State Department spokesman Ned Price said. Khalilzad also plans to meet with Afghan government and Taliban officials as the fighting goes on without a sign of it abating.

In Germany, Foreign Minister Heiko Maas warned the Taliban not to try to take power by force and impose a strict interpretation of Islamic law that severely limits rights. Maas told German public news channel ZDF that if the Taliban did so, the country would no longer receive “a cent” of development aid from Germany, which is currently estimated to be around 430 million euros ($504 million) annually.

The multiple battlefronts have stretched the government’s special operations forces — while regular troops have often fled the battlefield — and the violence has pushed thousands of civilians to seek safety in the capital.

The latest U.S. military intelligence assessment is that Kabul could come under insurgent pressure within 30 days and that if current trends hold, the Taliban could gain full control of the country within a couple of months.