The chief executive of Unilever on Thursday said the global consumer goods giant remains “fully committed” to doing business in Israel, distancing himself from this week’s announcement by the company’s Ben & Jerry’s ice cream brand to stop serving Judea and Samaria and eastern Yerushalayim. But CEO Alan Jope gave no indication that Unilever would force Ben & Jerry’s to roll back its controversial decision, even as the companies face the prospect of counter-boycotts and divestment, including from some of the largest U.S. states like Texas, Florida and New York.

Ben & Jerry’s announcement Monday is one of the strongest steps by a well-known company against Israel. The Israeli government has condemned the decision, accusing the company of joining a Palestinian-led boycott campaign against Israel. It has urged 35 American states with anti-boycott laws to punish Unilever.

In a conference call with investors, Jope said that Ben & Jerry’s, which has a long history of liberal activism, had made the decision on its own.

He noted that under its purchase agreement with Ben & Jerry’s in 2000, the iconic ice cream company maintained broad independence over its social justice policies and that Unilever respected that arrangement.

“Obviously it’s a complex and sensitive matter that elicits very strong feelings,” he said. “If there is one message I want to underscore in this call, it’s that Unilever remains fully committed to our business in Israel.”

That includes a new 35 million euro ($41 million) razor factory, corporate offices and facilities that employ some 2,000 people, hundreds of millions of dollars of investment and support for “social programs,” he said.

He said “it is not our intent” to regularly delve into such sensitive matters.

“It’s been a longstanding issue for Ben & Jerry’s,” he said. “We were aware of this decision by the brand and its independent board, but it’s certainly not our intention that every quarter will have one quite as fiery as this one.”

It remained unclear whether his comments would calm the uproar in Israel or among Israel supporters in the U.S.

Israel’s new prime minister, Naftali Bennett, said earlier this week that he had spoken to Jope about what he called a “clearly anti-Israel step.”

Bennett, a former leader of the settlement movement, said Thursday that Israel would “use the tools at its disposal — including legal — on this issue” and that those boycotting Israel “need to know that there will be a price to pay.”

In its announcement, Ben & Jerry’s said it would step selling ice cream in the “occupied Palestinian territories,” saying such sales were “inconsistent with our values.”

Israel’s ambassador to the United States and United Nations, Gilad Erdan, this week sent a letter to the governors of 35 U.S. states urging them to punish Unilever under anti-boycott laws.

On Thursday, he joined Bennett in hosting a delegation of foreign diplomats. Erdan said he was enlisting the diplomats in the fight against what he called “anti-Israel discrimination” on the international stage.

Unilever may face serious financial repercussions from the move, as anti-BDS states may divest their pension funds from the company and refuse to enter into any contracts for its goods.

Texas Comptroller Glenn Hegar said he has directed his staff “to determine whether any specific action has been taken by Ben & Jerry’s or Unilever would trigger a listing” under the state’s anti-BDS law.

“Texans have made it very clear that they stand with Israel and its people,” Hegar said. “We oppose actions that could undermine Israel’s economy and its people.”

Florida state CFO Jimmy Patronis, in a letter to Ben & Jerry’s CEO Matthew McCarthy, warned that the  boycott may result in repercussions for the ice cream brand and its parent company.

“Florida law prohibits the state from investing in companies that discriminate against Israel by refusing to deal with or terminate business activities in a discriminatory matter, Patronis wrote. “Thus, as Florida’s Chief Financial Officer, and a Trustee of the State Board of Administration (SBA), it is my belief that Ben & Jerry’s brazen refusal to do business in Israel will result in your placement on the Scrutinized Companies that Boycott Israel List. Consequently, the state would be prohibited from investing in Ben & Jerry’s or its parent company, Unilever, PLC. Further, if Ben & Jerry’s is added to the list, the company, along with Unilever PLC will become ineligible to enter into or renew contracts with the State of Florida or any Florida county or municipality.”

New York City Mayor Bill de Blasio, a BDS opponent, said Tuesday, “I will not be eating any more Cherry Garcia for a while,” referencing a Ben & Jerry’s ice cream flavor, in response to a question by a Hamodia reporter about whether the mayor would join the counterboycott of Ben & Jerry’s.

New York Gov. Andrew Cuomo is another long-time opponent of the BDS movement. Asked by Hamodia whether the state would be taking any action against Ben & Jerry’s or Unilever, Cuomo spokesman Rich Azzopardi replied Thursday that the matter “is undergoing a legal review.”

“State Comptroller Thomas DiNapoli, as Trustee of the Fund, is troubled and concerned about reports suggesting that Ben & Jerry’s, a Unilever wholly owned subsidiary, is involved in BDS activities,” Gordon wrote. “Therefore, pursuant to the requirements of the Fund’s policy, this letter serves as notice that the Fund intends to include Unilever on our list of companies participating in BDS activity if these reports are correct.

“I would appreciate hearing from you, within 90 days, as to whether these reports are accurate. Please confirm or deny whether Unilever or its subsidiaries have undertaken any activities with the intent to penalize, inflict economic harm on, or limit commercial relations with, the State of Israel. If the company fails to respond or fails to demonstrate that it has not engaged in BDS activities, the Fund’s investment in Unilever will be subject to a detailed review and staff recommendation, which may include investment restrictions, in accordance with the Fund’s BDS Policy.”

A spokesperson for New York City Comptroller Scott Stringer did not respond to Hamodia’s request for comment.

The countermeasures extended to smaller municipalities as well. Hempstead, Long Island, Town Councilman Bruce Blakeman has said the town commissioners will be directed “to cease any contracts and municipal business” with Ben & Jerry’s and Unilever.

Oyster Bay, another town in Long Island, “will not give any business to Ben & Jerry’s [or] its parent company, Unilever.”

Many Jewish owned stores in the U.S. have removed Ben & Jerry’s from their freezers.

Unilever stock closed Friday down more than 4% for the week.

Below is letter from New York State Comptroller’s Office to Unilever: 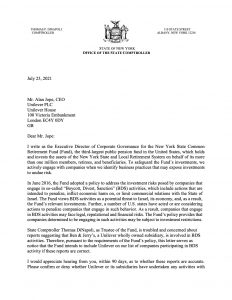 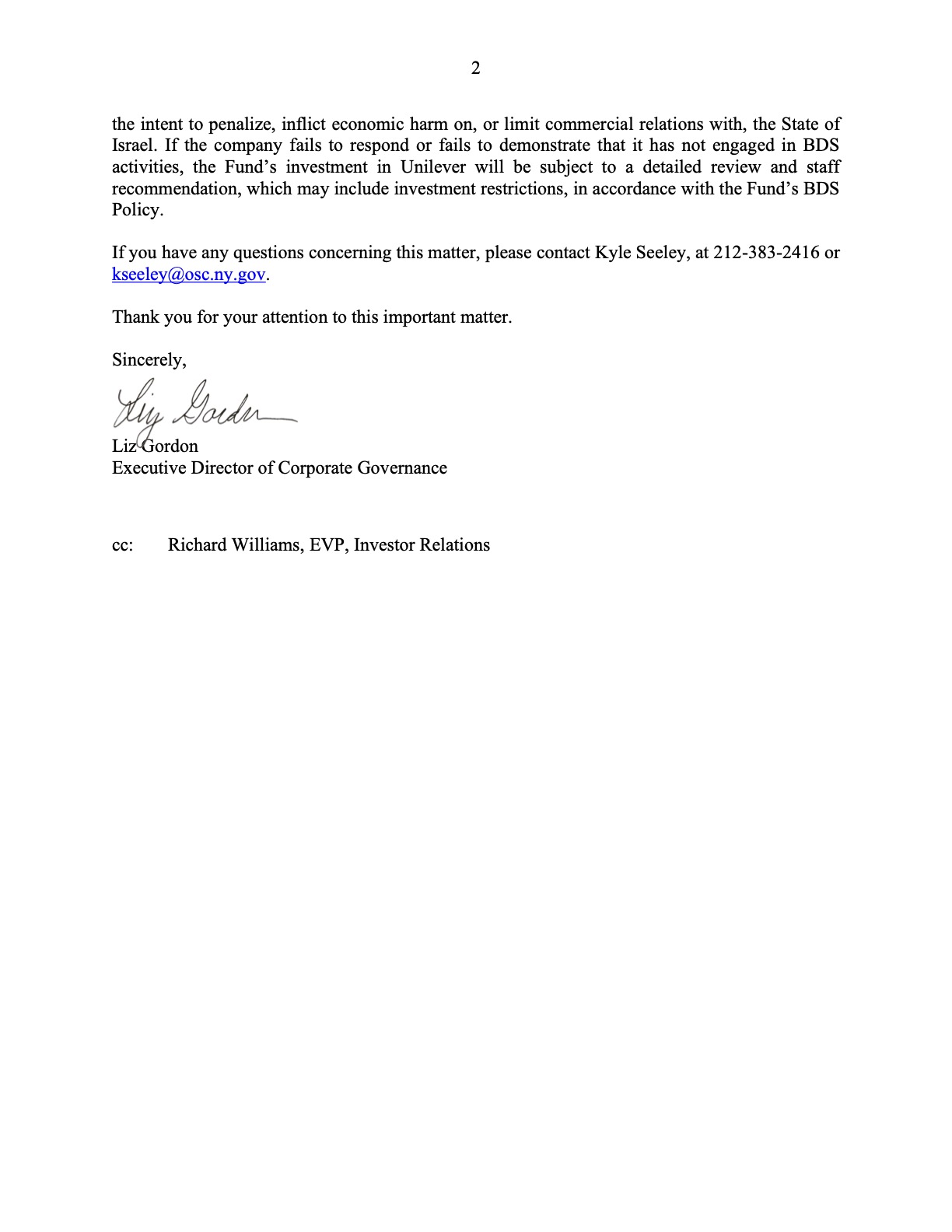