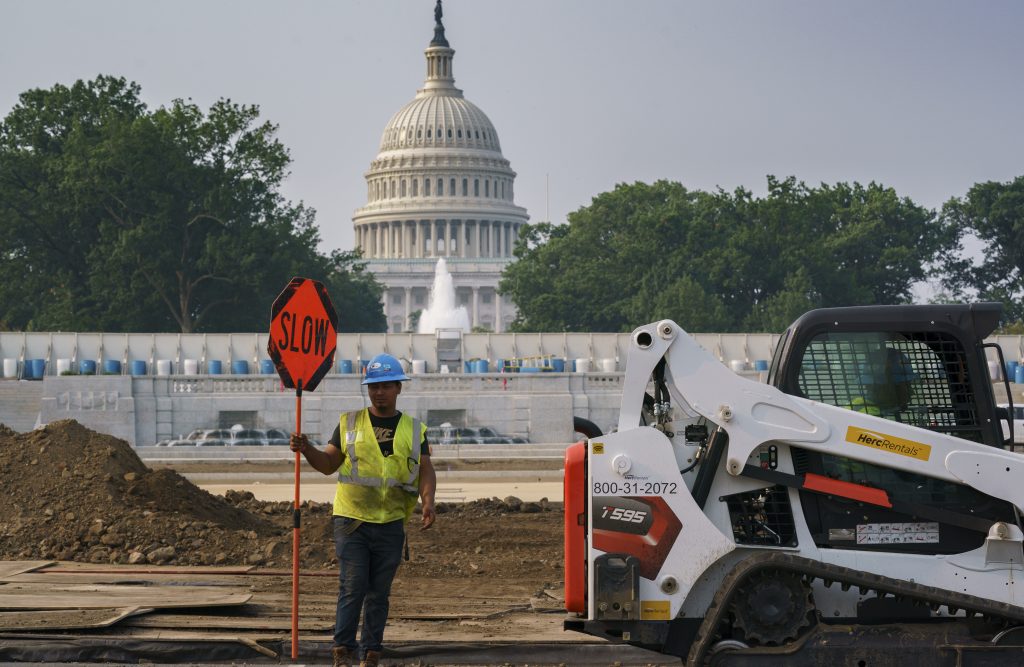 Senate Republicans rejected an effort Wednesday to begin debate on the big infrastructure deal that a bipartisan group of senators brokered with President Joe Biden, but pressure was mounting as supporters insisted they just needed more time before another vote possibly next week.

Senate Majority Leader Chuck Schumer, D-N.Y., had scheduled the procedural vote to nudge along negotiations that have dragged for weeks. But Republicans mounted a filibuster, saying the bipartisan group still had a few unresolved issues and needed to review the final details. They sought a delay until Monday.

“We have made significant progress and are close to a final agreement,” the bipartisan group of senators, 11 Republicans and 11 Democrats, said in a joint statement after the vote. The senators said they were optimistic they could finish up “in the coming days.”

The nearly $1 trillion measure over five years includes about $579 billion in new spending on roads, broadband and other public works projects — a first phase of Biden’s infrastructure agenda, to be followed by a much broader $3.5 trillion measure from Democrats next month.

Biden’s top priority is at a critical juncture, posing a test of his ability to forge bipartisan cooperation in Washington and make investments the White House views as crucial to the nation’s ability to pull out of the COVID-19 crisis and spur economic growth.

The president traveled to Ohio later Wednesday to promote his economic policies, and was calling his infrastructure agenda a “blue-collar blueprint for building an American economy back.” He has said that Americans overwhelmingly support his plan.

The party-line vote blocked the bill from advancing, 51-49, and fell far short of the 60 votes required under Senate rules. Schumer switched his vote to “no” at the end, a procedural step that would allow him to move to quickly reconsider.

The bipartisan group has labored for days with Biden aides to strike a deal, which would be a first phase of the president’s eventual $4 trillion-plus package of domestic outlays — not just for roads and bridges, but foundations of everyday life including child care, family tax breaks, education and an expansion of Medicare for seniors.

The next steps are uncertain, but the bipartisan group insists it is close to a deal and expects to finish soon.

“We’re voting no today because we’re not ready, but we’re saying we do want to take up this bill as soon as we are,” said Sen. Rob Portman, R-Ohio, a leader of the effort. “I think that’ll be Monday.”

At least 11 Republicans signed on to a letter to Schumer saying they would vote yes to proceed on Monday, if certain details about the package are ready.

Republican Sen. Todd Young of Indiana was among the Republicans who signed the letter and said he was “cautiously optimistic” they can reach a bipartisan deal.

Restless Democrats, who are facing a crowded calendar while trying to deliver on Biden’s priorities, nevertheless said they are willing to wait if a deal is within reach.

“I’m willing to give it another chance next week,” said Sen. Richard Blumenthal, D-Conn. “But we need to fish or cut bait.”

The senators in the bipartisan group were joined for a private lunch ahead of the vote by the two leaders of the House’s Problem Solvers Caucus, Rep. Josh Gottheimer, D-N.J., and Rep. Brian Fitzpatrick, R-Pa., a bipartisan group generally supportive of the effort.

Schumer said senators are in the fourth week of negotiations after reaching agreement on a broad framework for infrastructure spending with the White House. He said Wednesday’s vote was no different from other times when the Senate sought to get the ball rolling on debate and “not a deadline to have every final detail worked out.”

But McConnell, who encouraged Republicans to vote against it, called the vote a “stunt” that would fail, but he emphasized senators were “still negotiating in good faith across the aisle.”

“Around here, we typically write the bills before we vote on them,” he said.

Biden has been in touch with both Democrats and Republicans for several days, and White House press secretary Jen Psaki traveling with the president Wednesday on Air Force One, said the administration was “encouraged.”

While Biden proposes paying for his proposals with a tax hike on corporations and wealthy Americans who earn more than $400,000 a year, the bipartisan group has been working almost around the clock to figure out a compromise to pay for its package, having dashed ideas for boosting the federal gas tax or strengthening the IRS to go after tax scofflaws.

Instead, senators in the bipartisan group are considering rolling back a Trump-era rule on pharmaceutical rebates that could bring in $170 billion. some of which could be used for infrastructure. They are also targeting unspent COVID-19 relief aid to health care providers and extending multiyear, modest reductions in a wide array of federal benefit programs, according to two people familiar with the talks who described the details on condition of anonymity.

Senators are also still haggling over public transit funds. Typically, spending from the federal Highway Trust Fund has followed the formula of 80% for highways and 20% for transit. Some Republicans are concerned that the ratio would change to 82%-18% under the bipartisan bill, said Sen. Mitt Romney, R-Utah.

But Sen. Sherrod Brown, D-Ohio, said: “There’s not a lot of sentiment for public transit on their side. They don’t really believe in the word ‘public.'”

Ten Republicans would have been needed in the evenly split Senate to join all 50 Democrats in reaching the 60-vote threshold required to advance the bill past a filibuster to formal consideration.

Many Republicans are wary of moving ahead with the first, relatively slim package, fearing it will pave the way for the broader $3.5 trillion effort Democrats are preparing to pass on their own under special budget rules that only require 51 votes. Vice President Kamala Harris can break a tie.

Democrats hope to show progress on that bill before lawmakers leave Washington for their recess in August.

Meanwhile, House Speaker Nancy Pelosi has been working to keep restless House Democrats in line as they grow impatient with the sluggish Senate pace.

Rep. Peter DeFazio, D-Ore., the chairman of the House Transportation and Infrastructure Committee, sent a letter with 30 Democrats on the panel warning that the Senate proposal was inadequate and that House lawmakers want a seat at the negotiating table for any final product.