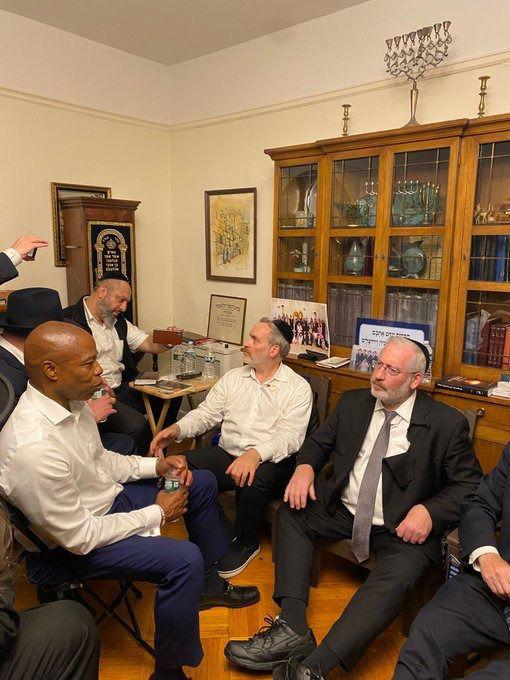 Mehlman and his siblings are sitting shivah for their mother Harriet (Hudel) Mehlman, a”h, who passed away over the weekend at the age of 92.

Adams noted at the shivah that he lost his own mother in April “in the middle of the campaign; I didn’t even have time to mourn her.”

Then, referencing rising gun violence in the city — an issue he campaigned heavily on — Adams said, “But this is such a natural process: sons are supposed to bury their mothers. Mothers are not supposed to bury their sons. And far too many mothers are burying their sons in this city, because of the violence that we’re seeing, because of the hate that we’re seeing.”

“And during the level of uncertainty,” Adams continued, “I went to Josh, he brought the community together, they supported me. You were the difference maker. I’m the Democratic nominee because you treated me like a friend. And I’m never going to forget that.”

Adams had built ties with the Jewish community during his years as a state senator and then in his current position as Brooklyn borough president. But early in the campaign, another candidate, Andrew Yang, received support from many activists in the Jewish community, which Adams expressed frustration over.

After most of the ranked-choice tabulation has been completed, Adams is leading runner up Kathryn Garcia by 8,426 votes. Some absentee ballots remain to be counted, but the Associated Press has called the race for Adams, and Garcia and the other candidates have conceded the race.

Voting results show the neighborhoods represented by the FJCC going heavily for Adams.

In a city where registered Democrats outnumber Republicans by more than 6 to 1, Adams is expected to cruise to victory in the general election against Curtis Sliwa, the Republican nominee. Sliwa is under fire in the Jewish community for comments he made several years ago sharply critical of Orthodox Jews.

Adams, a former NYPD captain, ran a campaign focused on public safety, as the city faces soaring shootings and murders. The Jewish community is also reeling from a spate of anti-Semitic crimes.

Adams noted said he has spoken with Joseph Borgen, a Jewish man beaten in Times Square by Palestinian-supporters as he headed to a pro-Israel rally in May while Israel and Hamas were in the midst of their latest armed conflict.