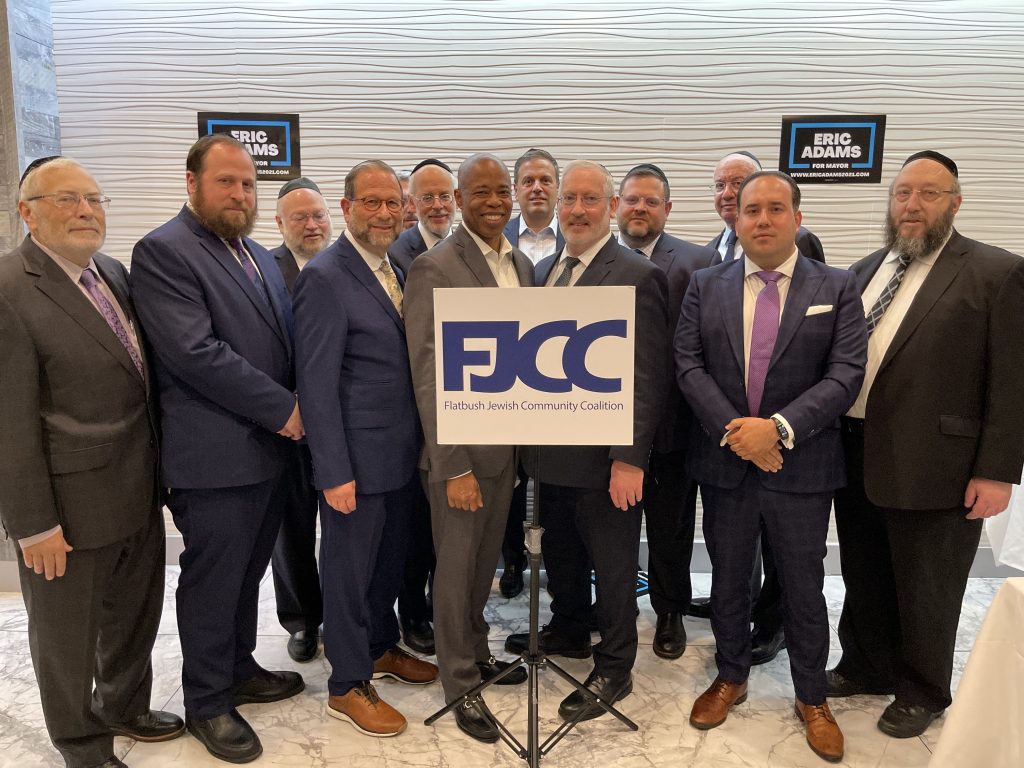 New York City mayoral candidate Eric Adams won the support of the Flatbush Jewish Community Coalition on Thursday, snagging a big prize in the endorsement race in the Orthodox community.

Adams, who previously was an NYPD captain and state senator and currently serves as Brooklyn borough president, won the FJCC’s endorsement based on his longstanding relationship with the community and due to his tough-on-crime and pro-business stances.

“Eric has gained the trust of the community over the years, and we have appreciation for his work with us,” FJCC Chairman Josh Mehlman told Hamodia Wednesday night, in advance of the official endorsement announcement. “And as a former NYPD captain, he understands what is needed to make our community, and communities across this city, feel safe once again.”

The board and executive board of the FJCC is comprised of some six dozen lay leaders representing yeshivas, shuls and communities in the Greater Flatbush area, including Midwood, Kensington, Homecrest, Gravesend, Madison and Marine Park.

At the endorsement event Thursday morning at Pescada restaurant in Midwood, FJCC executive board member Chaskel Bennett said the primary concerns for community members are public safety and religious freedom.

“Flatbush needs and wants an experienced, pro-police, anti-crime mayor, one who will deliver a quality of life that is rising and a crime rate that is falling, and not the other way around,” and “the threat to religious freedom and to our ability to live as Torah-observant Jews, free of government overreach, is also all too real,” said Bennett, noting that Flatbush was among the Orthodox Jewish communities placed in a highly restrictive “red zone” during the second wave of COVID last fall. “With yeshiva education still in the throes of government crosshairs, the next mayor will play a central role in our ability to freely practice our religion. Make no mistake about it: religion is on this ballot. Jewish voters demand a mayor who will respect, value and assist us in pursuing our unique and constitutionally protected way of life.”

In the early months of the campaign, Adams spoke of enforcing a state-mandated secular curriculum on yeshivas, but he has subsequently visited, and spoken highly of, a Boro Park yeshiva, and has taken a pro-yeshiva position.

Asked Thursday by a Hamodia reporter what yeshiva regulation would look like under an Adams administration, the candidate responded, “It’s about support,” adding, “People don’t realize that the overwhelming number of yeshivas are doing an amazing job. We’re not going in to kick in doors in yeshivas, we’re not going in to change the quality of life, we’re going to do what I’m promoting across this entire city: you’re going to have a culturally-sensitive education … When I walked into yeshivas, I saw exactly what I wanted to see. I saw culturally sensitive material, and we are not going in to change the way of life of this community.”

Virtually all the endorsements from the Orthodox community have gone to Adams or Andrew Yang.

Yang, an entrepreneur who has never held political office and does not have the long-time ties in the community that Adams does, quickly gained popularity in the community for his consistent promise of yeshiva autonomy and strong stance against the anti-Israel BDS movement, and he swept the early Orthodox endorsements, winning the support of coalitions of Chassidic activists and yeshiva administrators of Boro Park and Williamsburg, as well as Asssemblymen Daniel Rosenthal and Simcha Eichenstein, and Councilman Kalman Yeger. But within the past ten days, Adams has gotten the support of groups representing Crown Heights and Far Rockaway, the Sephardic Community Federation, as well as the FJCC.

In his comments at Thursday’s endorsement event, Adams didn’t name Yang, but had passively harsh words for those who supported his upstart opponent, indicating his frustration at the inroads Yang had made in the community.

“This [FJCC endorsement] is important to me, but it’s also important for your community, because people are watching. And they’re saying, ‘Wait a minute. These guys are not going with Eric, who has had an unbelievable relationship with this community, has invested in this community?'” said Adams. “This race is about what you invested in as much as what I invested in. And every elected official who’s up and coming, every elected official who’s in office, they always looked at me as a symbol of the relationship with your community. And if someone can come in, out of nowhere, give you false promises and just say anything, and all of a sudden take away a long relationship with you, that’s going to send a bad message … Today’s endorsement is really saying the partnership we fostered many years ago, we’re going to take that partnership into City Hall.”

The primary will be held June 22, with early voting beginning June 12. Polls have shown Adams and Yang in a close battle atop the large field of candidates, along with a surging Kathryn Garcia, the former Sanitation commissioner whose campaign has been boosted in recent weeks following endorsements by The New York Times and Daily News. FJCC sources told Hamodia that Yang and Garcia had been co-finalists for the group’s endorsement.

Mehlman described Cornegy as “a friend for years, someone who we’ve come to know and trust, someone who understands our community and understands the entire borough, and we believe strongly that he’s the right person to step into this role.”