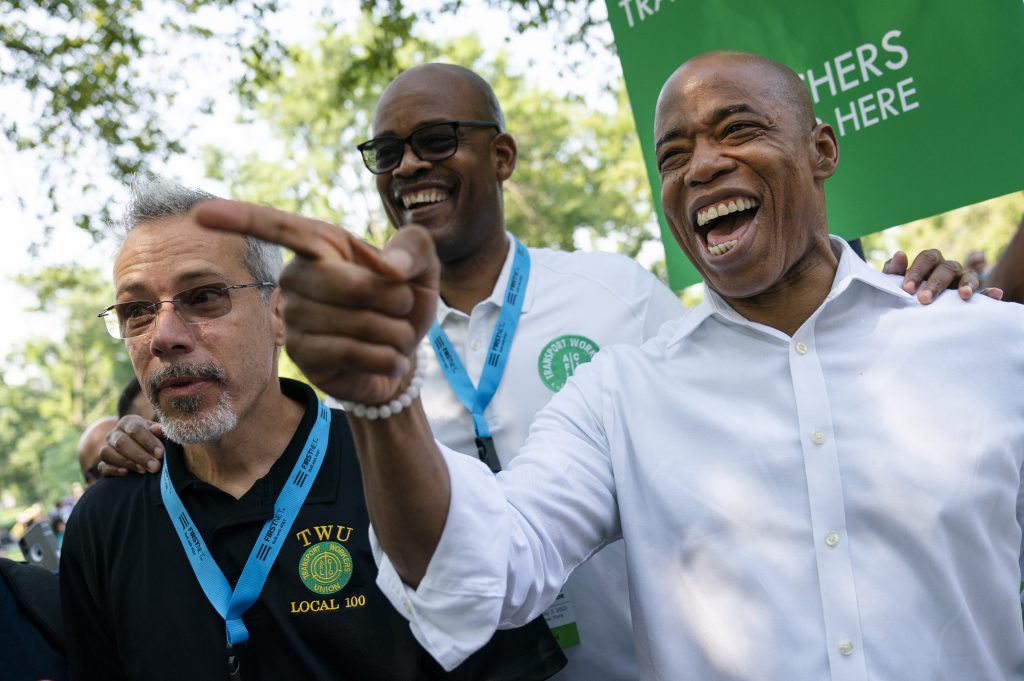 The triumph of a moderate Democrat in the mayoral primary in deep blue New York City appears to accelerate a recent trend of some of the party’s most fervent voters breaking away from its most progressive candidates.

Eric Adams, a former New York Police Department captain, this week became his party’s nominee to lead the nation’s largest city after making a centerpiece of his campaign his rejection of left-leaning activists’ calls to defund the police.

His win comes on the heels of victories by self-styled pragmatic candidates in relatively low-turnout elections — which tend to draw the most loyal base voters — in races for a U.S. House seat in New Mexico, a congressional primary in Louisiana and a gubernatorial primary in Virginia.

And those successes come a year after President Joe Biden defeated more liberal opponents to capture his party’s nomination on his way to winning the White House.

It all raises questions as to the best candidates and approaches for Democrats trying to hold on to slim majorities in Congress next year and make inroads in Republican-dominated state legislatures.

“Because there was such an intensity of a reaction on the left to (former President Donald) Trump, many in the political ecosystem mistook that for ideological intensity on the left,” said Jennifer Palmieri, who served as White House communications director for President Barack Obama. “The same ideological shift on the right — Republicans moving with Trump — did not happen on the left and voters are instead being more pragmatic and less ideological.”

The long-simmering family feud between the progressive and moderate wings of the Democratic Party exploded into full view in the 2016’s presidential primaries when Sen. Bernie Sanders of Vermont, a self-described democratic socialist, waged a surprisingly robust challenge against establishment favorite Hillary Clinton. Sanders’ movement drew bigger crowds and seemingly more energy, if not ultimately more votes, than Clinton and helped define an intraparty divide.

In its aftermath, liberals scored some big victories, none more seismic than Alexandria Ocasio-Cortez’s 2018 primary defeat in New York of Rep. Joe Crowley, a member of the House leadership. But five months later, it was largely center-left Democrats whose wins helped flip the House of Representatives to their party in the general election.

The 2020 presidential primaries were largely perceived as a battle between liberals like Sanders and Massachusetts Sen. Elizabeth Warren and a group of moderates from which Biden emerged after early missteps. The battle lines drawn during that campaign continue to shadow the Democratic Party in 2021.

Trump tried vainly to paint Biden as a socialist and tie him to the effort to defund the police that took hold in some quarters of the left after a number of Black people, including George Floyd, were killed by white police officers, setting off protests that rocked some cities. Biden, long a friend of law enforcement, rejected the “defund the police” call even as he pushed for reforms, but the issue became something of a litmus test for Democratic candidates.

Biden and his staff have taken pride in ignoring a lot of the dialogue on Twitter, often fueled by the most inflexible partisans from both parties, a sentiment Adams echoed on Wednesday, the day after his victory was announced.

“We have reached a point where we’re allowing the dialogue to get in the way of moving us in the right direction,” Adams told CNN, “and I’m hoping that what happened here in New York City, people are going to see a cross section of everyday, working class New Yorkers came together.”

Typically, off-year special elections and primaries feature small turnouts and, often, that is advantageous for a candidate who fires up the most dedicated — and often extreme — wings of the party. But that has not been the case in 2021.

But while moderate Democrats have racked up recent victories, some triumphant candidates are not so ideologically clear cut.

Adams’ win is the most high-profile notch on the pragmatists’ ledger. On a number of issues he positioned himself to the right of his rival Democrats, but while he offered a full-throated rejection of defunding the police, his own backstory is more nuanced.

When combined with New York City voters’ tendency to elect mayors with an emphasis on local issues and not ideological purity, it makes drawing national conclusions complicated.

Though known as one of the most liberal cities in the nation, New Yorkers voted for non-Democrats in five straight mayoral elections from 1993-2009, choosing Rudy Giuliani twice and Michael Bloomberg three times. They cast their ballots with eyes toward crime, education and efforts to rebuild after the Sept. 11 terror attacks.

A rise in shootings as the city emerges from the COVID-19 pandemic helped animate the stretch run of Adams’ campaign as he edged out fellow moderate Kathryn Garcia and liberal Maya Wiley. But his lifetime of speaking out against police misconduct and his blunt, working-class style make it difficult to pigeonhole him.

Adams, 60, made a strong connection with voters in the city’s boroughs outside Manhattan, and he spoke frequently on the campaign trail of being beaten by police officers as a teenager and joining the force to reform it from within. He was a founder of a group called 100 Blacks in Law Enforcement Who Care that fought against racial profiling and advocated for the hiring of more officers of color.

“So obviously that’s going to touch a certain segment of the New York population. He then quickly pivots to, ‘but it can’t just be cops and Black people, we have to address Black on Black crime,'” Greer said. “Well, that’s a message that conservative whites, conservative Blacks, of which there are many, and other groups also agree with as well.”

Some Democrats dismiss the notion that the primary results, particularly in New York, signal a move away from progressivism and toward the center in the party’s politics. Wiley, a lawyer and activist, pointed to primary wins by progressives for such offices as city comptroller and Manhattan district attorney, and to a strong showing by women in City Council primaries.

“That’s what is moving forward in this city,” Wiley said, “and anyone who claims otherwise is simply spinning a narrative, rather than focus on pulling us all together to say what solves our most pressing problems.”