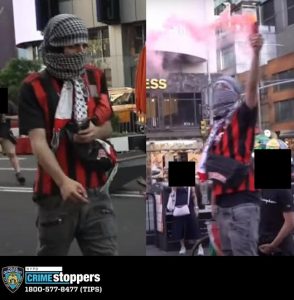 Police have arrested Mohammed Othman, 24, of Staten Island, and charged him in connection an antisemitic hate crime that occurred Thursday May 20.

Othman was accused of throwing an explosive device out of a moving truck  at 37 West 47th Street while being driven through the Diamond District, injuring a 55-year-old woman. She was taken to the hospital with burns and was released soon after being treated. The vehicle Othman was riding on was part of a caravan driving through the area with men carrying the Palestinian flag and wearing scarves and colors associated with Palestinians.

Allegedly, someone in the vehicle shouted something offensive and antisemitic as Othman threw the firework.

The hate crime in the Diamond District took place and a few hours a few streets away from where Joseph Borgen, 29, was assaulted by a gang in front of 1604 Broadway in Times Square. An unnamed 14-year-old minor, Faisal Elezzi, 25, Mahmoud Musa, and Waseem Awawdeh, both 23 have all been charged with assault in connection to the hate crime.