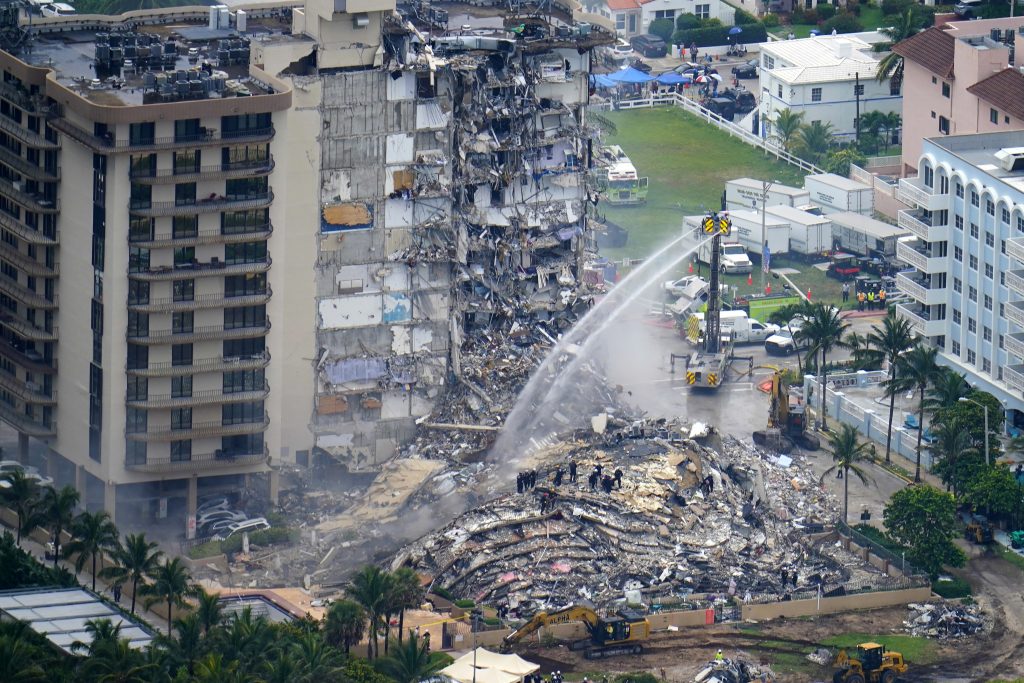 Weeks before a Florida condo building collapsed, the president of its board wrote that structural problems identified in a 2018 inspection had “gotten significantly worse” and owners needed to pay a hefty price to get them fixed.

The April 9 “Dear Neighbors” letter from Champlain Towers South Condominium President Jean Wodnicki hinted at an ongoing debate over the repairs and a reluctance by some condo owners to pay for major work that would cost at least $15.5 million.

“A lot of this work could have been done or planned for in years gone by. But this is where we are now,” she wrote in the letter, which was confirmed to The Associated Press by a spokesman for the condo board.

Wodnicki noted costs had increased since an October 2018 report by engineering firm Morabito Consultants first identified key issues with weakening concrete, and she predicted they would only grow more if put off any longer.

“Indeed the observable damage such as in the garage has gotten significantly worse since the initial inspection,” Wodnicki wrote. “The concrete deterioration is accelerating.”

“It is impossible to know the extent of the damage to the underlying rebar until the concrete is opened up. Oftentimes the damage is more extensive than can be determined by inspection of the surface,” she wrote.

She added, “I acknowledge that we are talking about a huge project and a very large assessment. The longer we wait, the higher the bids will be.”

Wodnicki did not immediately respond to phone, email and text messages seeking comment about the letter, which was first reported by USA Today and The Wall Street Journal.

Just over two months later and with bids for the work still pending, the 12-story Champlain Towers South building in Surfside came tumbling down early last Thursday. While the structural problems from the 2018 inspection have come under intense scrutiny, no definitive cause has been identified for the collapse that has left at least 11 people confirmed dead and more than 150 unaccounted for.

The Morabito report focused attention on the pool deck, which was found to have waterproofing underneath that had failed and had been laid flat instead of sloping to drain off water. This threatened not only the concrete slab under the pool but also other concrete structural areas.

The inspection was an early part of a process mandated by Miami-Dade County that all buildings undergo recertification — which would include any necessary repairs — once they reach 40 years of age. Champlain Towers South was completed in 1981.

Just a month after Morabito presented his findings in 2018, a Surfside building official assured board members that the building was “in very good shape,” according to minutes from that meeting.

The condominium association pegged the total repair and restoration cost at $16.2 million — counting items added since the 2018 Morabito inspection — that would be defrayed in part with about $707,000 the association had in cash on hand. That left the owners with a bill of $15.5 million, with individual assessments ranging from $80,000 for a one-bedroom unit to more than $300,000 for a penthouse.

“For those who believe we are assessing too much, this shows that we are actually under-assessing a bit, according to estimates,” Wodnicki wrote.

The letter also shows that, in April, a bid package for the major concrete and waterproofing work was still being discussed. The plan was to open those bids on June 8, but it’s not clear from documents released to date whether that happened.

The bill for the repairs was a big topic of conversation among residents.

“A lot of people were complaining, especially the old people living there,” said condo owner Rosalia Cordaro, who was in New York when the building collapsed. “It was a lot of money. I was complaining.”

Another owner said the assessment was the talk of the pool when she last visited a week before the collapse.
“It was the theme of most of our conversations,” said Nieves Aguero. “‘Are you going to pay it? Are you going to refinance?'”

“The number kept getting bigger, bigger and bigger,” said owner Alfredo Lopez, adding that the board did a good job of communicating and keeping the process transparent.

“A lot of people were unhappy with the upcoming assessment, but we all had the same goal of protecting our building, protecting our investment,” Lopez said.