Changing of the Guard in Washington 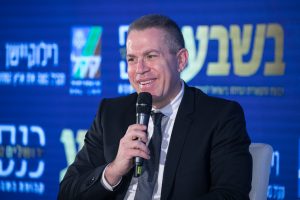 Israel’s ambassador to the United States, Gilad Erdan, is leaving. But it’s not known yet who will be arriving in Washington to replace him.

Erdan, an appointment of former Prime Minister Binyamin Netanyahu‏‏, announced his departure on Sunday, a not unexpected decision as the Bennett-Lapid government seeks to put its own people in key positions.

Erdan will continue in his post when a successor is appointed, until the end of November at the latest.

Aaron David Miller, senior fellow at the Carnegie Endowment for International Peace, was quoted by Haaretz as saying that the next envoy should be “someone who’s committed to restoring trust and restoring badly frayed bipartisanship in U.S.-Israeli relations.”

Miller said he or she should also have “terrific English, great media skills, a sense of humor, and the emotional intelligence to understand just how much damage was done to the U.S.-Israeli relationship by Israel in the last four years.”

Although Erdan did make attempts to reach out to Democrats, he did not seem to have much success in improving the bipartisan consensus on Israel. But at least he signaled a change from his predecessor, Ron Dermer, who was regarded as a pro-Republican emissary for Netanyahu.