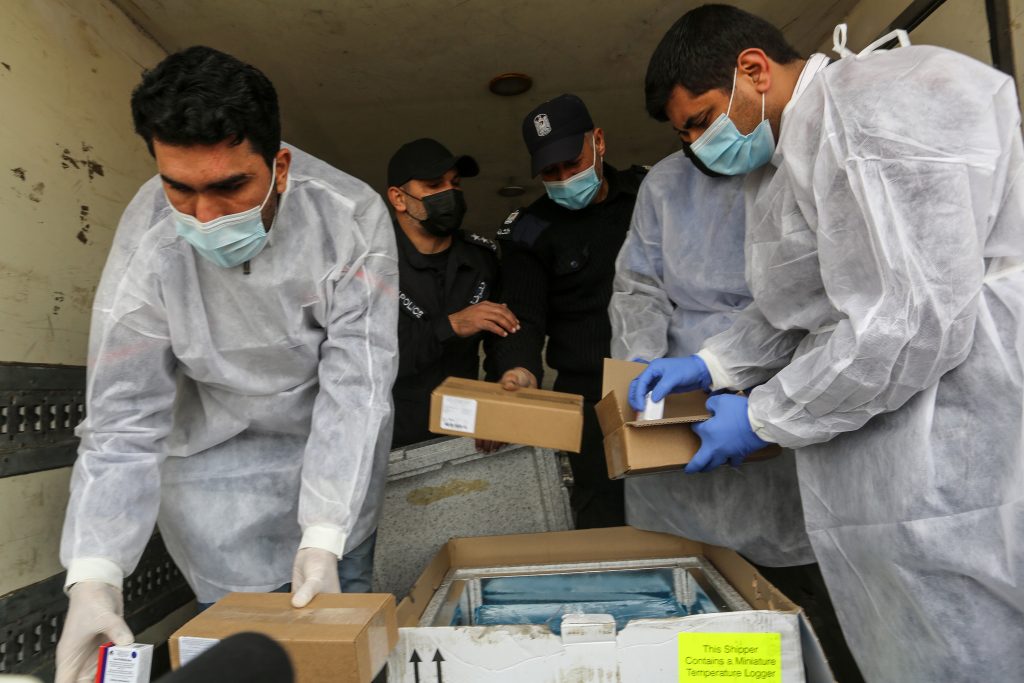 Palestinian groups on Sunday demanded the establishment of an independent commission of inquiry into Israel’s transfer of Pfizer covid vaccines to the Palestinian Authority.

This comes in the wake of a blowup over the fact that the doses in the million vaccine shipment were soon to expire. After initially accepting the delivery, they decided to refuse it. Israeli officials insisted that the PA knew of the expiration date beforehand, and that the vaccines were perfectly safe to use.

The Palestinian Coalition for Accountability and Integrity (AMAN) faulted the PA for its handling of the matter:

“It is the responsibility of the Palestinian government, represented by the Ministry of Health, to announce the details of the deal before concluding it, in order to enhance the principle of transparency.”

“Accordingly, AMAN demands the formation of an independent investigation committee, with the participation of representatives of civil society organizations, to investigate the merits of this deal.”

Meanwhile, three countries have contacted Israel to inquire about the possibility of obtaining the vaccines, if Ramallah doesn’t want them, according to Haaretz.

Citing an unnamed diplomatic source, the paper says Israel is in touch with the countries about doses set to expire in July.

The Palestinian Authority rejected the transfer of more than a million COVID-19 vaccine doses from Israel after its health authorities determined that they “fall short of meeting the technical criteria,” PA Health Minister Mai al-Kaila said in a press conference late Friday, following Palestinian public criticism.

The announcement came after Israel delivered a first shipment of 100,000 Pfizer COVID-19 vaccine doses to the PA, within hours of the Israeli government’s announcement of the vaccine exchange agreement.

Israel said it would supply up to 1.4 million doses of the vaccine immediately to the PA, and in September or October, when the doses purchased from Pfizer by the PA are due to arrive, the same number of doses would be returned to Israel.

The exchange deal would allow a large number of Palestinians to be vaccinated months earlier than planned.

However, after some of the vaccines had already been transferred to Palestinian possession, Prime Minister Mohammad Shtayyeh announced late Friday that he was canceling the shipment because they are expiring soon.

Israel, however, said it had given the Palestinians that information.

The PA’s reversal was taken after many Palestinians criticized the PA government over the deal with Israel, largely because the doses were about to expire. They called on the government to cancel the agreement.

The Israeli Health Ministry said on Motzoei Shabbos that “the COVID-19 vaccines we gave the Palestinian Authority were perfectly valid. The expiration dates were known to the PA and everything was agreed upon in advance. The Palestinians received the same vaccines that are currently given to Israelis.”

Already on Thursday, before any formal announcement was made, the PA reportedly held issue with two conditions surrounding the transfer of the vaccines, one of which was that the agreement would not be signed under the “State of Palestine” and the second was that the vaccines would not be transferred to the Gaza Strip. “Yesterday, we informed the Israelis that we were giving up all vaccines because they had agreed not to supply some of them to Gaza,” the Palestinian health minister said Friday. “Today, they came back to us and agreed.”