National Anthony Fauci’s Pandemic Emails: ‘All is Well Despite Some Crazy People in This World’
CoronavirusNational 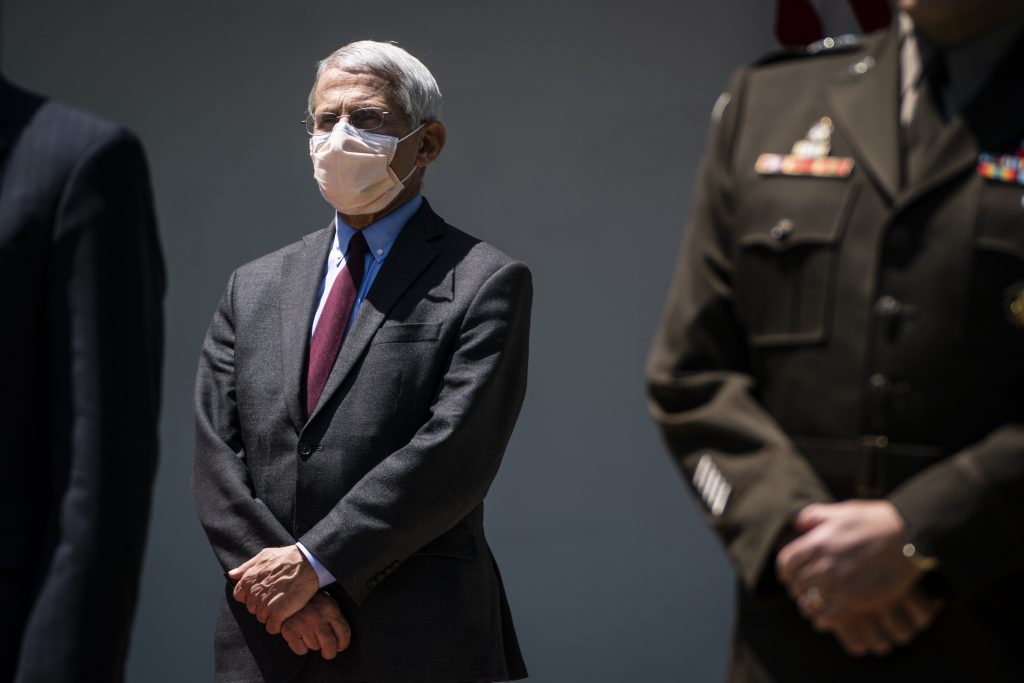 As the coronavirus pandemic engulfed the world last spring, Science magazine quoted a top Chinese health official saying that the United States and other Western nations were making a “big mistake” by not telling people to mask up.

The official, George Gao, worried that the comment might upset his longtime friend Anthony Fauci, Washington’s leading expert on infectious diseases. So amid the deepening crisis, Gao reached out to clear the air.

“I saw the Science interview, how could I say such a word ‘big mistake’ about others? That was journalist’s wording. Hope you understand,” Gao, director of the Chinese Center for Disease Control and Prevention, wrote to Fauci in a March 28 email. “Lets work together to get the virus out of the earth.”

“I understand completely. No problem,” Fauci wrote back. “We will get through this together.”

The previously unreported exchange was among 866 pages of Fauci’s emails obtained by The Washington Post as part of a Freedom of Information Act request. The correspondence from March and April 2020 opens a window to Fauci’s world during some of the most frantic days of the crisis, when the longtime director of the National Institute of Allergy and Infectious Diseases was struggling to bring coherence to the Trump administration’s chaotic response to the virus and President Donald Trump was seeking to minimize its severity.

Fauci’s actions during that period and beyond remain an intense focus for many Americans and political leaders. Now serving his seventh president, Fauci, 80, is helping to craft President Joe Biden’s pandemic strategy, and many Republicans accuse him of playing a key role in Trump’s loss in the November election.

During daily televised briefings at the White House, Fauci emerged as an at times reluctant – and polarizing – media star: To Trump supporters, he was a contrarian who seemed to undermine the president at every turn, while others viewed him as a reassuring voice of reason. The emails show that he was inundated with correspondence from colleagues, hospital administrators, foreign governments and random strangers – about 1,000 messages a day, he says at one point – writing to seek his advice, solicit his help or simply offer encouragement.

The medical director of the National Football League Players Association asked Fauci for a confidential briefing on how to safely start the next NFL season. A documentary filmmaker working on a forthcoming Disney-backed biopic asked to ride along as Fauci drove to work. An adviser to Microsoft co-founder Bill Gates expressed concern about Fauci’s health. And a senior House Republican told Fauci to “keep being a science truth teller” despite skepticism about the virus from other GOP lawmakers and Trump himself.

“I was getting every single kind of question, mostly people who were a little bit confused about the mixed messages that were coming out of the White House and wanted to know what’s the real scoop,” Fauci said in a recent interview. “I have a reputation that I respond to people when they ask for help, even if it takes a long time. And it’s very time consuming, but I do” respond.

The released emails show that Fauci indeed tried to answer many queries, sometimes hitting “send” well after midnight. And even as Trump ratcheted up attacks on China for not containing the virus after it was first discovered there, Fauci sought to maintain ties with Gao, a well-regarded Chinese scientific leader – and Gao with him.

After Fauci faced threats from Trump supporters who blamed him for supporting social distancing rules that closed schools, tanked the economy and threatened Trump’s reelection prospects, Gao, a member of the U.S. National Academy of Sciences, emailed again.

“I saw some news (hope it is fake) that [you] are being attacked by some people. Hope you are well under such a irrational situation,” Gao wrote on April 8.

“Thank you for your kind note,” Fauci replied three days later. “All is well despite some crazy people in this world.”

Threats from the “crazy people” would lead U.S. officials to assign Fauci a full-time security detail. On April 26, he received an email from Freddie Barnes, a military veteran and chaplain with North Carolina’s Department of Public Safety writing “to express my profound appreciation to you for your work during the COVID-19 pandemic.”

“I especially appreciate how you have spent considerable time and capital reaching out to the Black and brown communities,” Barnes wrote. “For you to be intentional about keeping minority communities in the loop is commendable, especially since these communities will be absorbing the disproportionate share of sicknesses and deaths coming from COVID-19.”

He ended the email with a warning: “Take care and ‘Cover your six’ ” – military slang for “watch your back.”

On April 14, 2020, a day when nearly 3,000 Americans would die of covid-19, the disease caused by the virus, Fauci received an earnest list of questions from a senior official in the Office of the Surgeon General in the Army and U.S. Army Medical Command.

“You are the voice of reason for millions of concerned citizens,” wrote the official, whose name was redacted in the released emails. A list of questions followed: Can the virus be contracted from a corpse? Can someone who has taken hydroxychloroquine for years contract the virus? Are masks and gloves truly effective?

Finally: “What keeps you up at night, regarding COVID-19?”

Fauci forwarded the email to some of his top advisers and asked for help crafting a response. He replied a few days later.

In the early days of the pandemic, everyone, it seemed, wanted a piece of Fauci. Numerous organizations wrote to offer awards and honorariums. PayPal wanted the doctor to speak to its 23,000 employees. Michael Milken, chairman of the Milken Institute, a California-based think tank, wanted Fauci to appear on his podcast. Anthony Foxx, President Barack Obama’s transportation secretary, wanted advice for the travel industry.

Italian media outlets constantly asked for interviews. One person wanted Fauci to co-write an op-ed. (“How do we nicely say no to this person?” Fauci asked his staff.)

One email said that Robert Iger, executive chairman of the Walt Disney Co., was immensely supportive of a documentary about Fauci that would feature footage discreetly shot as the doctor went about his pandemic duties. The film is set to be released later this year.

The NFL Players Association also came calling. Thom Mayer, the NFLPA’s medical director, emailed Courtney Billet, one of Fauci’s top aides, on April 4 and said he had asked that “we stand up a joint NFLPA-NFL Task Force . . . with a view towards if and when we might look towards an NFL season, even if games are played with no fans.”

“My request is to have Dr. Fauci give a telephone briefing to our group on this difficult topic, which would of course be confidential. The floor would be his and I could brief him prior to the call on what we have been working on,” Mayer wrote. He suggested the week of April 13 – “although of course the modeling shows that would be during the peak of the outbreak.”

It is unclear how Fauci immediately responded; his email to an aide about Mayer’s request is redacted. Fauci did confer with the NFL and other sports leagues about their seasons, he said. But he was not wholly enthusiastic: In a May interview with NBC’s Peter King, Fauci said it was impossible to know whether the NFL season could be salvaged.

“The virus will make the decision for us,” Fauci said, a comment that enraged Trump.

On another occasion, an official at the Department of Health and Human Services suggested that the shortage of personal protective equipment could be solved by using “doggie cones.” Fauci sent a polite thank you.

On April 1, the emails show, Fauci spoke by phone with Gates about a global vaccine effort. The doctor said he was “enthusiastic about moving forward on a collaborative and hopefully synergistic approach to COVID-19” involving federal health agencies and the Bill and Melinda Gates Foundation, according to the emails.

Gates quickly relayed the conversation to Emilio Emini, a top foundation executive who was tasked with coordinating vaccine efforts. Emini immediately emailed Fauci – and raised concerns about the doctor’s health.

“I see you on TV almost every day, and although you continue to have considerable energy, I am seriously worried about you,” Emini wrote. “The nation and the world absolutely need your leadership.”

Fauci wrote back at 1:53 a.m., saying, “I will try to engage as much as I can given my current circumstances.”

In an interview, Fauci said he has had a long-standing relationship with Gates, whose foundation focuses on global vaccine access, among other issues. He said that he and Gates talk about every two weeks and that they have remained in touch about how to get coronavirus vaccines to the rest of the world.

On April 10, Rep. Fred Upton, R-Mich., emailed Fauci a question about hydroxychloroquine, a drug Trump was aggressively pushing as a treatment for the coronavirus despite scant evidence of its efficacy. The drug is used to treat lupus, and Upton asked whether anyone with that disease had contracted the coronavirus.

The next day, Fauci wrote back that the answer was “almost certainly yes” but that there was not enough data to make any final conclusions. Their electronic rapport intensified when Upton, a moderate and one of 10 House Republicans who voted to impeach Trump after the Jan. 6 Capitol insurrection, tried to explain why some of his colleagues were trying to block more money for the U.S. pandemic response.

“Keep being a science truth teller,” Upton urged Fauci in another email.

“Thanks, Fred. I appreciate your note.”

Although Fauci often accepted praise for challenging the president, the released emails do not show him directly criticizing Trump. On several occasions, the emails show Fauci and White House officials staying in close contact.

Near midnight on April 11, the day before Easter, Marc Short, Vice President Mike Pence’s chief of staff, emailed Fauci about some apparent crossed wires. “You correctly noticed the symptoms but misdiagnosed the root cause,” Short wrote in a heavily redacted email that closes: “Apologies for a poor poker face.”

At the time, Trump was anxiously trying to reopen the economy despite Fauci’s reluctance. Less than 13 hours after receiving Short’s email, Fauci responded: “Thanks for the note. Understood. I wish you a peaceful and enjoyable day with your family.”

At times, Fauci grew bewildered by the public fascination with him, the emails show. On March 31, a colleague at the National Institutes of Health sent Fauci an article from The Post with the headline, “Fauci socks, Fauci doughnuts, Fauci fan art: The coronavirus expert attracts a cult following.”

“Truly surrealistic. Hopefully, this all stops soon,” Fauci replied. In another note, he added: “It is not at all pleasant, that is for sure.”

When a White House news briefing was canceled one day – freeing Fauci from a TV appearance – he sent his staff a message with two smiley-face emoji.

Most of the emails were deadly serious, however. In one exchange, a former acquaintance who described himself as “just a working class guy” who once drank beers with Fauci in Boulder, Colo., urges the doctor to “stand up to power and speak the harsh truth to the people of this country.”

“The leadership from the top is utterly lacking and incompetent and dangerous to the American people. . . . We need a unified and professional federal response to this unprecedented crisis,” the man wrote. “My dad was born during the first worldwide modern pandemic, and I don’t really want to see him leave from this current one.”