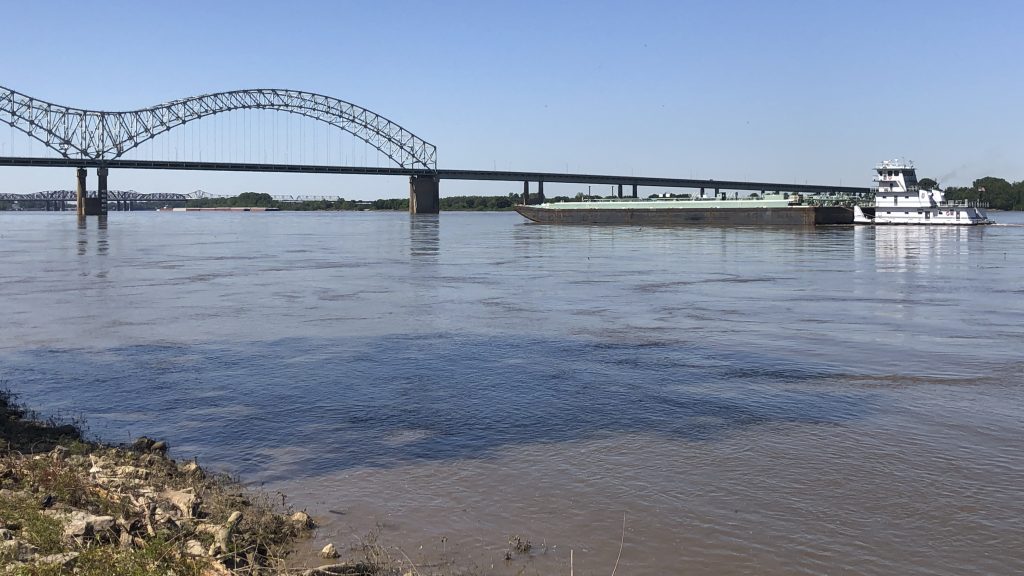 River traffic has reopened on the Mississippi River near Memphis, Tennessee, three days after it was closed when a crack was discovered in the Interstate 40 bridge that connects Tennessee and Arkansas, the U.S. Coast Guard said Friday.

The Arkansas Department of Transportation, meanwhile, said a video taken by an inspector two years ago found “significant rust and the beginning of a crack” in the same area as the fracture that prompted the bridge’s shutdown this week.

More than 45 tug boats hauling about 700 barges had been idled along the river south and north of the bridge, waiting for clearance. Now they can cross under the Hernando De Soto Bridge, Petty Officer Carlos Galarza told The Associated Press.

Economic development officials had been concerned that an extended closure of river traffic could hurt the region’s economy and have ripple effects on the nation’s supply chain.

The bridge itself will remain closed to vehicles indefinitely, with road traffic rerouted to Interstate 55 and the 71-year-old Memphis & Arkansas Bridge, about 3 miles south.

River traffic under the six-lane bridge was shut down Tuesday after inspectors found a “significant fracture” in one of two 900-foot horizontal steel beams that are crucial to the bridge’s integrity, said Lorie Tudor, director of the Arkansas Department of Transportation.

Engineers wanted to ensure the bridge could stand on its own before reopening river traffic.

“Based on information provided to us by the Tennessee Department of Transportation, the Coast Guard has determined that transit under the I-40 bridge is safe for maritime traffic,” Coast Guard Capt. Ryan Rhodes, captain of the Port of Memphis, said in a statement.

The Arkansas Department of Transportation on Friday said an image captured by an inspector’s drone video in May 2019 showed evidence of damage on the lower side of the bridge, the same area as the crack that was discovered this week.

DOT spokesman Dave Parker said the damage was found by a consulting firm that was inspecting the bridge’s cables that year.

“ARDOT is now investigating to see if that damage was noted in a September 2019 inspection report and, if so, what actions were taken,” the agency said in a statement.

Negotiations are intensifying between the White House and a group of Republican senators over a potential infrastructure package. Democrats have said the shutdown highlights the urgent need for more infrastructure funding.

Republicans have called for an infrastructure plan with a smaller price tag than President Joe Biden’s and with a narrower definition of public works.

The Arkansas Trucking Association on Friday estimated the closure would cost the trucking industry at least $2.4 million a day because of the longer routes to cross the river. The group used data provided by the American Transportation Research Institute.

Arkansas Trucking Association President Shannon Newton said the trip on the I-40 bridge between the two states averaged eight minutes. Since the I-40 bridge closure, trips on the I-55 bridge being used as the closest alternate route have averaged 84 minutes.

“Even if you’re looking at 6-8 weeks, that’s an incredible expenditure that the industry can’t simply absorb,” Newton said.

In an inspection for the 2020 National Bridge Inventory report, the Federal Highway Administration said the I-40 bridge checked out in fair condition overall, with all primary structure elements sound and only some minor cracks and chips in the overall structure. Its structural evaluation checked out “somewhat better than minimum adequacy to tolerate being left in place as is.”

Arkansas transportation officials said the crack did not appear in the last inspection of the bridge, which occurred in September 2020. The bridge opened in 1973 and carries an average of about 50,000 vehicles a day, with about a quarter being trucks.

Tug boats pushing barges could be seen passing under the bridge shortly after the Coast Guard’s announcement Friday. Some onlookers came to a riverside park to get a glimpse of the huge vessels.