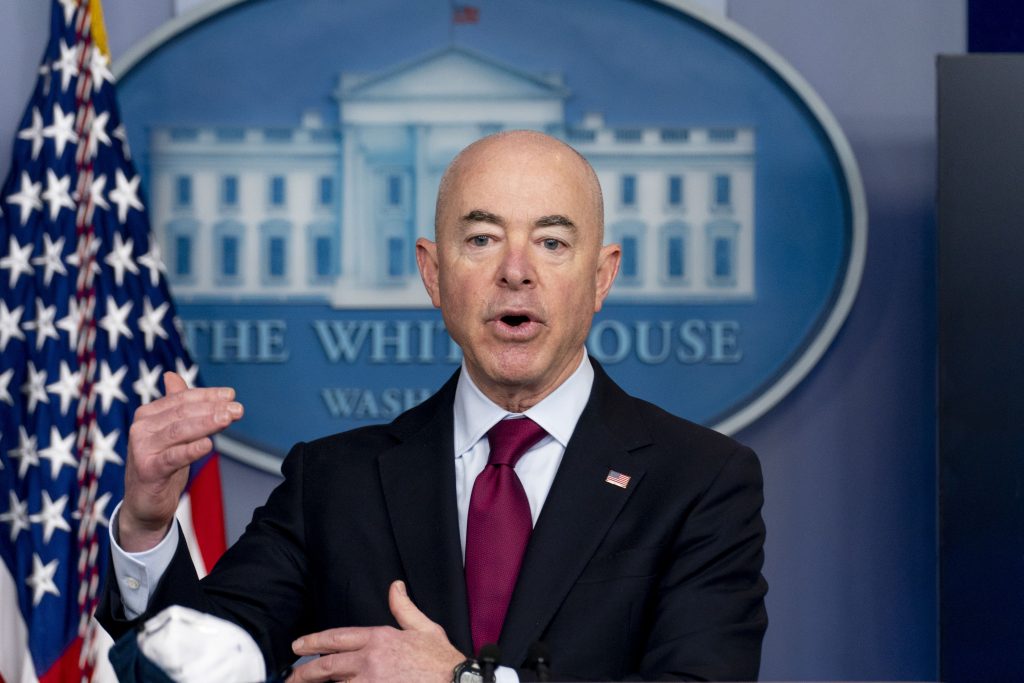 Department of Homeland Security Secretary Alejandro Mayorkas defended President Joe Biden’s immigration strategy and emphasized in interviews Sunday that the U.S.-Mexico border “is closed” as the Biden administration faces criticism over a record number of migrants seeking entry into the country from Mexico and Central America.

Mayorkas, who appeared on almost all of the major political shows Sunday morning, sought to push a consistent message as the Biden administration is being pressed about conditions in overcrowded detention centers for unaccompanied immigrant children.

“The border is closed. We are expelling families. We are expelling single adults,” Mayorkas said on NBC’s “Meet the Press” on Sunday, adding that unaccompanied minors should not attempt to make any journey to the U.S.-Mexico border now. “We strongly urge, and the message is clear, not to do so now. I cannot overstate the perils of the journey that they take.”

Mayorkas said the administration’s “message has been straightforward and simple,” and Biden last week disputed that the surge was a result of his overturning some of former president Donald Trump’s policies. But the message coming from the administration has at times been conflicting, particularly Mayorkas’s message that asylum seekers should not come “now” while other members of the administration have said they should not come period, and seek asylum from where they are. That has frustrated even some of their Democratic allies steeped in immigration issues.

Arizona Gov. Doug Ducey, a Republican, blamed Biden for changing or doing away with Trump policies including “remain in Mexico,” which under the previous administration meant asylum seekers needed to wait outside of the U.S. for their cases to be decided.

“It was working. It disincentivized people from taking this dangerous trip,” Ducey said of the policy on ABC’s “This Week.”

Republicans have blamed Biden’s rollbacks for the rise in migrants arriving, saying he changed Trump’s policies prematurely and without backup systems in place. Democrats have emphasized that they are attempting to take a more humane approach to immigration.

Mayorkas on Sunday reiterated that the Biden administration would not “expel into the Mexican desert” young, vulnerable children like the last administration did.

He also blamed Trump for dismantling processes such as the Central American minors program, which laid out an “orderly, human and efficient way of allowing children to make their claims under United States law in their home countries.” It would take time to rebuild such processes, he said repeatedly.

“I think we are executing on our plans. And quite frankly, when we are finished doing so, the American public will look back on this and say we secured our border and we upheld our values and our principles as a nation,” Mayorkas said.

Ducey said Biden could be doing more, including working with Mexican President Andrés Manuel López Obrador to get that message across.

“He’s got a big microphone. He needs to use it appropriately,” Ducey said.

Sen. Rob Portman, R-Ohio, said on CBS’s “Face the Nation” that Mayorkas’s message would not be enough to deter the record numbers of immigrants arriving at the border.

“People are going to listen to actions and watch actions and not listen to words,” said Portman, who toured border facilities last week. “I spoke to single individuals who are coming over at night, men who told me that they’d heard what President Biden said and they were coming anyway because they could make a lot more, 10 times more in the United States.”

Rep. Michael McCaul, R-Texas, predicted that there would be one million people trying to get into the United States by summertime.

“The traffickers are smart, cartels are smart. They know our laws, policies,” McCaul said on ABC’s “This Week” on Sunday. “The messages coming back that, hey, we got a new president. Come on in. We’re open for business to the traffickers.”

One point of bipartisan agreement is that the issue is increasingly urgent. Democratic and Republican lawmakers have recently sounded the alarm over “significant overcrowding” at migrant detention facilities. The Washington Post reported Saturday that there are more than 15,000 unaccompanied migrant children in the care of the Department of Health and Human Services and of Customs and Border Protection. Biden this month deployed the Federal Emergency Management Agency to help care for the influx of children arriving at the border.

On “Fox News Sunday,” Mayorkas said the Biden administration is working with Mexico to improve the country’s capacity to receive families expelled from the United States.

He also said that the pandemic was preventing greater press access at the border – under criticism that the Biden administration was not being transparent about the conditions at border facilities – and that “we are in the midst of a pandemic, and we’re focused on operations and executing on our plans.”

Mayorkas did not comment on reports of migrants testing positive for the coronavirus, which can cause the illness covid-19, but he said minors arriving are tested, isolated and quarantined, and that pandemic policies are operated “very efficiently.”