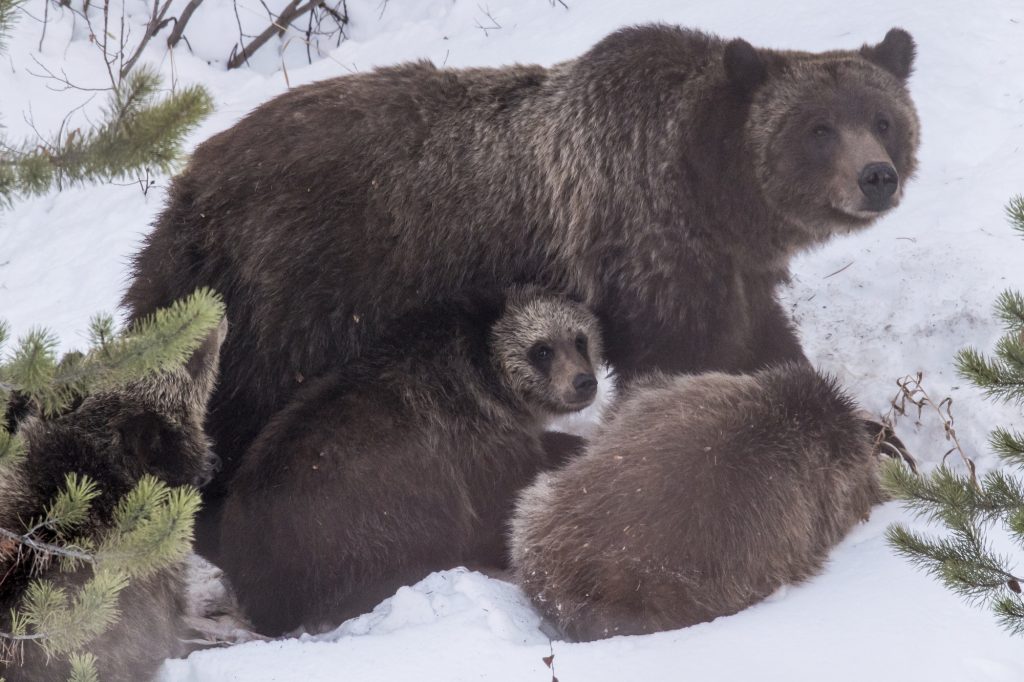 On a Friday afternoon last October, game warden Brian DeBolt and federal special agent Steve Stoinski drove to the Solitude Subdivision in response to a report of a resident feeding grizzly bears.

Arriving at the home in the neighborhood near Jackson Hole Airport, the law enforcement officers immediately saw evidence confirming the allegations. Grizzly 399 and her four cubs were in the yard as they pulled up.

DeBolt, with the Wyoming Game and Fish Department, and Stoinski, with U.S. Fish and Wildlife Service, watched as a woman standing in the yard talked on a cell phone. She appeared “very excited” about the famous grizzly family’s presence, the officers reported, according to documents obtained by the Jackson Hole News&Guide through a records request.

The five bears, meanwhile, stood clustered near a deck, eating molasses-enriched grain from a black tub and out of hollow stumps of wood. “Numerous” birds and squirrels joined in feeding “right alongside” the bears at the scene, the officers observed.

As the resident approached the grizzlies famously habituated by their upbringing in Grand Teton National Park, she greeted them by saying: “Hi babies, hi babies!”

Concerned for her safety, the officers asked her to not move any closer, the News & Guide reported.

“Oh come on!” the woman retorted. “You people are a bunch of (wimps).”

The woman later told officers she had “an aura” that both allowed her to communicate with animals and also prevented her from being hurt or attacked. But if she was attacked, she told them she was “OK” with being killed.

Both inside and outside the home, the officers gathered photographic, audio and video evidence of the grizzlies eating grain, a potential violation of the Endangered Species Act.

As the conversation at the Solitude Subdivision residence progressed, the officers recorded the woman in denial of putting out molasses-enriched grain, even while they watched the grizzly family eat the pellets.

“I never really noticed it,” she told DeBolt and Stoinski.

Any feed that had been put out, the woman told them, was for moose. That grain, she said, was even medicated to help treat what she described as conjunctivitis.

This exchange appears to have doomed the investigation.

Feeding moose in Wyoming is legal, although it’s discouraged by biologists and is technically prohibited both through Teton County’s planning and zoning regulations and the Solitude Subdivision homeowner’s association ordinances.

Six weeks later, an assistant attorney at the U.S. District Court of Wyoming discussed the case with someone in the criminal division. The attorneys concluded they would have a “difficult time convicting” the Jackson Hole resident of feeding grizzlies because she stated she placed feed for moose, and not the bears. With that, the U.S. Attorney’s Office declined to prosecute. Absent violations of state law, they recommended the case be closed.

The plight of DeBolt and Stoinski’s case highlights the difficulty of prosecuting and stopping backyard wildlife feeding in Wyoming, where the state legislature has declined on multiple occasions to criminalize an activity that’s often condemned by wildlife managers.

Rep. Andy Schwartz, a Teton County Democrat, has attempted to pass a state law banning such wildlife feeding. He last introduced a bill when the Wyoming Legislature convened in 2016. That bill did not make it out of committee because conservative Republican lawmakers were not interested in infringing on people’s private property rights, Schwartz told the News&Guide.

Ordinarily, animals being fed are species like deer and moose, which lead anonymous lives in the wild. In this case, the animals being fed include those little-known individual ungulates. But now they also include a family of grizzly bears that has amassed a global fame.

Although it’s discouraged in Wyoming and illegal in many states, wildlife feeding can become a way of life for its most ardent practitioners. Backyard feeding becomes a daily routine and significant financial investment for folks who are convinced that they’re acting in the animals’ best interests.

Game and Fish Regional Supervisor Brad Hovinga said that, short of wildlife feeding being criminalized in the state, his staff’s hands are tied.

“Like any other wildlife feeding operation in the county, we don’t have any authority to do anything about it,” he said. “We try to focus on education.”

Teton County, which has prohibited wildlife feeding through its land development regulations, is another governmental entity that could take enforcement action against the feeder, who has been the subject of numerous complaints. Multiple calls to the county’s code compliance officer, Josh Butteris, have not been returned.

While grizzly bears have denned for the winter, wildlife feeding at Solitude Subdivision persists.

On Tuesday afternoon, at least four moose and a mule deer now occupied the yard where Grizzly 399, her four cubs and other grizzlies have previously gorged on grain.