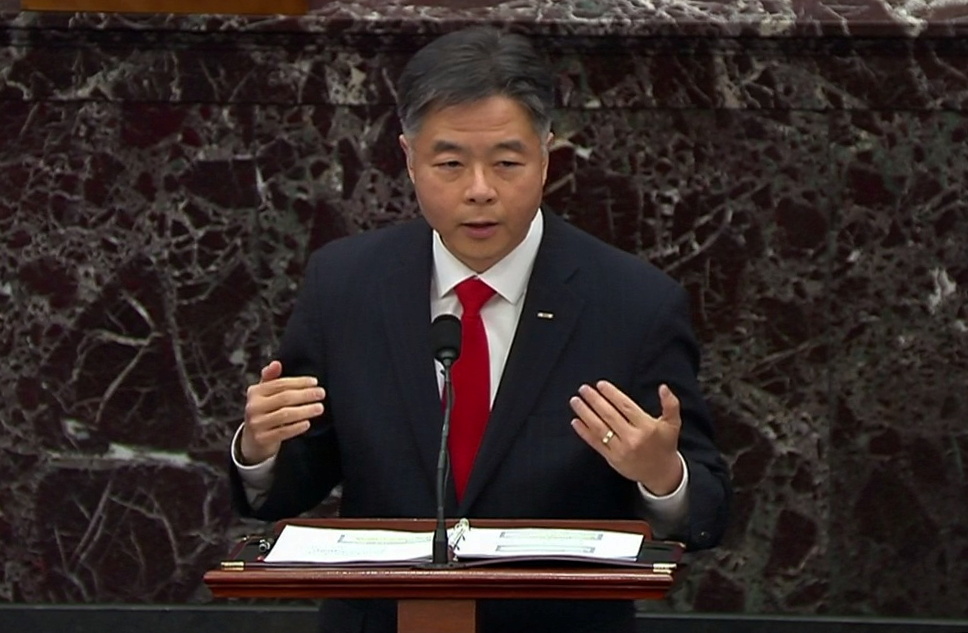 House Democrats prosecuting Donald Trump’s impeachment trial for inciting the deadly riot in the Capitol on Jan. 6 highlighted through video on Wednesday how members of the pro-Trump mob searched the building for his vice president, chanting, “Hang Mike Pence!”

Previously unseen security videos showed the view from inside the Capitol as rioters smashed windows and fought with police, coming within 100 feet of the room where Pence was sheltering with his family. The mob had set up a gallows outside.

The House of Representatives has charged Trump, a Republican, with inciting an insurrection by exhorting thousands of supporters to march on the Capitol on the day Congress was gathered to certify Democrat Joe Biden’s electoral victory.

The rioters stormed the building, sending lawmakers into hiding and leaving five people dead, including a police officer.

The security footage highlighted the fact that hundreds of Trump supporters who attacked the building in an attempt to stop the peaceful transfer of power targeted Republicans — whose votes will be needed to convict Trump.

“President Trump put a target on their backs and then his mob broke into the Capitol to hunt them down,” she said.

Trump had repeatedly said Pence had the power to stop the certification of the election results.

The Democratic House managers prosecuting the case for impeachment, an uphill task in a narrowly divided Senate, said on Wednesday that Trump planted the seeds for the riot by encouraging violence and making false claims that the election was stolen long before Jan. 6.

“Trump realized last spring that he could lose the November election and began planting seeds of anger among his supporters by saying he could lose only if it was stolen,” said Representative Joseph Neguse. “If we are to protect our republic and prevent something like this from ever happening again, he must be convicted.”

Conviction, while unlikely, could lead to a vote to bar Trump from running for office again.

Trump’s lawyers, who will have 16 hours to deliver their side of the argument after the House managers are finished, argue his rhetoric was protected by the First Amendment’s guarantee of free speech, and that the individuals who breached the Capitol were responsible for their own criminal behavior.

They also say the trial is politically motivated.

Representative Joaquin Castro cited what he called blatant acts of political intimidation against election workers in states Trump was losing. In Philadelphia, Atlanta and Milwaukee, Castro said, Trump’s supporters tried to use armed force to disrupt the counting of votes.

“The truth is President Trump had spent months calling on his supporters to march on a specific day, at a specific time, in specific places, to stop the certification,” she said.

Republican Senator Ron Johnson, a Trump ally, told reporters during a break that the proceedings would become “pretty tedious.”

“This is a political exercise,” he said.

Asked whether Republicans had received direction from Senate Minority Leader Mitch McConnell on the vote, Senator Kevin Cramer said the senators would vote their “conscience.”

In an Ipsos poll for Reuters that was released on Wednesday, 47% of respondents said Trump should be convicted, while 40% said he should not, with opinions split along party lines.

The Senate trial could conclude as early as Saturday or Sunday, according to a senior Senate aide.