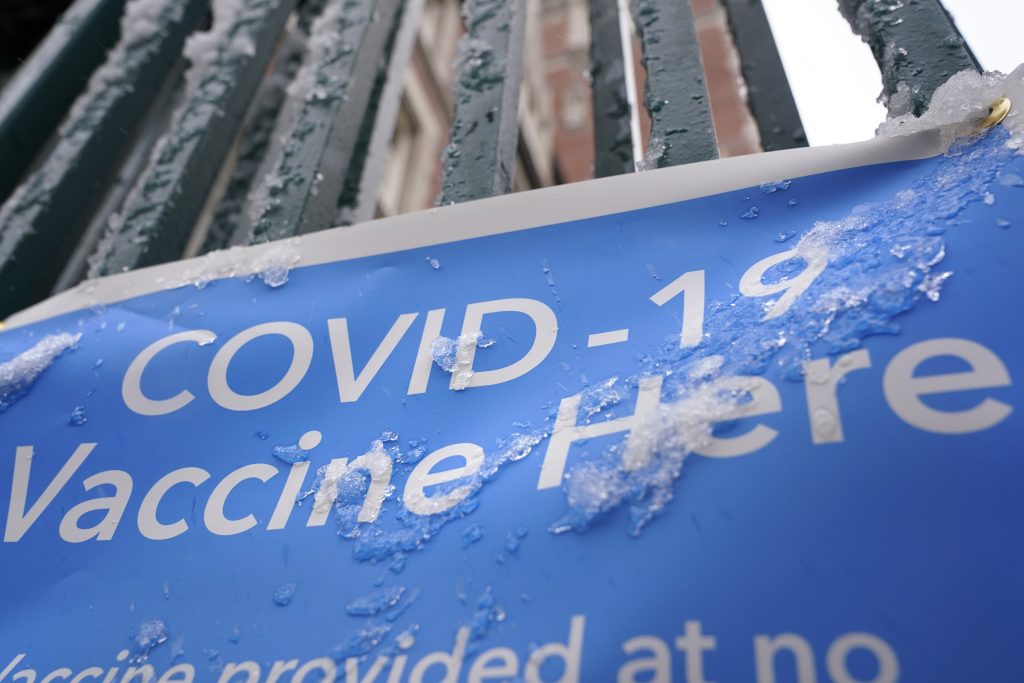 Coronavirus vaccination sites across the Northeast ramped back up Tuesday after a two-day snowstorm that also shut down public transport, closed schools and stranded travelers with canceled flights.

Some officials said that since vaccine supplies were thin to begin with, they didn’t anticipate having big problems getting caught up on distribution after a day or two of canceled appointments.

Bands of snow continued through parts of the region Tuesday afternoon, but the worst was over, with more than 30 inches (76 centimeters) in parts of New Jersey and just a few inches in Boston.

Lara Pagano, a meteorologist with the National Weather Service office in College Park, Maryland, noted that while several areas in the mid-Atlantic saw measurable snowfall for a few consecutive days, that hasn’t shattered such records.

For example, she said, the most consecutive days with measured snowfall for Washington is four, while the mark is five for New York City and six for Philadelphia.

“While this storm has been a prolonged event, it’s not a record-setter in that sense, but it does rank up there pretty high, of course,” she said.

The sprawling, lumbering storm had already walloped the eastern United States by Monday. More than 17 inches (43 centimeters) of snow dropped on Manhattan’s Central Park, and as much as 30 inches (76 centimeters) was reported in northern New Jersey.

While New York City school kids had another day of all-remote learning because of the snow, above-ground subway and train service returned early Tuesday, and a ban on certain large trucks on state highways was lifted. Some vaccination sites in the city remained closed, but others, including those run by the public hospital system, were open Tuesday.

High tide caused flooding early Tuesday in coastal areas of Massachusetts, where the storm had already disrupted the second phase of the state’s vaccine rollout as a Boston site that was supposed to open Monday for residents ages 75 and older did not. However, some other mass vaccination sites remained open.

Several areas of Massachusetts were hit with 18-plus inches (45 centimeters) of snow, including the central Massachusetts communities of Fitchburg, Lunenburg and Ashburnham.

“For the next couple of weeks, the conditions are going to be phenomenal,” Gov. Chris Sununu said Tuesday during an interview on WZID-FM.

The storm raged offshore, making it inhospitable for mariners. Off the Maine coast, waves were approaching 30 feet (9 meters), and a 73-mph (117-kph) gust was recorded at an offshore buoy.

In Connecticut, the storm — which dumped up to 19 inches (48 centimeters) of snow in some areas — forced the cancellations of 10,000 vaccination appointments Monday, state officials said. Efforts are underway to provide vaccinations by the end of the week to people whose appointments were canceled.

The New Jersey State Police reported that as of 7 p.m. Monday, troopers had responded to 661 crashes and come to the aid of 1,050 motorists since 6 p.m. Sunday.

There was also concern about coastal flooding in New Jersey. In a social media video posted by Union Beach Police, Keyport Police Chief Shannon Torres and Capt. Michael Ferm were shown rescuing a man who was showing signs of hypothermia in his car from floodwaters.

In Virginia, four firefighters were taken to hospitals with injuries that were not life threatening after their fire truck overturned Sunday on snow-covered roads in Henrico County, The Richmond Times-Dispatch reported.

Power outages appeared to be minimal. About 5,000 customers in Massachusetts and about 3,000 in New York were without power Tuesday morning.

Pennsylvania Gov. Tom Wolf declared a disaster emergency after snowfall of up to 30 inches (76 centimeters) throughout central and eastern regions. The proclamation freed up millions of dollars for snow removal and authorized officials to request help from the National Guard.

Authorities said a 67-year-old woman with Alzheimer’s disease who wandered away from her home was found dead of hypothermia on an Allentown street Monday morning.