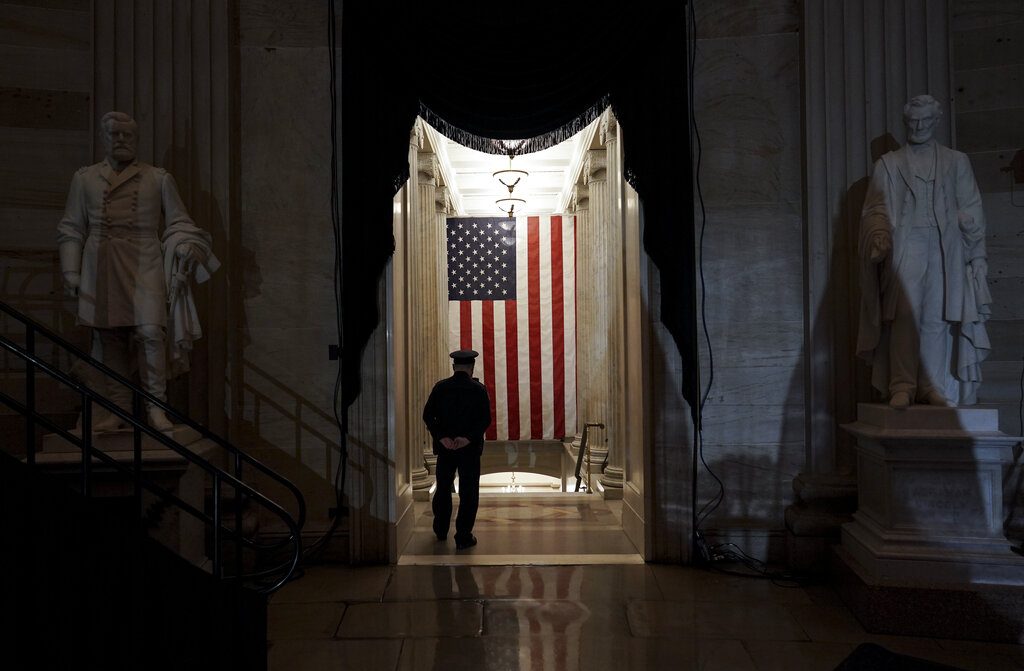 Slain U.S. Capitol Police Officer Brian Sicknick lay in honor Wednesday in the building he died defending as colleagues and the lawmakers he protected paid their respects.

Sicknick died after defending the Capitol on Jan. 6 against the mob that stormed the building and interrupted the electoral count. The U.S. Capitol Police said in a statement that Sicknick, who died the next day, was injured “while physically engaging with protesters,” though a final cause of death has not yet been determined.

Vice President Kamala Harris and her husband, Doug Emhoff, paid their respects Wednesday. A steady stream of lawmakers and police officers made its way through the Rotunda. Michigan Rep. Dan Kildee, one of several Democrats who were caught in the upper gallery of the House chamber while the rioters banged on the doors, wiped away tears.

There was a viewing period for his Capitol Police colleagues overnight, and lawmakers were to pay tribute at a ceremony Wednesday morning. A ceremonial departure for Arlington National Cemetery was planned later in the day.

Sicknick, 42, of South River, New Jersey, enlisted in the National Guard six months after graduating high school in 1997, then deployed to Saudi Arabia and later Kyrgyzstan. He joined the Capitol Police in 2008.

Like many of his fellow officers, he often worked security in the Capitol itself and was known to lawmakers, staff and others who passed through the building’s doors each morning.

There are still questions about his death, which was one of five as a result of the rioting. As the mob forced its way in, Sicknick was hit in the head with a fire extinguisher, two law enforcement officials said. He collapsed later on, was hospitalized and died. The officials could not discuss the ongoing investigation publicly and spoke to The Associated Press on condition of anonymity.

Pelosi and Schumer announced last week that Sicknick would lie in honor, saying his heroism “helped save lives, defend the temple of our democracy and ensure that the Congress was not diverted from our duty to the Constitution.”

His sacrifice, they said, “reminds us every day of our obligation to our country and to the people we serve.”

Pelosi said in a letter to colleagues on Tuesday that the Capitol Police “demonstrated extraordinary valor” on Jan. 6 and urged members to pay their respects to Sicknick.

She said protecting the Capitol and the lawmakers who work there is a “highest priority” and that there will be a need for extra money to do so. During the assault, many of the insurrectionists called out for members, including Pelosi. They also targeted Vice President Mike Pence, who was in the building to preside over the electoral count.

“The insurrectionist attack on January 6 was not only an attack on the Capitol, but was a traumatic assault targeting members,” she said.