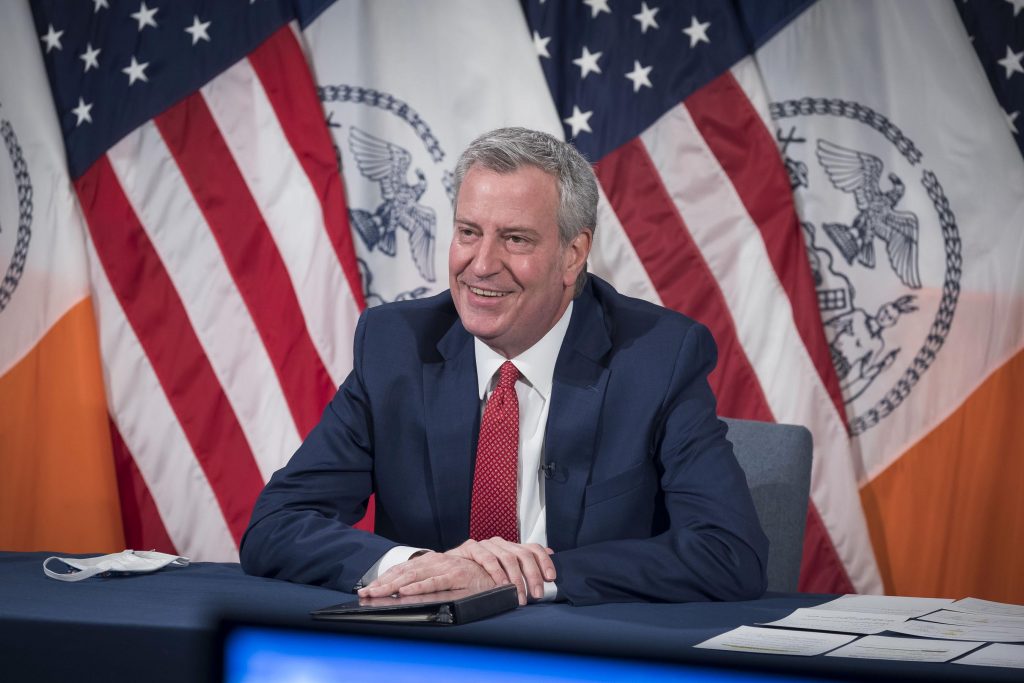 The 27 neighborhoods that New York City says were “hardest-hit” by the COVID-19 pandemic  – a list that currently doesn’t include several hard-hit Orthodox Jewish neighborhoods – will receive priority in vaccinations once the vaccines are available to the general public, Mayor Bill de Blasio said.

New York City is vaccinating according to federal and state guidelines, prioritizing health-care workers and nursing-home residents and staff. But once vaccine distribution opens to the wider public, the mayor said in response to a reporter’s question at his press conference Thursday, “the priority neighborhoods … have to be the first wave because they’re where the most people suffered, there were the most cases, there were the most deaths. By definition, that’s where you need to protect people the most.”

“Let me get this straight,” Assemblyman Simcha Eichenstein tweeted last week, “when it comes to lockdowns, Brooklyn’s Orthodox Jewish neighborhoods are considered hardest hit. Yet for vaccine distribution and relief services suddenly we’re not even in @nycgov’s top 27 neighborhoods?”

Asked at his press conference Tuesday why some hard-hit Jewish neighborhoods were not included in the list, de Blasio replied, “We’re trying to reach everyone” and that “this is clearly about going wherever the need is and working with everybody.”

“We’ve had to be really clear about the fact that the vaccine will not be distributed based on wealth or privilege, that it’s going to go where the problem has been greatest just as much as any place else, and we’re going to make it a priority to make sure there is that fairness,” the mayor said. “And that’s why we focus on the 27 neighborhoods that have borne the brunt of COVID. That’s just a matter of fairness. It’s not to exclude anyone; we’re going to be rapidly providing vaccine in all neighborhoods. It’s to make sure the places that bore the brunt absolutely get their fair share and get the priority they deserve.”

In response to a query from Hamodia on Thursday as to why neighborhoods like Boro Park, Williamburg, Midwood and Gravesend were not on the hardest-hit list, City Hall said that people in those 27 neighborhoods are likely to be people of color and below the poverty line, and have a higher prevalence of underlying issues like diabetes and hypertension, which contribute to ongoing vulnerability. City Hall also said the list was compiled in the spring, based on data from the first wave of the pandemic, and that the Orthodox neighborhoods did not experience as severe fatality rates during March and April as the 27 neighborhoods on the list.

But City Hall did not respond to Hamodia’s request for a neighborhood-by-neighborhood comparison of the fatality rates from the spring, the data set that City Hall indicated was a significant factor in determining the “hardest-hit-neighborhoods” list.

Asked at his press conference Thursday whether the city will reevaluate the list based with more up-to-date data, the mayor replied, “I think we will add. We want to look at the whole picture. I will unfortunately remind all of us that what happened in the first wave, indescribably horrible, that the second wave has been worrisome, but nowhere near what we went through in the first wave, and we got to really understand that that first wave laid bare where the vulnerabilities are and the amount of people we lost, and the fact that so much of it had to do with folks who had not had enough health care in their life historically. That’s where the danger still is. So we got to keep focused on that, but absolutely, we’re going to look at the neighborhoods and look at the priorities with all the latest data and we’ll make revisions as needed.”