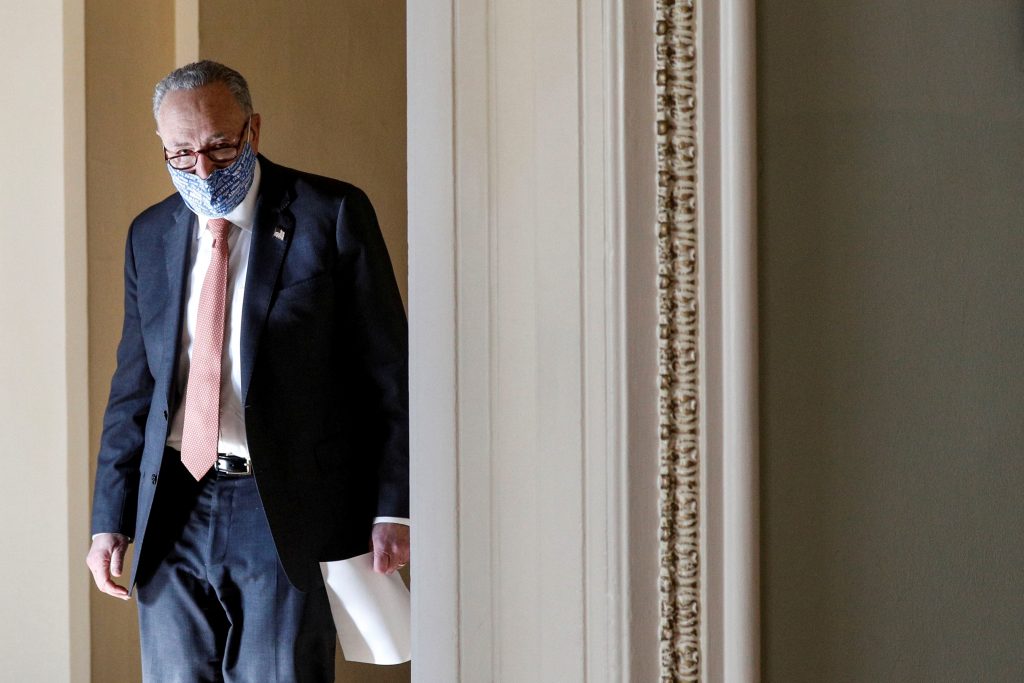 The U.S. Senate is aiming to approve some coronavirus relief before former President Donald Trump’s impeachment trial begins in early February, but Democratic Majority Leader Chuck Schumer warned a comprehensive deal may be four to six weeks away.

President Joe Biden is pushing for a sweeping $1.9 trillion response bill, but after Congress approved $4 trillion in spending to address the pandemic, including $900 billion last month, some prominent Republicans have pushed back on the idea of passing so large a bill so quickly.

“We’ll try to get that passed in the next month, month and a half,” said Schumer, whose Democrats control the 50-50 Senate thanks only to Vice President Kamala Harris’ tie-breaking vote.

“Will it be easy in the Senate? No,” he told New York City public transportation advocates. “But it’ll be a lot easier because I can determine what’s put on the floor, not (Senate Minority Leader Mitch) McConnell.”

Biden, who has aimed for the package to include $1,400 per-person payments, said on Monday he was open to negotiating eligibility requirements for the checks if it would boost support among lawmakers who want to ensure they go to the neediest people.

Schumer and McConnell – who served as majority leader for the last six years – are positioning for advantage in the divided chamber and so far have failed to agree on a power-sharing arrangement to determine how the Senate will run day-to-day operations for the next two years.

Biden has made addressing the pandemic, which has killed more than 418,000 Americans and is infecting more than 170,000 people in the United States each day, a primary initial thrust of his administration.

Earlier on Monday, Senator Angus King said the Senate was planning to consider a bill within the next two weeks, while it also moves to confirm Biden’s Cabinet ahead of the start of the Trump trial during the week of Feb. 8.

“We’re going to try to do something between now and the time of the impeachment trial beginning,” King told National Public Radio.

King and Republican Senator Bill Cassidy, who both participated in a call about COVID-19 relief with Biden administration officials on Sunday, said there is broad agreement about the need to move forward on vaccinations.

“We can all agree: we need to have money out there for vaccines,” Cassidy told Fox News on Monday. “And testing, we can accept that.”

King said there was a general consensus on Sunday’s call to do “whatever we have to do to speed up the vaccination process. I don’t think there’s going to be any debate about that.”

He added that the group on Sunday’s call would speak again on Monday or Tuesday.

The narrow margins of Democratic control in the House of Representatives and Senate mean that any legislation would need bipartisan support to become law.

House committees are expected to work on legislation this week, with the aim of being ready to put a bill on the House floor during the first week of February.