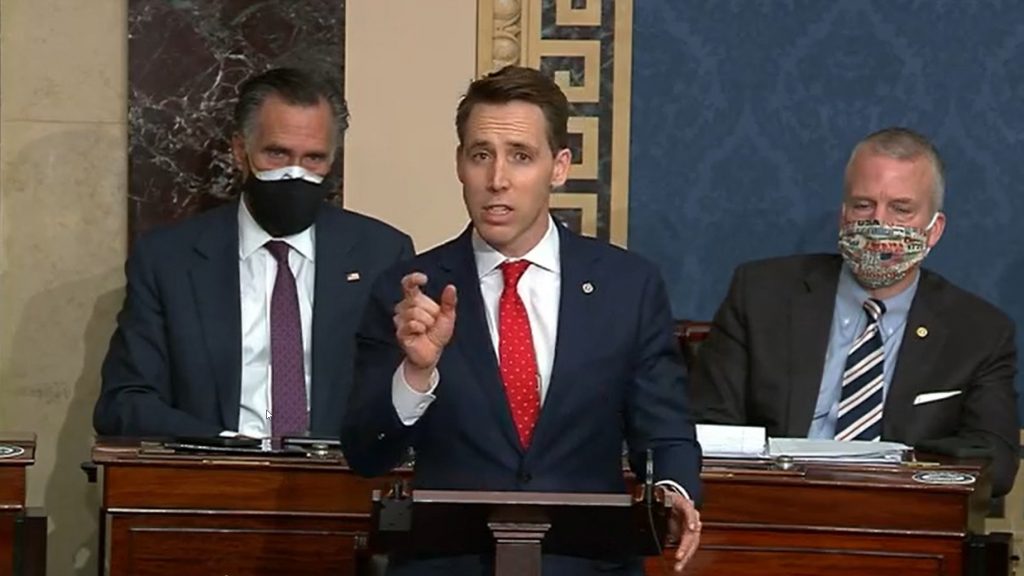 Facing an ethics complaint for his role in trying to overturn the 2020 election, Missouri Republican Sen. Josh Hawley filed his own complaint Monday against the seven Democratic senators seeking an investigation of him.

Hawley accused the Democratic senators of abusing the ethics process with their complaint against him and Texas Republican Sen. Ted Cruz related to the Jan. 6 insurrection at the Capitol.

“They submitted their meritless complaint in potential coordination with a campaign by partisan and dark-money groups that have peddled falsehoods about me and my objection,” Hawley said in his letter to the Senate Ethics Committee requesting an investigation.

“By knowingly submitting a frivolous complaint to accomplish impermissible partisan purposes, these Senators have engaged in improper conduct that may reflect upon the Senate.”

Hawley filed the complaint the same morning he appeared on the front page of The New York Post with duct tape on his mouth for a column about how corporations and Democrats are “muzzling” him for his objection to President Joe Biden’s electoral votes.

Hawley and Cruz led the effort to contest Biden’s victory in the Senate.

The initial complaint filed by the seven Democrats alleges that “they amplified claims of election fraud that had resulted in threats of violence” and by proceeding with their objections after the attack on the Capitol “lent legitimacy to the mob’s cause and made future violence more likely.”

The Democratic complaint asks the committee to consider recommendations on censure, a formal but largely symbolic reprimand, or expulsion, the process by which senators are removed from office.

Hawley’s complaint asks the committee to “take all disciplinary action that it deems appropriate” against the seven Democrats.

In his complaint, Hawley defends his decision to object to Pennsylvania’s 20 electoral votes, despite no evidence of fraud, based on his assertion that the Pennsylvania Constitution prohibits mail voting, an argument disputed by Pennsylvania officials and legal experts.

The Pennsylvania Supreme Court in December rejected a GOP-backed lawsuit filed after the election as untimely.

In his complaint, Hawley accuses the Democrats of defaming him without evidence and of undermining trust in the Senate.

“Most astonishingly, the Democrats who filed the complaint against me insinuate — without any evidence whatsoever — that I or my staff may have conspired with the criminals who stormed the Capitol,” Hawley said.

“Fabricating conspiracy theories to attack me for political purposes is bad enough. Offensively trying to tie me to Nazi antisemitism — as Senator Hirono did when she outrageously accused me of pushing ‘the Big Lie’ — is even worse,” he said.

The Senate Ethics Committee, the panel which will weigh both complaints, is led by Delaware Democratic Sen. Chris Coons, a Biden ally who was one of first senators to call for Hawley’s resignation, and Oklahoma Republican Sen. James Lankford, who initially backed Cruz’s challenge to Arizona’s electoral votes but rescinded his support after the Capitol riot.