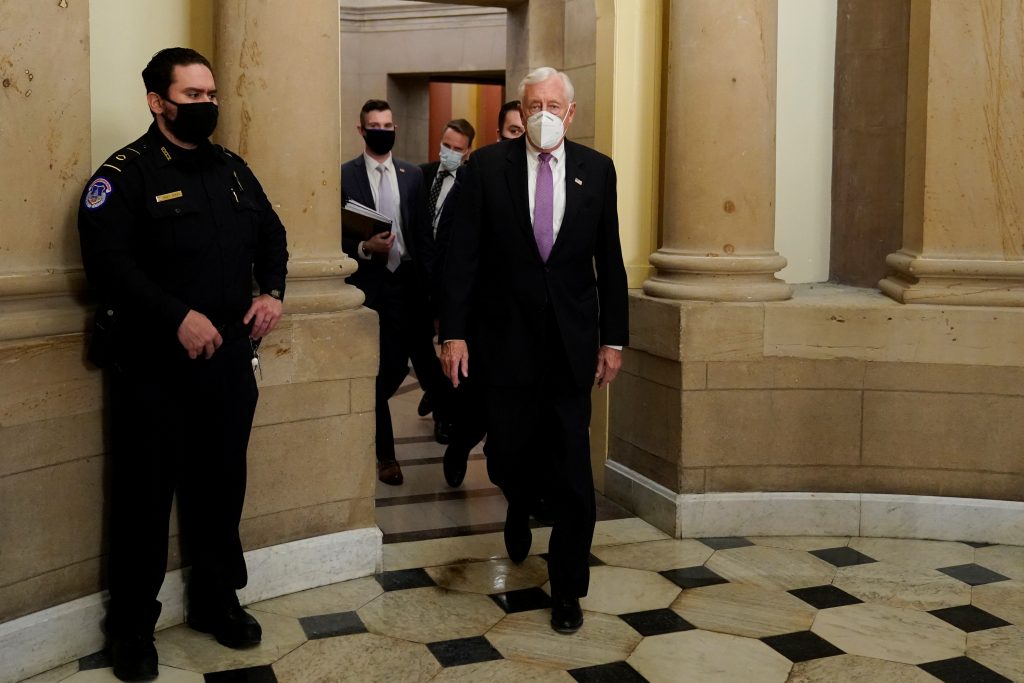 As the House of Representatives moved on Wednesday toward a vote to make Donald Trump the first U.S. president to be impeached twice, the Senate’s top Republican rejected Democratic calls to reconvene the Senate for an immediate trial, all but ensuring Trump will not be ousted before his term ends next week.

A spokesman for Senate Majority Leader Mitch McConnell confirmed on Twitter a Washington Post report that McConnell had informed the Senate’s top Democrat, Chuck Schumer, that he is not willing to bring the chamber into emergency session to consider removing Trump from office following House impeachment.

The planned House vote later on Wednesday comes a week after a pro-Trump mob swarmed the U.S. Capitol in a deadly attack shortly after the Republican president delivered a speech to thousands of supporters in which he repeated claims of an election stolen from him due to widespread voting fraud. The mob temporarily interrupted the formal certification of Democratic President-elect Joe Biden’s victory over Trump in the Nov. 3 election.

“We know that the president of the United States incited this insurrection, this armed rebellion against our common country,” House Speaker Nancy Pelosi, a Democrat, told her fellow lawmakers. “He must go. He is a clear and present danger to the nation that we all love.”

Reuters had earlier reported that Republican Senate leadership was discussing whether to initiate a trial as early as Friday, ahead of Biden’s inauguration on Jan. 20.

Trump’s supporters on Jan. 6 breached the Capitol, sent lawmakers fleeing and left five dead in their wake, including a police officer.

Pelosi said Trump has engaged in a “war on democracy,” and that the “insurrectionists” and “domestic terrorists” who stormed the Capitol were “sent here by the president.”

No U.S. president ever has been removed from office through impeachment. Three – Trump in 2019, Bill Clinton in 1998 and Andrew Johnson in 1868 – previously have been impeached by the House but were left in power by the Senate.

Republicans made speeches urging the House not to impeach Trump in the interest of promoting national healing, with some accusing Democrats of recklessness.

Lawmakers remained on edge after last week’s violence, and large numbers of National Guard troops wearing fatigues and carrying rifles were stationed outside and inside the building.

Under the U.S. Constitution, impeachment in the House triggers a trial in the Senate. McConnell has said no trial could begin until the Senate was scheduled to be back in regular session on Jan. 19, only a day before Biden is due to be sworn in.

Rep. Jim Jordan (R-Ohio), a prominent Trump ally who led his party’s opposition to the first impeachment in 2019, accused Democrats of pursuing an impeachment drive that he said began soon after Trump’s inauguration in 2016.

“Why? Politics and the fact that they want to cancel the president,” Jordan said on the House floor.

If Trump is impeached, a two-thirds majority of the Republican-led Senate is needed to convict him, meaning at least 17 Republicans in the 100-member chamber would have to find him guilty. If Trump is removed from office, Vice President Mike Pence would become president and fill out his term.

Trump’s actions have weakened his grip over his party. While no Republican senators have said they would vote to convict, two – Lisa Murkowski of Alaska and Pat Toomey of Pennsylvania – have called on Trump to resign.

At least five House Republicans, including Liz Cheney, a member of her party’s leadership team, said they would vote for impeachment.

In a break from standard procedure, Republican leaders in the House have refrained from urging their members to vote against impeaching Trump, saying it was a matter of individual conscience.

“Instead of moving forward as a unifying force, the majority in the House is choosing to divide us further,” Oklahoma Republican Tom Cole said on the House floor.

Cole was one of 139 House Republicans who voted against certifying the election results hours after the violence.

“The president of the United States instigated an attempted coup in this country,” Democratic Representative Jim McGovern said on the House floor before a procedural vote on moving forward with impeachment. “People died. Everybody should be outraged.”

Some Republicans called for the creation of a commission to study the events surrounding the siege as an alternative to impeachment.

The House previously voted to impeach Trump in December 2019 on charges of abuse of power and obstruction of Congress stemming from his request that Ukraine investigate Biden and his son Hunter ahead of the election, as Democrats accused him of soliciting foreign interference to smear a domestic political rival. The Republican-led Senate in February 2020 voted to keep Trump in office.

Wednesday’s article of impeachment accused Trump of “incitement of insurrection,” saying he provoked violence against the U.S. government in a speech to thousands of supporters near the White House shortly before the Capitol siege. During his Jan. 6 speech, Trump claimed he had defeated Biden, repeated unfounded allegations of widespread fraud and irregularities in a “rigged” election, told his supporters to “stop the steal,” “show strength,” “fight much harder” and use “very different rules,” and promised to go with them to the Capitol, though he did not.

Democrats could also use an impeachment trial to push through a vote blocking Trump from running for office again.

Only a simple Senate majority is needed to disqualify Trump from future office, but there is disagreement among legal experts as to whether an impeachment conviction is required first.