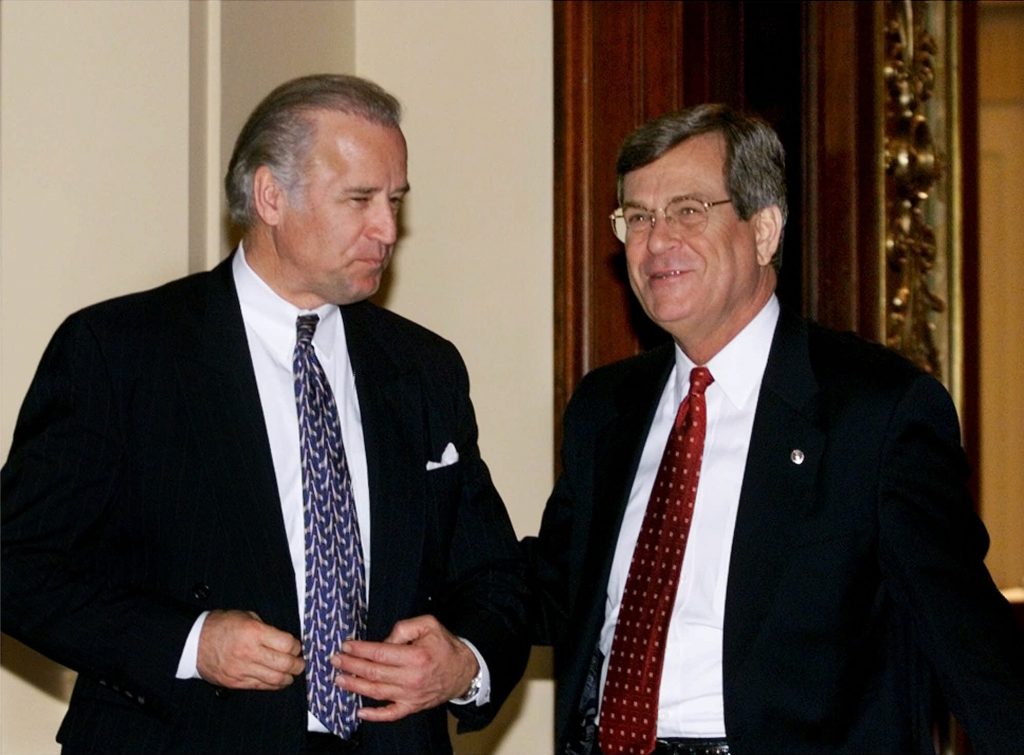 The 2001 power sharing agreement is sure to serve as the template for what the Senate looks like after President-elect Joe Biden takes office. But the world, and the chamber, has changed since that agreement was in effect.

Democrats will have the narrowest of possible majorities, with New York Democratic Sen. Charles E. Schumer of New York becoming majority leader and enabling Sen. Patrick J. Leahy, D-Vt., to be elected as president pro tempore, the senior member of the majority party.

The 2001 agreement provided for equal numbers of members on Senate committees, with a process for discharging bills and nominations that deadlock, effectively giving the Republicans at the time a narrow advantage on setting the agenda on contentious issues.

That could be all the more advantageous for Democrats in the current Senate, since a filibuster of a nomination can be cut off with a simple majority of senators, which was not the case in 2001.

“If there was a tie vote in committee, either one of us could take it to the floor,” former Mississippi Sen. Trent Lott, who was the majority leader in the last 50-50 split and an architect of the organizing resolution, said Monday in recalling the agreement.

That was not a shared agreement with the House, and so it did not apply to conference committees, a point highlighted in coverage of the 2001 deal. That means Democrats would be able to ensure majority control on any budget reconciliation conference committees, maintaining their ability to advance priorities with just a majority.

Lott, appearing at Bipartisan Policy Center with his Democratic counterpart at the time, Sen. Tom Daschle, D-S.D., said it will be up to Schumer and current Majority Leader Mitch McConnell of Kentucky to figure out a workable process.

“Mitch McConnell is a world-champ defensive player. He’s proven that. But we need a little offense. Can we do something positive for America?” Lott said. “We need it in so many ways. These two guys — we’ve got to find a way to work together.”

The 2001 agreement provided for equal levels of staffing as well as office space, which could be less complicated in the short-term given the extent of ongoing remote work for Senate personnel during the COVID-19 pandemic.

One provision of the 2001 agreement that will surely face more scrutiny between now and Jan. 20 is that Lott and Daschle agreed that neither leader would use the process of filling the amendment tree, a procedural tool that precludes the offering of amendments. The Senate in recent years under both former Sen. Harry Reid of Nevada and McConnell has regularly blocked amendments — to the frustrations of senators from all corners of the chamber.

The hunt for an agreement comes amid the possibility that the Senate could also face an impeachment trial as it attempts to organize itself, with the House preparing to once again impeach outgoing President Donald Trump for his role in inciting last week’s attack on the Capitol.

There is a possibility that the House could impeach Trump and then hold back the paperwork to prevent triggering a trial that could undermine the Biden agenda. The president-elect told reporters in Delaware on Monday he was trying to see whether it was possible to “bifurcate” the process on the Senate floor.

“Can we go half-day on dealing with impeachment, and half-day getting my people nominated and confirmed in the Senate, as well as moving on the package,” Biden said, adding that the matter needed to be discussed with the Senate parliamentarian.

Biden, who was in the Senate for the impeachment trial for President Bill Clinton, is also quite familiar with the oddity of the tied Senate.

Biden was briefly chairman of the Foreign Relations Committee at the start of the 107th Congress, when Vice President Al Gore was still in office and on hand to break ties in favor of Democrats. When Dick Cheney was sworn into office on Jan. 20, 2001, majority control went back to the Republicans, who had been in the majority the three previous congresses, and Biden handed the gavel to North Carolina Republican Jesse Helms.

This time, Senate committees, which are still controlled by the GOP senators who led them in the last Congress until there are organizing resolutions adopted, seem to be taking their time when it comes to scheduling hearings for even some of the most important national security-related Cabinet posts.

Even though the chairmen and ranking members of committees for the 117th Congress are forgone conclusions, only two Senate panels have yet scheduled confirmation hearings for members of the Biden cabinet.

The Armed Services Committee has scheduled a hearing for the afternoon of Jan. 19, the day before inauguration, on the nomination of Lloyd Austin to be Defense secretary. That may be the only hearing that goes forward before the Biden presidency officially gets under way or before committees organize for the new Congress.

The Veterans Affairs Committee has scheduled a Jan. 27 hearing on former White House Chief of Staff Denis McDonough’s nomination to lead the Department of Veterans Affairs, at the same session as the panel adopts its organizing resolution.