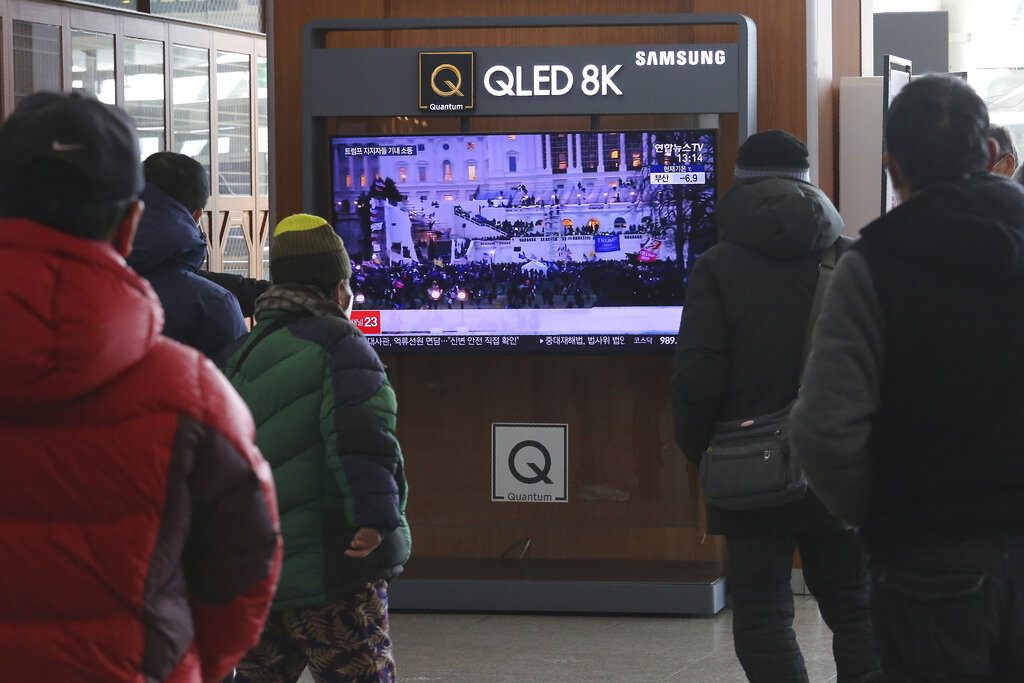 As the world watched American institutions shaken to the core by an angry mob, officials and ordinary citizens wondered: How fragile is democracy?

Allies spoke up, expressing shock and dismay at the chaos.

Canadian Prime Minister Justin Trudeau said in a statement, “Canadians are deeply disturbed and saddened by the attack on democracy in the United States, our closest ally and neighbour. Violence will never succeed in overruling the will of the people. Democracy in the US must be upheld – and it will be.”

Israeli Prime Minister Benjamin Netanyahu said during a press conference with Treasury Secretary Steven Mnuchin “American democracy has always inspired me. Lawlessness and violence are the opposite of the values we know Americans and Israelis cherish. The amperage of the Capitol yesterday was a disgraceful act and it must be vigorously condemned.”

In Germany, Chancellor Angela Merkel was unusually blunt Thursday, drawing a direct line from President Donald Trump’s refusal to concede his election defeat to the atmosphere that made the storming of the U.S. Capitol by his supporters possible.

“A fundamental rule of democracy is that, after elections, there are winners and losers. Both have to play their role with decency and responsibility so that democracy itself remains the winner,” Merkel said.

Even the United Nations offered up the kind of statement usually reserved for fragile democracies, expressing sadness and calling on unidentified political leaders to foster respect for “democratic processes and the rule of law.”

In China, which has had constant friction with Washington over trade, as well as military and political issues, people were scathing in their criticism of Trump and his supporters, citing both the coronavirus pandemic and the mob action.

Communist-ruled China has long accused the U.S. of hypocrisy in its efforts to promote democracy and advocate for human rights overseas.

The Communist Youth League ran a photo montage of the Capitol violence on its Twitter-like Weibo microblog with the caption: “On the sixth, the U.S. Congress, a most beautiful site to behold.” That appeared to mock House Speaker Nancy Pelosi for her June 2019 comments in praise of sometimes- violent anti-government protests in Hong Kong.

Iran, which faces routine U.S. criticism over violations of human rights and democratic values, jumped on the chaos as proof of American hypocrisy.

Some legislatures in Asia — South Korea and Taiwan, for instance — have at times been marred by brawls and screaming matches, but democracies throughout the region are normally staid versions of European and American lawmaking models.

“This is shocking. I hope this will serve as chance for the Americans to review their democracy,” said Na HyunPil at the Korean House for International Solidarity, a Seoul-based NGO. “Trump is entirely responsible for this incident. After his four-year rule, the Americans find it difficult to tell other countries that their country is a good model for democracy.”

Several countries, both U.S. allies and antagonists, issued travel warnings to their citizens, although with coronavirus infections soaring in the United States, arrivals from abroad are down to a trickle.

Ally after ally expressed shock, followed by affirmations that U.S. democratic institutions would withstand the turmoil.

“All my life, America has stood for some very important things: an idea of freedom and an idea of democracy,” said British Prime Minister Boris Johnson. “Insofar as he encouraged people to storm the Capitol, and insofar as the president has consistently cast doubt on the outcome of a free and fair election, I believe that was completely wrong.”

For others, less friendly, it was portrayed as a last gasp and one that belonged solely to Americans themselves.

“American democracy is obviously limping on both feet,” said Konstantin Kosachev, head of the foreign affairs committee in Russia’s upper house of parliament. “I say this without a shadow of gloating. America no longer charts a course and therefore has lost all rights to set it — and even more so to impose it on others.”