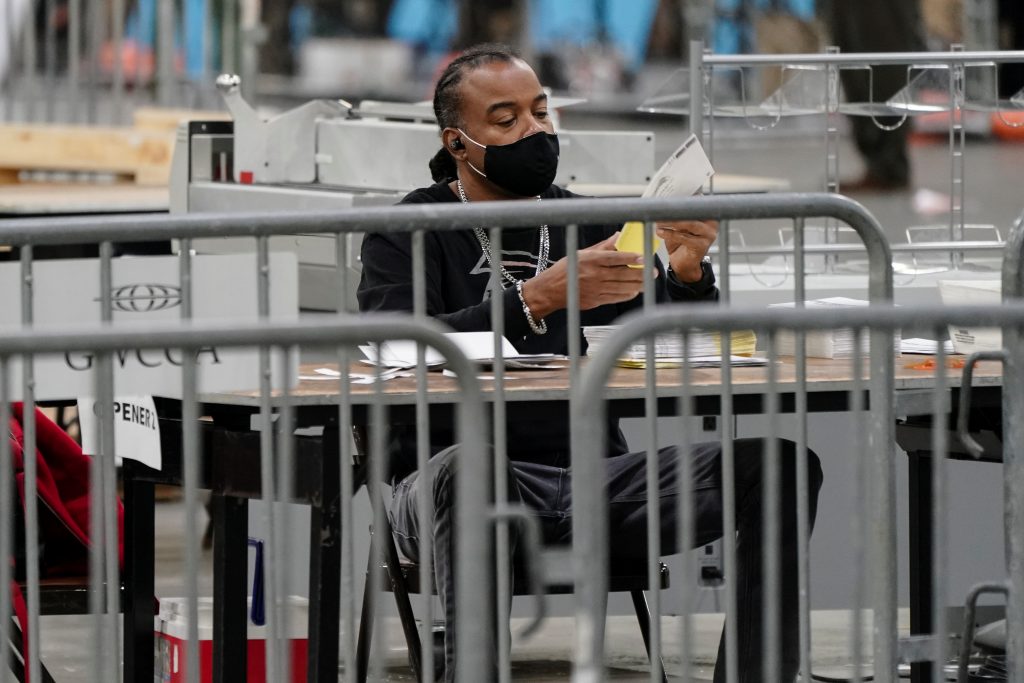 Democrats and Republicans were locked in tight U.S. Senate races in Georgia on Tuesday as final votes were counted in a showdown that will decide whether President-elect Joe Biden enjoys control of Congress or faces stiff Republican opposition to his reform plans.

The leads swung back and forth between Republican incumbents David Perdue and Kelly Loeffler and Democratic challengers Jon Ossoff, a documentary filmmaker, and the Reverend Raphael Warnock, a pastor at a historic Black church in Atlanta.

With 96 percent reporting, Warnock was ahead of Loeffler by less than a percentage point and Ossoff had pulled into a dead heat with Perdue, according to Edison Research.

Warnock and Ossoff made big gains on the Republicans after a batch of votes was reported from Democratic-leaning DeKalb County.

An Edison exit poll of more than 5,200 voters found half had voted for Trump in November and half for Biden. The voters were also evenly split on whether Democrats or Republicans should control the Senate.

The survey included both early voters and voters who cast ballots on Tuesday.

Democrats must win both contests in Georgia to take control of the Senate. A double Democratic win would create a 50-50 split in the Senate and give Vice President-elect Kamala Harris the tie-breaking vote after she and Biden take office on Jan. 20. The party already has a narrow majority in the House of Representatives.

If Republicans hold even one of the two seats, they would effectively wield veto power over Biden’s political and judicial appointees as well as many of his legislative initiatives in areas such as economic relief, climate change, healthcare and criminal justice.

No Democrat has won a U.S. Senate race in Georgia in 20 years, but opinion surveys showed both races as exceedingly close. The head-to-head runoff elections, a quirk of state law, became necessary when no candidate in either race exceeded 50% of the vote in November.

Biden’s narrow statewide win over Republican President Donald Trump in the Nov. 3 election – the first for a Democratic presidential candidate since 1992 – has given the party reason for optimism in a state dominated by Republicans for decades.

Edison expected a total of 4.4 million ballots to be cast, including the more than 3 million early votes that shattered the record for runoff elections even before Election Day arrived. The two races drew nearly half a billion dollars in advertising spending since Nov. 3, a staggering total that fueled a tsunami of advertising.

In Smyrna, about 16 miles (26 km) northwest of Atlanta, Terry Deuel said he voted Republican to ensure a check on Democratic power.

At a rally in Georgia on Monday night, Trump again declared the November vote “rigged,” an assertion some Republicans worried would dissuade his supporters from voting on Tuesday.

His attacks appear to have undermined public confidence in the electoral system. Edison’s exit poll found more than seven in 10 were very or somewhat confident their votes would be counted accurately, down from 85% who said the same in a Nov. 3 exit poll.

If elected, Warnock would become Georgia’s first Black U.S. senator and Ossoff, at 33, the Senate’s youngest member. Perdue is a former Fortune 500 executive who has served one Senate term. Loeffler, one of the wealthiest members of Congress, was appointed a year ago to fill the seat of a retiring senator.